Looking for a little clarity on this week’s news? Windermere Chief Economist Matthew Gardner looks at last week’s real estate and economic announcements, explaining what the data and numbers mean, especially in the context of COVID-19.

I’ve decided that we are going to change things up just a bit. Although I will certainly be addressing any new, real estate-related news that might come to light as we move through the rest of the year, my plan is to talk to you about the real estate and economic announcements that were made during the prior week and really go beyond the headlines. That way, you can not only stay on top of the issues that affect you but also get more detail than is generally offered by the media.

The national index level rose by 4.3 percent year over year in June, which was essentially unchanged from the gain seen in May. I was pleased to see the index leveling off following the COVID-19-induced drop that was seen in April. 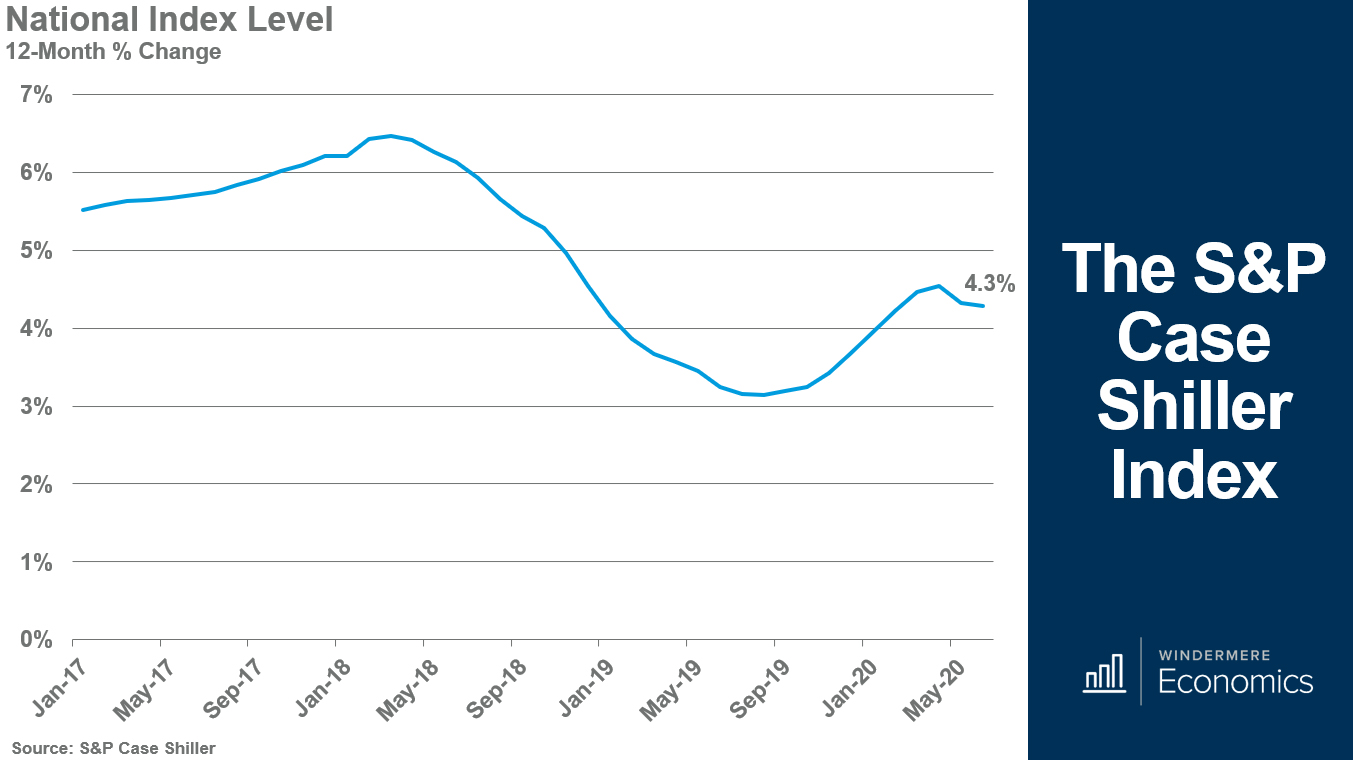 And when we look at the cities that make up the index, Phoenix, Seattle and Tampa, Florida continue to post the strongest annual gains among the 19 cities. We all know that there are 20 cities in the index, but Detroit is still excluded because of ongoing COVID-19-related reporting issues.

It was also interesting to see that five of the 19 cities saw higher year-over-year price gains in June than seen in May. 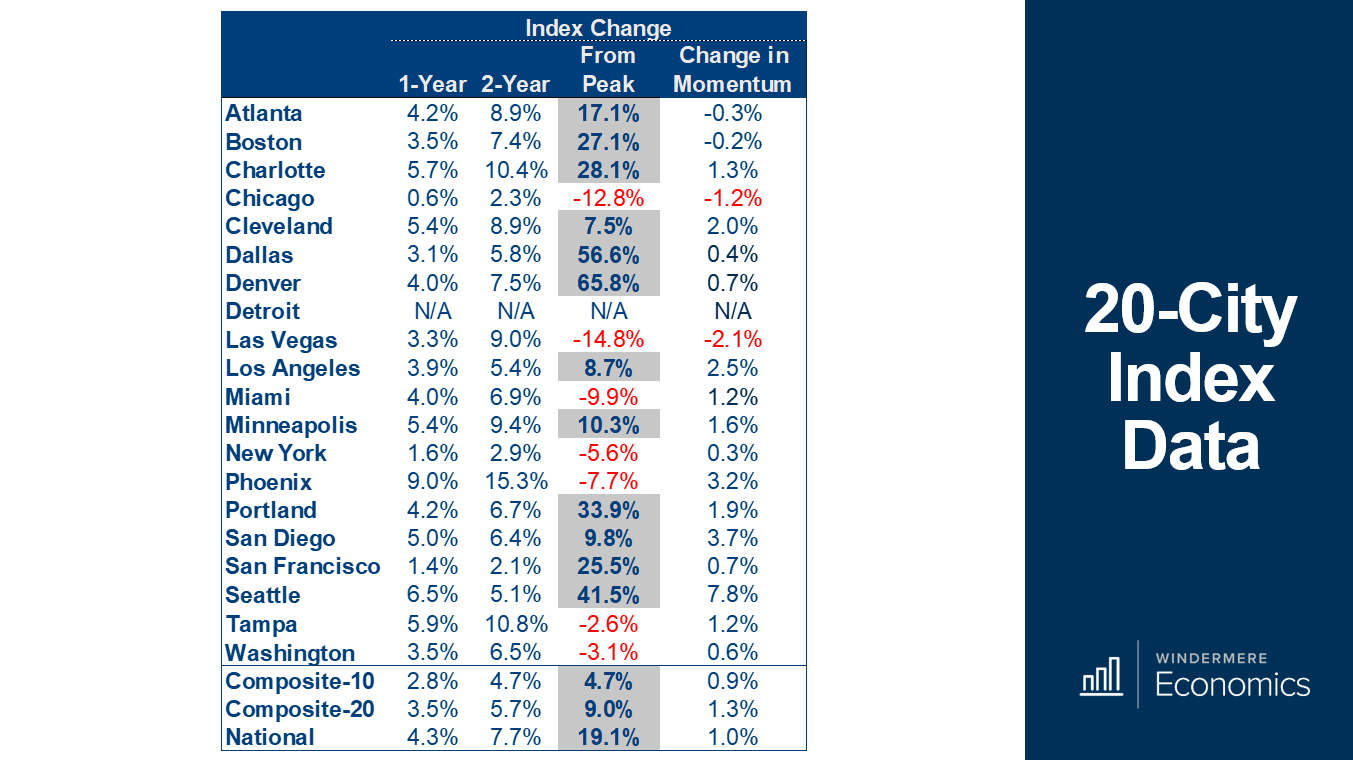 Now, you will see in this table that I add a column on the right that shows the change in momentum. This looks at the percentage change over the past 12 months relative to the 12 months before that. As you can see, all except for two cities — Chicago and Las Vegas — have seen their index levels rise faster over the past year than the year before that.

I thought about why this may be the case, and I wonder whether Chicago is being negatively affected by ongoing civil unrest. I also wonder whether Las Vegas’ very significant exposure to the leisure and hospitality industry might be slowing price gains there.

The bottom line is that prices have rebounded from the modest COVID-related drop. I anticipate that we will see the national index show annual price growth in the mid to high 4 percent range for the rest of the year.

Next up — new home sales!

New home sales surged by 13.9 percent month over month in July to a seasonally adjusted annual rate of 901,000. That’s very significant because it represents the strongest pace of sales growth we’ve seen since December of 2006, and it’s also noticeably higher than the pre-pandemic pace of 774,000 that we saw back in January. Oh, do you see the “V”? 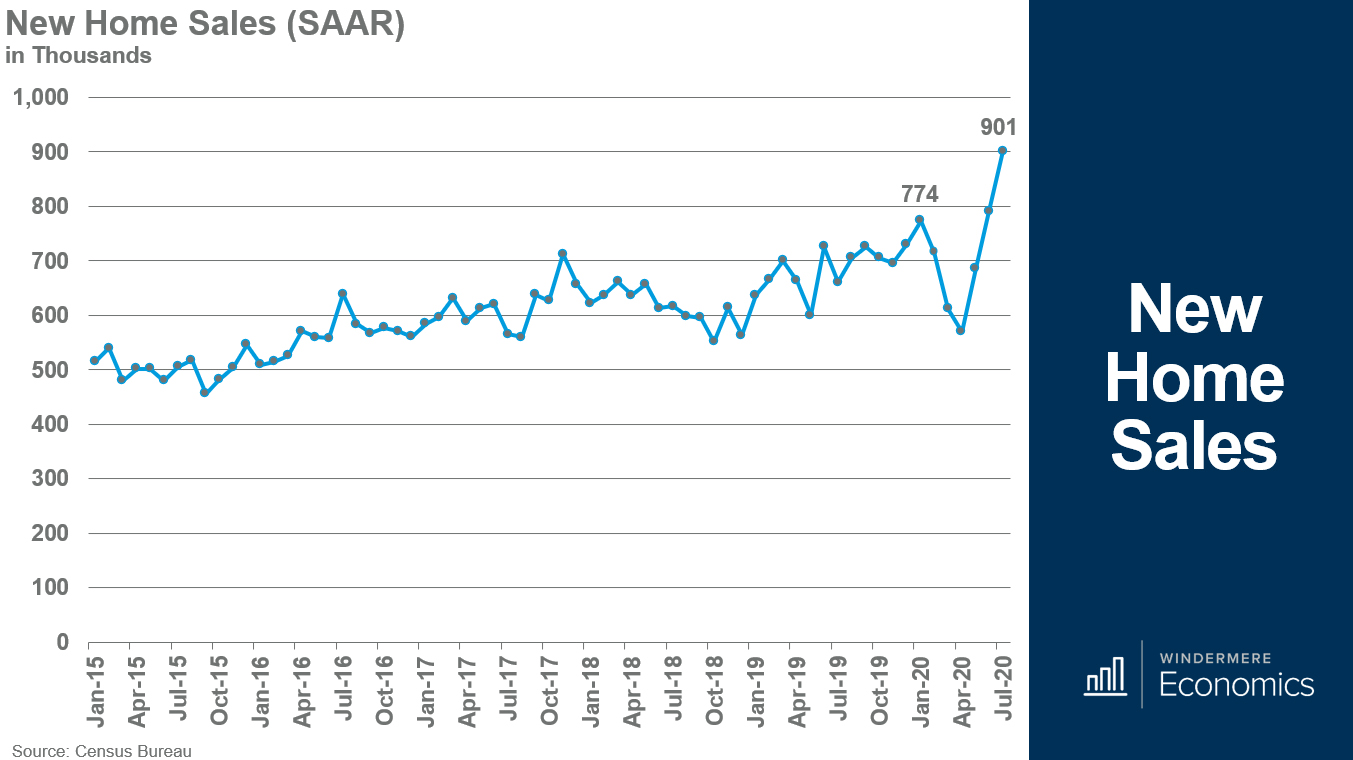 Anyway, this is the third consecutive month of sizable increases in sales after they pulled back dramatically in March and April.

Looking regionally, sales growth in July was strongest in the Midwest and the South. Sales were down 23 percent in the Northeast, but I’m not overly concerned. The Northeast part of the country does tend to be the most volatile area as it has the smallest concentration of new construction activity.

As for other regions, sales were up by 7.8 percent here in the West. That wasn’t a great number, but sales are still up by 41 percent year over year.

And strong demand drew down the inventory of new homes for sale. There were only 299,000 new single-family homes for sale at the end of July. That’s 8.8 percent lower than a year ago, and current inventory levels are as low as they’ve been since 2013. 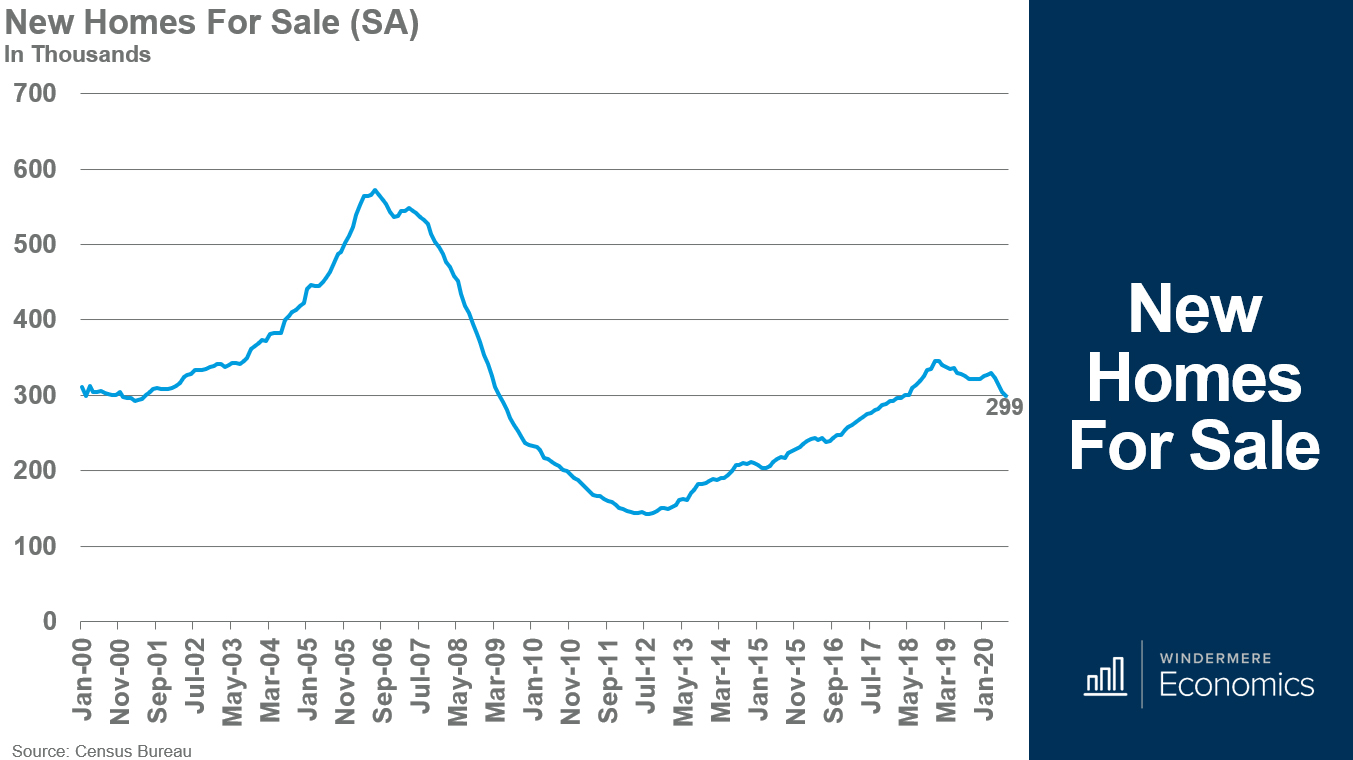 My takeaway from the report is that new home sales are healthy and will presumably remain that way given the limited supply of existing homes for sale, low mortgage rates, ongoing pent-up demand and an emerging, coronavirus-driven shift by some city dwellers who are now looking at possibly moving to the suburbs.

Unfortunately, countering positive news on the new-home front was the Conference Board’s Consumer Confidence Index for August, which dropped to 84.8 from 91.7 in July and is now at a new pandemic low. 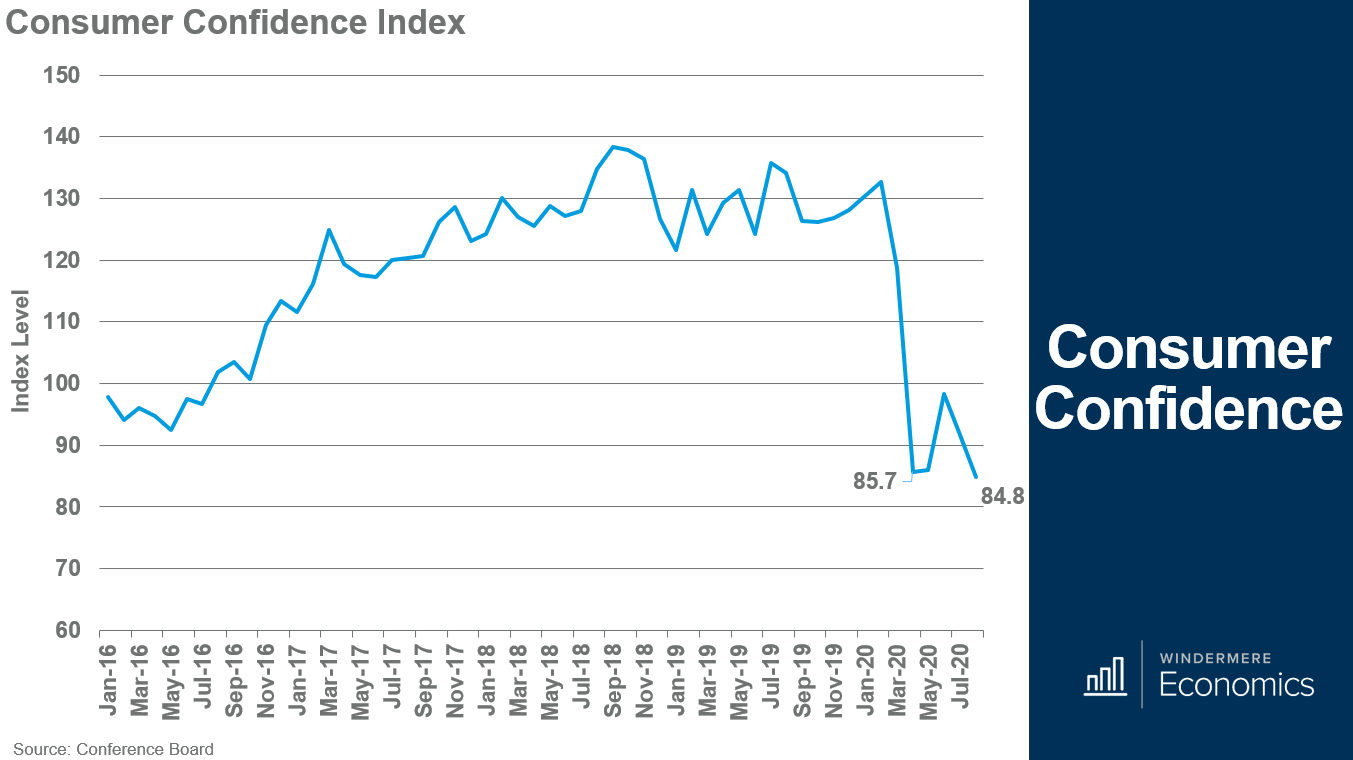 The drop surprised everyone, including me. It puts the index below April’s reading — and that was at the height of the economic lockdown.

I’ve been thinking about why this drop occurred, and I believe that it was likely due to July’s expiration of the $600 federal unemployment stipend. Even if the president has now authorized temporary $300 payments, not every state is providing the money. This may well have affected confidence levels.

I also think that the drop may be — at least in part — due to consumers’ realization that the COVID-19 impact on the economy may very well last longer than they had been expecting, and therefore more difficult for them to navigate if consumers they don’t see more fiscal stimulus.

Now, let’s look at the US Pending Home Sales index

Looking regionally, pending sales rose by 25.2 percent in the Northeast versus June and were up 20.6 percent from a year ago. In the Midwest, sales rose 3.3 percent monthly and 15.4 percent annually. 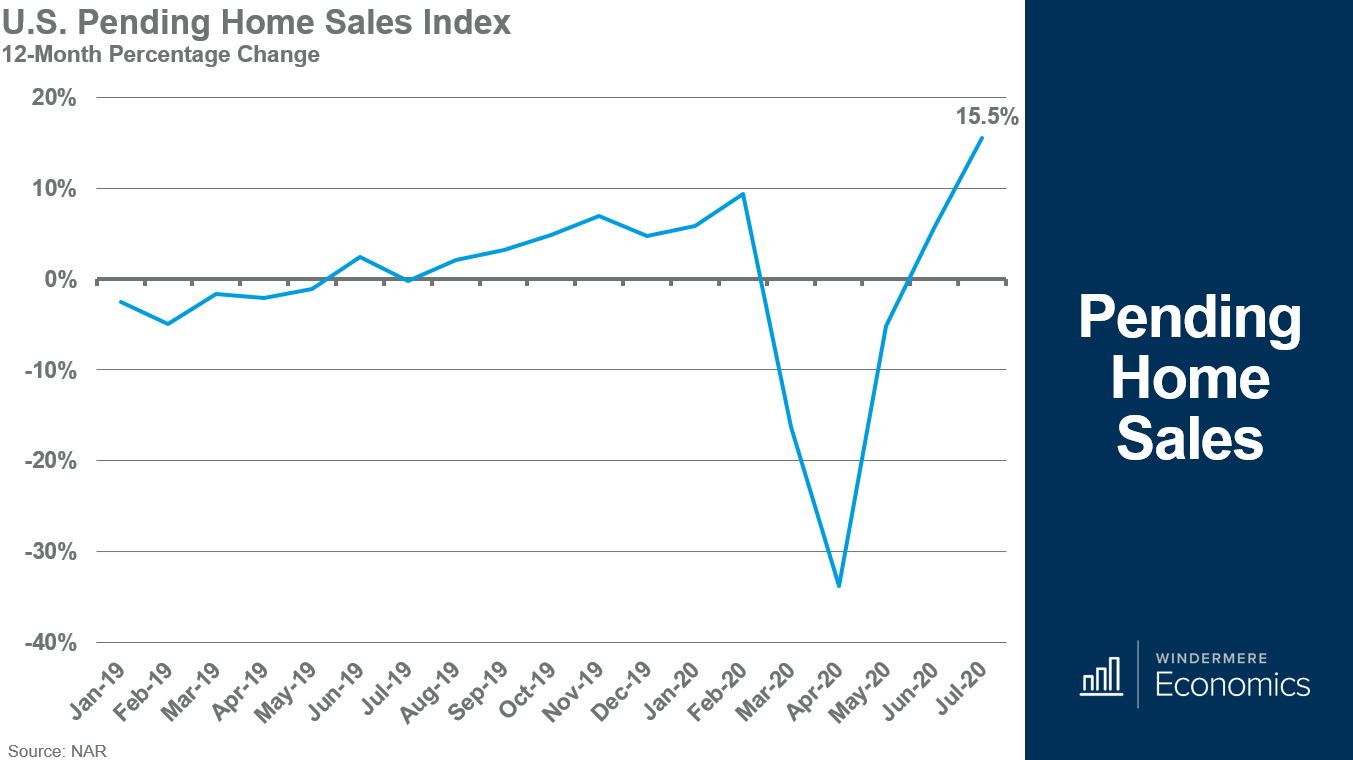 Pending home sales in the South rose just 0.9 percent for the month but were up 14.9 percent from July 2019, and sales in the West rose 6.8 percent monthly and were 13.2 percent higher than a year ago.

Sellers are seeing their homes go under contract in record time, and, as much as it’s my job to find anything that might trip the market up, I just don’t see anything. I believe that we will continue to see a very brisk market for the balance of the year.

Now, because of this I have, yet again, upwardly revised my forecast for existing home sales in 2020 and now expect that the market will trade 5.2 million units this year with the annualized pace in the second half of the year coming in at 5.5 million units. To tell you the truth, the number would be even higher if there were more homes for sale.

The index has been, shall we say, interesting, over the past few months with a massive drop seen in March and April, little movement in May, a dead cat bounce in June with a pullback in July and, finally, a slight improvement in August. 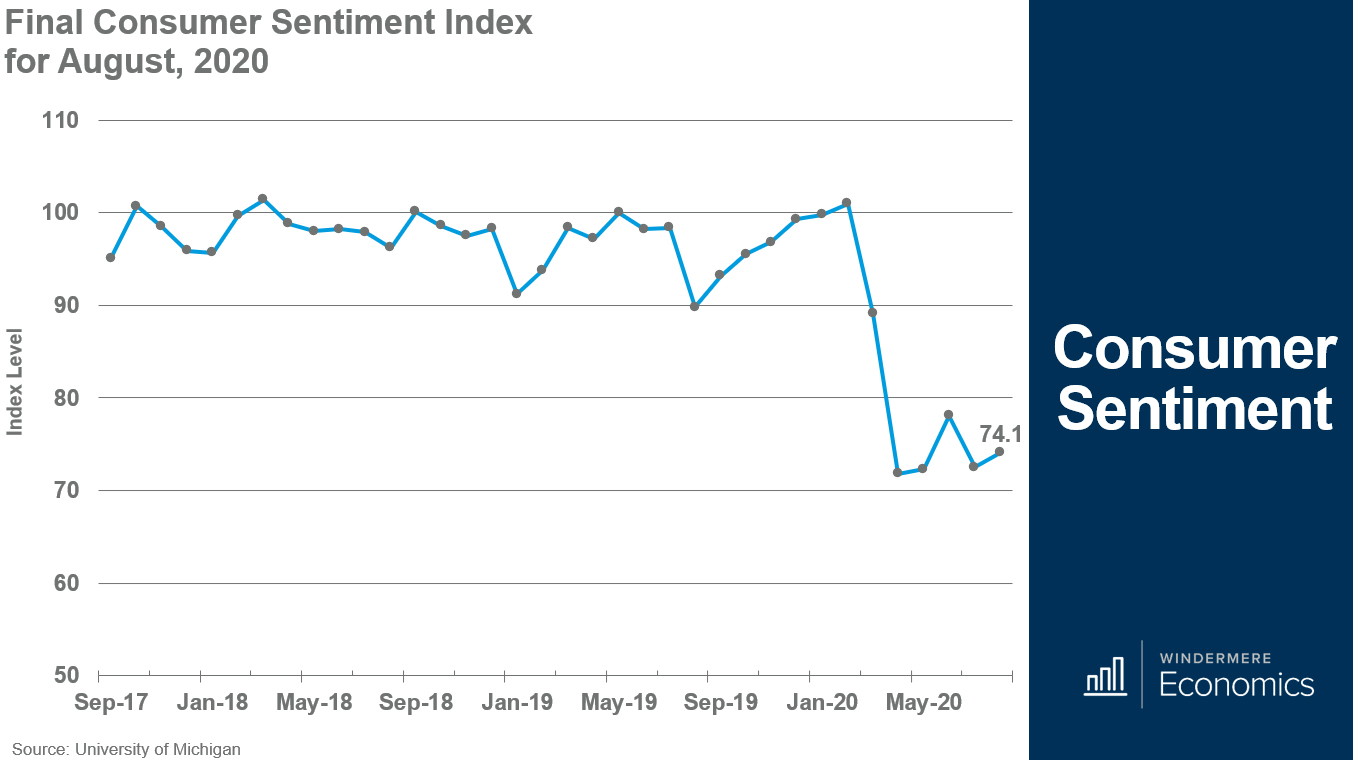 So what does this mean? Well, at the headline level, it appears that Americans regained a small amount of confidence in the path of an economic recovery in late August. I say “late” as the index is published twice a month, and this is the final August number that was revised up to 74.1 from the preliminary figure of 72.8.

You can see that the Current Conditions index jumped following the April shutdown of the economy. This may be counterintuitive, but in reality, it was only because a sizable number of consumers thought that conditions really couldn’t get any worse. 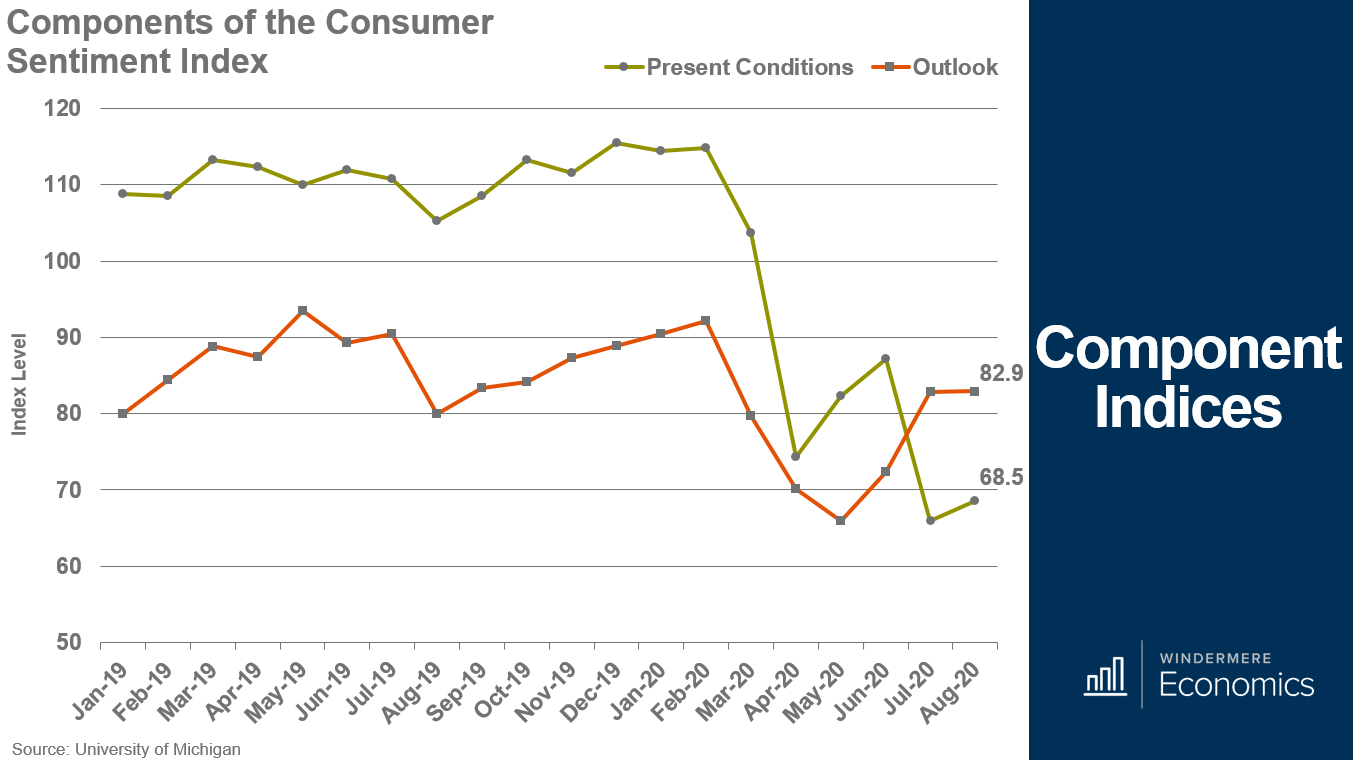 But as the effects of the pandemic continued, it wasn’t surprising to see consumers’ attitudes worsening, and you can see that in the drop between June and July. In fact, 62 percent of respondents judged that the overall conditions in the economy today could be best described as “unfavorable.” Again, I put this down to the fact that consumers are uncertain as to whether Congress will help them out further.

But the expectations line is different and suggests that, though we aren’t happy today, we still believe that things will get better in the year ahead.

So, the bottom line on the Sentiment number is that we still aren’t comfortable with where the economy stands today, but our outlook is still pretty positive.

So, those are my thoughts on last week’s big news items. Coming up this week, we’ll have data on U.S. construction spending. Now, that’s been contracting for the past four months, but I do expect to see some modest gains in the July numbers.

But the big story will be the U.S. payroll report for August. Here I am looking for the data to show that more jobs have returned, but I do expect that the pace of recovery is likely to have slowed further from the 1.76 million jobs that returned in July.