First-ever virtual Realtors Conference & Expo kicked off on Monday with a discussion about controversial proposed changes to the National Association of Realtors’ Code of Ethics.

The National Association of Realtors’ first-ever virtual annual conference kicked off Monday with a forum discussion on controversial changes to the 1.4 million-member trade group’s professional standards to crackdown on racist and discriminatory speech and behavior among members.

If implemented, the changes would apply NAR’s Code of Ethics and Standards of Practice to all of a Realtor’s activities, not just those related to real estate; would prohibit hate and harassing speech against protected classes; would prohibit all discrimination, not just willful discrimination, against protected classes; and would recommend that ethics violations be considered under membership qualification criteria, among other changes.

NAR’s Professional Standards Committee, which has more than 100 members, approved the proposed policies at an Oct. 5 special meeting and made no changes to the proposals when they discussed them Monday morning, a NAR spokesperson told Inman. The committee spent the morning discussing feedback some of its members have received about the proposals, which NAR’s board of directors will vote on Nov. 13, the spokesperson said.

“[W]hen governance and committee meetings are held in person every year, roughly two dozen meetings are closed or held by invitation to committee and group members only in order to facilitate frank and transparent discussions and because fear of having comments misrepresented or misconstrued in the public can sometimes be detrimental to this process,” a NAR spokesperson said in an emailed statement.

“In addition, a number of meetings are open each year to members only in order to ensure those involved are be able to speak freely regarding the direction in which they would like to see their association move. Regarding the two Conference sessions closed to the press this year, many celebrities and special guests request no press as a condition of speaking.”

NAR said it will provide Inman a copy of the board of directors packet laying out all of the proposals to be voted on before the meeting as the trade group has done in the past.

‘They’re allowed in, but you’re not’

In the video, JoAnne Poole, a former president of the Maryland Association of Realtors and a NAR Distinguished Service Award recipient, described a time when she, a black woman, showed up at a home with her buyer clients, a white couple, and the owner opened the door and said, “They’re allowed in, but you’re not.”

Her clients said they would not go in without her and walked away from the home even though it matched everything they wanted. She reported the incident to the listing agent who said, “Oh well, it was the owner’s decision.”

“That is not pro standard stance,” Poole said. “Absolutely not.”

“But that’s the position that they decided to take that has happened multiple times, just over a few years. It has cost. I don’t know if it cost me more in embarrassment or in money in my pocket.”

“This is one that I don’t think I’ll ever really get over and it really happened more than once,” she added.

Not referring to general offensive speech 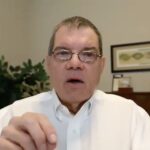 Bruce Aydt, a member of the committee advisory board that came up with the policy recommendations, emphasized that the policy is not referring to general offensive speech, but rather speech intended to offend because of a trait that falls under the above protected classes.

“This isn’t just about speech that is stating an opinion about a political issue. This is very specific things talking about hate speech, harassing speech, epithets and slurs,” he told forum attendees.

“It’s really a two-step analysis. 1.  Is the speech harassing speech, hate speech, epithets or slurs? If so, 2. Is that based upon the protected classes? If it does not fall in one of those two categories, it is not in fact falling under Standard of Practice 10-5.”

The policy says examples of harassment include, but are not limited to, “Epithets, slurs, or negative stereotyping; threatening, intimidating or hostile acts; denigrating jokes; and the display or circulation of written or graphic material that denigrates or shows hostility toward an individual or group based on a protected characteristic.” 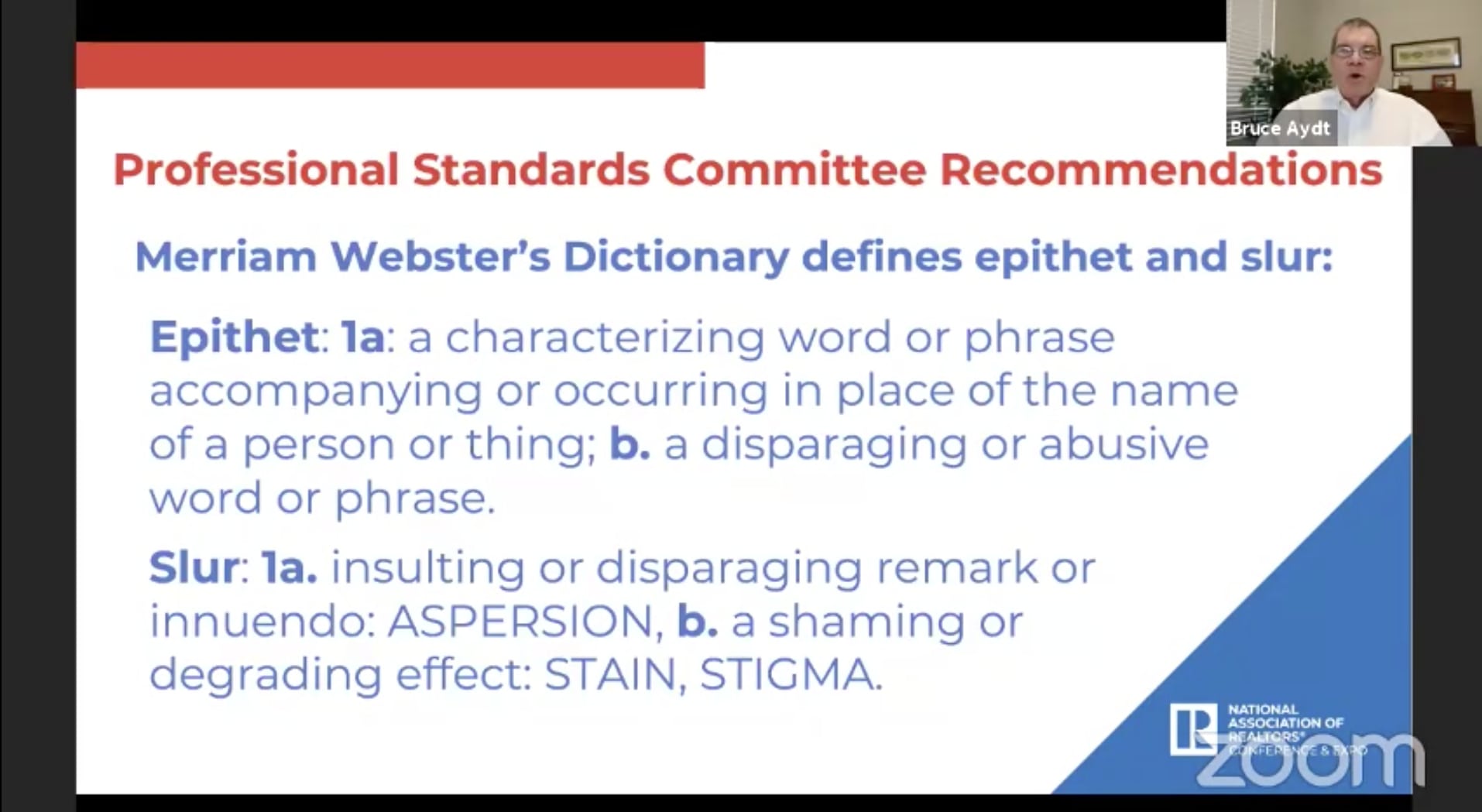 A new appendix to NAR’s Code of Ethics & Arbitration Manual takes these basic definitions of harassment and epithets and slurs and explains that hearing panels can use them as guidance to decide these types of cases, Aydt said.

The policy proposals also recommend the definition of “public trust” in the code be expanded to include all discrimination, not just willful discrimination, against the protected classes under Article 10 of the Code of Ethics, and all fraud, not just fraud resulting in substantial economic harm. So that part of the code would read: 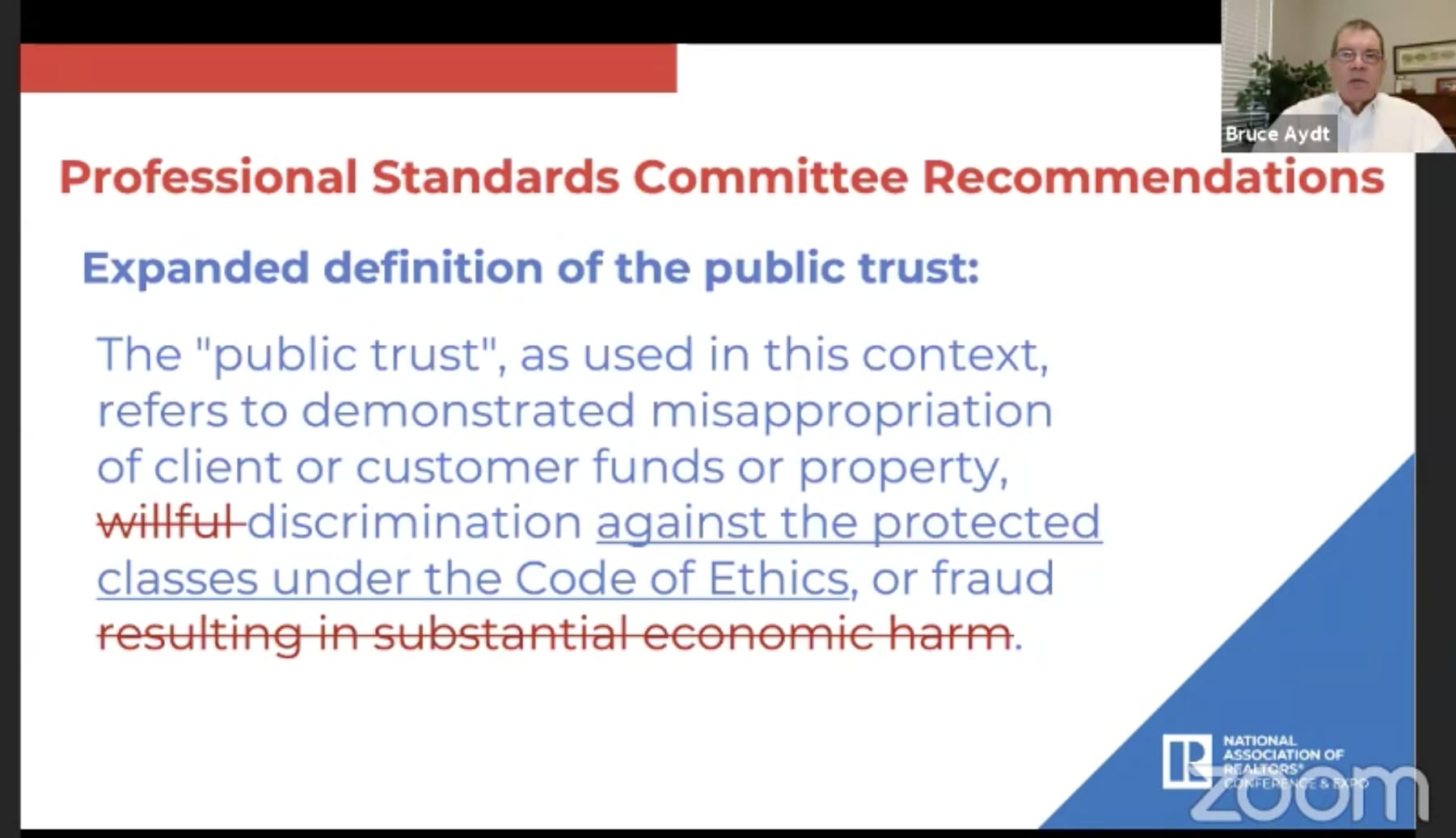 This is to make the definition consistent with Article 10 of the Code of Ethics, which prohibits denying equal professional services to anyone in the above-mentioned protected classes and does not say that discrimination must be willful, according to Aydt. Similarly, Article 2 of the code, which prohibits Realtor misrepresentation, also does not say that there has to be substantial economic harm, he said.

Aydt stressed that offensive speech would only be in violation if it targets a protected class.

“So in other words, it’s ‘Hey, you are XYZ category and I don’t think you belong here.’ It’s not just simply a political statement about one side of a political argument or another,” Aydt said.

“It’s not something that is just politically correct or not. This is something really offensively, outstandingly, that falls into the category of intimidating somebody because of their membership in one of the protected classes.”

Matt Difanis, chair of the committee, offered examples of what is and is not hate speech. 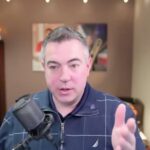 “Somebody who says, ‘I take issue with the political organization Black Lives Matter,’ staking out a political position: not hate speech. Declaring on social media that Black lives don’t matter, that would be hate speech,” he said.

“Somebody who says, ‘I don’t believe as a matter of policy that a trans female should be competing against bio females in high school sports,’ that’s not intended to harass on the basis of somebody’s gender identity. But if instead somebody says that all trans women are abominations before God and puts that on social media, now you’re into hate speech.

“So we want to be really clear that we were painstakingly detailed in trying to make this targeted. A lot of the things, people say, ‘Well that would relate to a protected class and so therefore it’s going to fall within the scope of this.’ No, almost all of those examples that we’ve all seen would be no, that ought not even be close.”

Aydt stressed that the proposed policies wouldn’t have professional standards enforcers “sniffing around every facet of your personal life.”

Aydt clarified that the new policies, if approved, would not be retroactive. If the NAR board approves the policies as currently written, they would go into effect Nov. 13 and no conduct prior to that date could be used as a complaint, Aydt said.

One attendee asked whether the additional protected classes under a state or municipality’s laws would fall under the proposed policies.

“No, because Article 10 of the code specifically talks about the nine protected classes that we have in the code,” Aydt said.

Another attendee asked if NAR could risk legal action from the U.S. Department of Justice for illegally tying activities by regulating all member conduct, not just real estate-related activities, in order to access Realtor-affiliated multiple listing services.

“All of the recommendations have been run through at least three levels of counsel. Our committee counsel, the general counsel of the national association and outside counsel as well, Aydt said.

“In addition to that, the recommendations have been shared with over 200 attorneys who attended [a] legal seminar as well as several attorneys at large firms, and that issue has not come up at all. It’s been thoroughly vetted through many different levels of counsel, both in-house and out-of-house.”

Many of the “most egregious” examples of hate speech that NAR is aware of have been posted on social media, not just as written commentary, but also as videos, according to Difanis.

“Realistically social media is going to likely be the most common source of these complaints because social media lends itself to reposting, resharing and screenshotting,” he said.

Quoting Poole, he noted that “‘This is not new. People have smartphones, that’s what’s new. More often it’s being recorded and captured and shared and reposted, but it’s not new, and it’s still running rampant.'”

An attendee asked if ‘Likes’ or posts on Twitter or Facebook could be deemed hate speech or harassment and another asked “If we stayed or listen and laugh at denigrating jokes in a social media setting or in a social setting for that matter, could we be charged under this proposal?”

“Certainly it’s a bad idea to jump on the bandwagon, but again if somebody clicks ‘Like’ because they didn’t read it or because it’s from a friend and they did it reflexively or they literally had a stray mouse click, that seems like it’s unlikely to result in a complaint.

“It may result in a complaint, but by the time you put in all those due process hurdles, it seems very unlikely to result in an actual finding of a violation, unless the person was reposting amplifying the sentiment, that sort of thing.”

Hearing panels will consider the context of a particular post and the circumstances surrounding it, Aydt added.

The forum devoted about 35 minutes, half its meeting time, to the proposed policies. Some questions remained outstanding, including how NAR will balance religious beliefs when those beliefs may insult or offend based on sexual orientation or gender identity, whether a Confederate flag bumper sticker or other political bumper stickers could be violations, whether the term “white privilege” could be a violation, how the proposed policies would affect broker liability, and how local and state associations will be required to enforce the policies. Inman will update this story if and when we hear back. 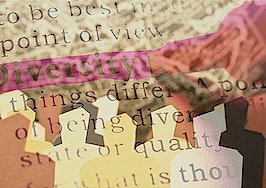 Systemic change happens within: 4 ways to do your part 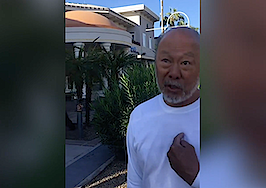 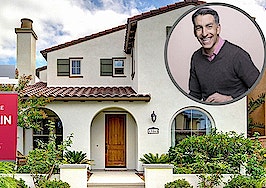