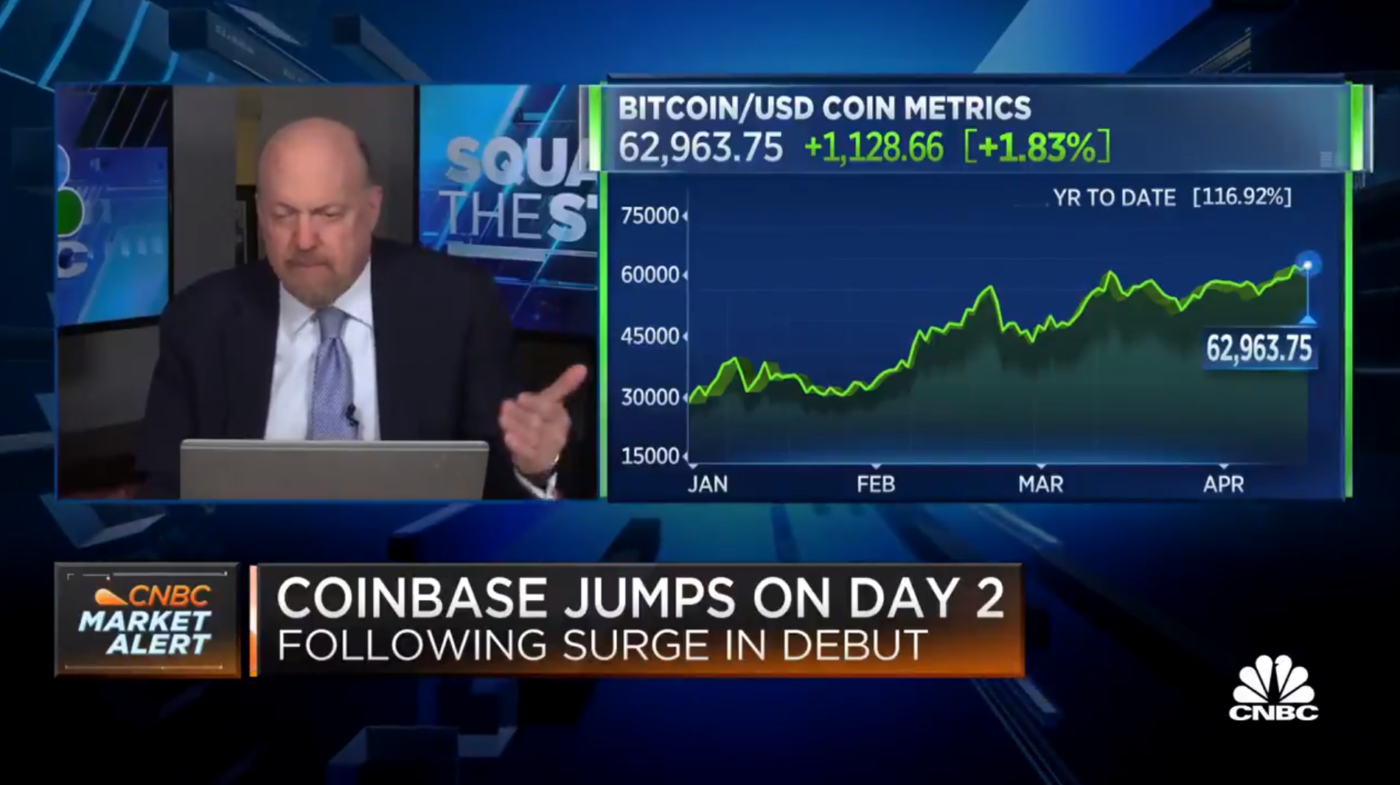 It’s a classic dilemma that’s a staple of every personal finance guru’s content diet: Use a financial windfall to pay off your mortgage, or invest?

If your name is Jim Cramer and you make a living giving people investment advice on TV, expect to be roasted if your answer is pay off your mortgage — particularly when rates are still near historic lows.

The CNBC Mad Money host revealed that after buying “a lot of bitcoin” back when it was at $12,000, he’s been selling “all the way up” and has now unloaded about half of his position.

With bitcoin now trading above $60,000, Cramer said his bitcoin profits allowed him to pay off his mortgage this week.

“I now own a house, lock, stock and barrel, because I bought this currency (bitcoin),” Cramer said. “So … I don’t know, I think I won!”

Cramer joked that he might have been the only “natural seller” of bitcoin this week — somebody who actually owns the virtual currency, as opposed to riskier options or derivatives that can be subject to forced sales or margin calls.

“But it was so great to pay off a mortgage. It was like, phony money paying for real money!” he said while appearing on “Squawk on the Street.”

Cramer said he knew his revelation would “make a lot of people angry,” but he “decided to become an apostate” anyway.

Sure enough, critics were quick to pounce on Twitter:

Assuming that Cramer would probably have been paying only about 3 percent interest on his mortgage, @HodlDepot questioned whether he’d be better off investing the money that’s now tied up in his home:

NOT TO MENTION THAT MORTGAGE DEBT IS THE LEAST EXPENSIVE FORM OF DEBT FINANCING AVAILABLE TO AVERAGE AMERICANS.

PAYING OFF 3% 30-YEAR MONEY THAT IS NOT MARKED TO MARKET IS ONE OF THE MOST DEMONSTRABLY IDIOTIC FINANCIAL DECISIONS ONE COULD MAKE.

With interest rates near historic lows, “It’s like the mortgage is the asset while the house is the liability,” @marenaltman quipped:

the irony of this is that with today’s interest rates, it’s like the mortgage is the asset while the house is the liability

Another critic, @JoshManMode, let a meme do the talking:

Paying off his mortgage? pic.twitter.com/B1dfOeN8jg

If Cramer is having any regrets, @beeforbacon1 suggested a quick fix:

What’s your take? Was Cramer smart to retire his home loan, or is this a good time to have a mortgage and an aggressive investment strategy?

Color me bad: The wrong shade of paint can cost sellers big bucks

The risks of taking out cash against a home in today's market
Back to top
Network with CoStar, Redfin, Realogy, SERHANT., Divvy, and thousands more in-person at ICLV this October. Prices go up Sunday.Register Now×
Inmanpot
Log in
If you created your account with Google or Facebook
Don't have an account?
Create an Account
Forgot your password?
No Problem