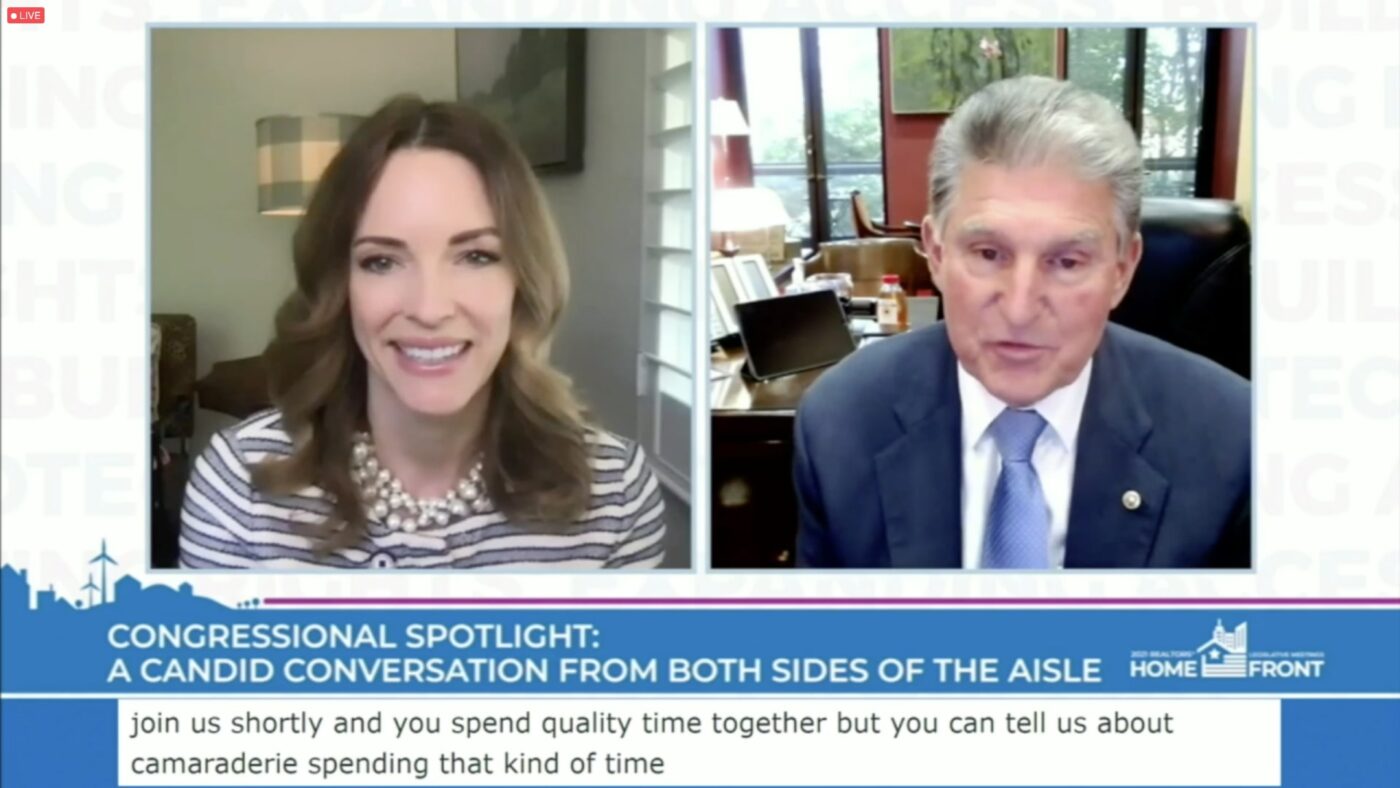 From left: Shannon McGahn and Joe Manchin at Realtors Legislative Meetings, May 2021

U.S. Sen. Joe Manchin, a Democrat, and Shelley Moore Capito, a Republican, discussed making deals across the aisle at the National Association of Realtors’ midyear conference.

U.S. Senator Joe Manchin (D-West Virginia), arguably the most powerful man in America, took the virtual stage at the National Association of Realtors’ midyear conference Thursday to talk about something else he is known for: bipartisanship.

Last week, CQ Roll Call named the conservative Democrat the most bipartisan senator for the third year in a row. Manchin has served in the Senate since 2010. Because Democrats and Republicans are split 50-50 in the Senate, the content of legislation and whether it passes often comes down to what Manchin decides.

West Virginia is one of only six U.S. states where the senators do not belong to the same party, McGahn told attendees. She asked Manchin when and how bipartisanship would make a comeback.

“I don’t think [bipartisanship] has ever left, I really don’t,” Manchin said. “I think what’s harder now is through all of the media, whether it be cable [or] social platforms, it just keeps radicalizing more people.”

People gravitate toward “a comfort zone” that reiterates what they already believe and what they want to hear, Manchin said.

“Now it’s to the point, how do you undo that?” he said. “How do you get people listening to the facts and working together?”

He suggested that congressional leaders should be required to have dinner or lunch or “even one cup of coffee” with members of the opposing party once a week.

“Bipartisanship, it’s who we are as a country,” he said. “It’s this experiment of ours. Benjamin Franklin’s said, ‘You have a republic, young man, if you can keep it.’ And it’s still an experiment 240 years later. So, I’m not giving up on it. There’s a lot of good camaraderie back and forth. There needs to be a lot more.”

Bipartisanship is built through personal relationships and trust, according to Manchin. His comments echoed NAR’s lobbying playbook, which also emphasizes making friends with lawmakers.

“It’s hard to say no to your friend,” Manchin said. “You always want to try to accommodate or find a pathway forward with a friend. If you don’t have a relationship and it’s not your friend, it’s pretty easy for you to walk away, or basically just not be engaging at all. I’ve always said once you get to know each other, you’ll look for a way to make things happen.”

Bipartisanship is not going to work every day trying to get your friends fired, according to Manchin.

“We should never be ethically allowed to campaign against a sitting colleague, whether you like them or not, whether they’re in the same party or not of yours,” he said. “Now if there’s an open seat, then that’s fine. Pick somebody that you like and then support them all you can, but not a person who you want to work with day in and day out.”

Now it’s common knowledge that when a lawmaker is up for election that their “friends” turn against them, according to Manchin.

“Well, why have friends then?” he said. “I refuse to do that. There’s not a Republican that looks to me as not their friend or an adversary that’s trying to get them defeated. They know I don’t do that, nor would I ever do that. That’s how you build bipartisanship.”

When it comes to his own role in the Senate, Manchin insisted he wasn’t trying to be “obstructionist,” but rather was trying to get the chamber to work as he understood the founding fathers intended and according to his own oath of office.

“We don’t expect anything to pass from the House that’s going to be in a moderate bipartisan way,” he said. “It’s not the way it’s designed. And they should understand when it comes to the Senate, we’re going to make adjustments because we have rules that basically intend and force us to do things in a bipartisan way or it won’t get done.

“That’s the way it’s always been. All of a sudden now it’s 100 percent of everything you want or it’s nothing. It’s not who I am. I’m looking for any way we can to move forward to improve. We’re trying to have in our Constitution, a more perfect union. Not a perfect union because we’re never going to achieve a perfect union, but we can make it better every day.”

Some lawmakers get so entrenched in their position that they let the perfect be the enemy of the good, he said. He’s never met a Republican that was always wrong or a Democrat that was always right or vice versa, he added.

“You just got to accept people bringing good ideas to the table,” he said.

He and Capito, the first Republican woman ever elected to both the U.S. House and Senate from West Virginia, spend time together and their extended families have been friends for decades.

“I know that she has West Virginia through and through in her heart and soul,” Manchin said. “And she knows that I do too. We want the best for our state. That really trumps everything. We can set the example of what bipartisanship should be.”

From left: Shannon McGahn and Shelley Moore Capito at Realtors Legislative Meetings, May 2021

Capito, elected in 2014, noted that Republicans and Democrats do work across the aisle a lot to get things done.

“Whether it’s criminal justice reform that we’re working on now, or whether it’s the Great American Outdoors Act that we passed last year or whether it’s appropriations bills, we actually do work a lot more behind the scenes together,” she said.

“The problem is the big issues is where we really have great differences and those are the sharper elbows that you see. It could be better, but I guess my thing is maybe it could be a lot worse. And we need to do something to make it better so the American people can see us working together.”

Both Capito and Manchin described President Joe Biden as someone who can make a deal. Capito is leading the Republican negotiations with Biden on infrastructure and will be meeting with the White House on Thursday.

“The President has been, I think, very welcoming to Republicans to say ‘Okay, if you don’t like my infrastructure package, what do you like? Show me what you like,'” Capito said.

So she and other Republicans put together a $568 billion package (compared to Biden’s $4 trillion proposals) composed of the physical infrastructure — roads, rail, transit, broadband, airports, ports — they believe the legislation should cover.

“I was kind of thinking, well, they might just blow me off and say ‘oh, that’s not enough, you’re not serious,’ but instead it was the opposite,” Capito said. “They said, ‘Okay, good starting point, let’s talk about this.’

“We’re going to go in and I think really put the pen to the paper and say where are our differences, where can we kind of slice it and let the president make a play for other infrastructure if he believes something else needs to be in there.”

She said she’s excited about meeting with the White House.

“I think this might give us a real chance to do what people expect you to do, which is to work together and negotiate a deal,” she said. “So we’ll see what happens on Thursday but we’re serious and I think the president is serious too.”

When partnering with a vendor, who owns the data?