The brokerage’s revenue grew 52 percent annually during the second quarter, reaching $128.2 million, up from $84.2 million, according to an earnings report released Thursday.

ftranFathom Holdings, parent of Fathom Realty, saw its revenues grow substantially during the second quarter of 2022, but its mortgage business struggled amid a high mortgage rate environment.

The holding company saw its revenue grow 52 percent annually during the second quarter, reaching $128.2 million, up from $84.2 million, according to an earnings report released Thursday afternoon.

However, the company logged a GAAP net loss totaling $5.7 million, or a loss of $0.35 per share, according to the report. Fathom attributed the loss to the struggles of its mortgage business, which has been challenged under the weight of increased mortgage rates.

Fathom’s real estate arm, Fathom Realty, completed more than 13,200 real estate transactions during the second quarter, a 32 percent jump from the previous year, and was able to post a profit for the fifth-straight quarter, which executives pointed to as a strong sign for the company.

“Growth in our key metrics this quarter, even with less-than-ideal market conditions, reflects our ability to provide agents with the opportunity to keep significantly more of their hard-earned commission dollars,” Fathom CEO Joshua Harley said in a statement. “We believe that competitive advantage should serve us well over the long-term.”

Fathom saw its agent network grow 38 percent annually, to approximately 9,560 agents during the second quarter — with July making up its best month yet for recruitment, according to Harley.

Harley said during an Aug. 4 call with investors he believes the brokerage stands to benefit from the ongoing market downturn by upping its agent count through the recruitment of brokers attracted to its 100 percent commission structure during the downturn.

“We could see more agents joining our brokerage when those agents begin to see their income affected,” Harley said.

The company attributed that growth in expenses to recent acquisitions and increases in non-cash stock compensation.

Company leadership said its main focus remained achieving EBITDA profitability, which has remained out of reach. Harley said the company has devised a cost cutting structure to achieve it within a number of quarters.

“Our main focus is on achieving total company Adjusted EBITDA profitability. Through a conservative approach to cost management, we are working closely with each of our business heads to reduce expenses by a total of approximately $750,000 per quarter by the first quarter of next year,” Harley said. “While Fathom is not immune to this unprecedented market, and there possibly will be additional challenges to manage through, we strongly believe that the value we provide to our agents, our model and our execution will continue to drive growth into the future.”

Coming in to earnings season, Fathom had expected its numbers to look rosier than the previous quarter. Guidance from its first-quarter earnings report said the company expected revenue to end up somewhere between $110 million and $115 million in the second quarter.

The company also expected to roughly break even in the second quarter according to EBITDA — adjusted earnings before interest, taxes, depreciation and amortization. The company had previously said it expected this measure to come in between a $200,000 loss and a $200,000 profit.

Earlier this year, Fathom was still muddling through multimillion-dollar quarterly losses while projecting they’ll soon reach profitability amid a period of expansion.

The company reported a net loss of $6 million in the first three months of the year, nearly twice what it lost over the same period in 2021.

Fathom’s revenues ballooned over that time as the company grew its agent count. Revenues were up more than 80 percent year over year in the first quarter of 2022.

In 2021, Fathom ranked sixth nationally in sales volume among independent brokerages, with $12.2 billion. Since then, it’s continued to expand its agent count through acquisitions and recruiting. 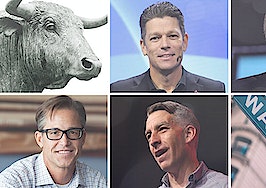