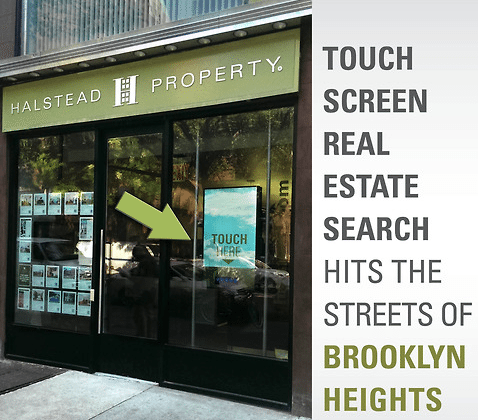 Interactive ads have proliferated on the Internet for a simple reason: You grab more eyeballs online if your ads move around and actively engage people.

Editor’s note: This post explores a marketing tactic submitted by Halstead Property, the most recent winner of #madREskillz, a weekly Inman News Twitter competition. Every Thursday, Inman News invites real estate professionals and companies to tweet offbeat marketing tricks using the tag #madREskillz. After reviewing the submissions (and retweeting many in the process), we select two finalists and put them to a vote on Facebook. Then we feature the winner in a story.

Interactive ads have proliferated on the Internet for a simple reason: You grab more eyeballs online if your ads move around and actively engage people.

Acting on the fact that the same is true in the real world, Halstead Property, winner of the latest #madREskillz competition, is using interactive storefront displays provided by tech company imageSurge to poach leads right off the street.

“Storefronts get hundreds of thousands walking by them on a regular basis,” said Matthew Leone, director of Web marketing and social media at Halstead. “It’s just taking advantage of that.”

With motion graphics and calls to action, the street-side displays invite pedestrians to search online listings at any hour and connect with agents.

They also offer videos and virtual tours with “through-window” audio. And they track analytics, including the number of people who use the display and which properties they view the most. That way, brokers can gauge return on investment and tweak the content featured in the displays.

Leone argues that imageSurge’s displays provide it with a rich marketing boost because they broadcast Halstead’s superior grasp of digital marketing while simultaneously putting its listings in front of more potential buyers.

In New York City, Halstead is the only broker using the technology, and will remain so until an exclusive agreement it signed with imageSurge expires. In a few weeks, close to half of its 20-plus storefront offices, including ones in Connecticut and New Jersey, will have imageSurge displays, Leone said.

The company has yet to compile data that would shed more light on imageSurge’s effectiveness at snagging leads, but Leone said the displays regularly attract people into their offices and connect passersby with agents.

ImageSurge isn’t the only provider of interactive storefront displays, but Halstead settled on the company because, unlike some competitors, imageSurge’s displays are resistant to weather (thanks to infrared touch screens) and don’t tend to smudge, according to Leone.

A rapidly growing number of brokers have followed Halstead’s lead since it signed a deal with imageSurge earlier this year. Nine brokerages in the greater Boston area, and others in New York, Rhode Island, Maryland, Georgia, Florida, Illinois and Colorado all have installed imageSurge displays or signed deals with the company, according to an imageSurge spokesperson.

ImageSurge earned this year’s Inman Innovator Award for “Most Innovative Brokerage or Franchise App, Tool or Vendor” presented in July at the Real Estate Connect conference in San Francisco.

Editor’s note: This story has been updated to note all the areas where brokerages have signed deals with imageSurge. 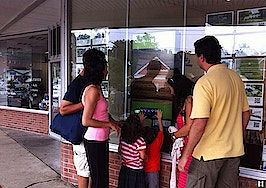 ImageSurge's interactive real estate storefronts gain traction
Back to top
Only 3 days left to register for Inman Connect Las Vegas before prices go up! Don't miss the premier event for real estate pros.Register Now ×
Limited Time Offer: Get 1 year of Inman Select for $199SUBSCRIBE×
Inmanpot
Log in
If you created your account with Google or Facebook
Don't have an account?
Create an Account
Forgot your password?
No Problem