It’s been a little over a month since Nick and Vanessa Lachey (formerly Vanessa Minnillo) listed their Encino mansion for $3.995 million, but the celebrity duo’s home swiftly sold on June 1 at full asking price, according to Redfin. The singer and TV host purchased their 8,314 square foot abode for $2.85 million in 2011, receiving a cool $1.14 million return on a near-$4 million sale for the Los Angeles home after five years of ownership.

Privacy is key for Lachey and Minnillo, so it’s no surprise the property is tucked away on a cul-de-sac and virtually hidden with greenery and gates. Nonetheless, with a formal living and dining room and butler’s pantry, the home is ideal for entertaining large parties.

The Agency declined to provide pictures of the home, but here’s a virtual tour from 2010, right before the couple purchased the home.

The home is located in the South Valley, where 572 real estate sales in the last 90 days had a median list price of $678,900, according to Redfin; sellers in the area received and average 99 percent of asking price and six-and-a-half offers. 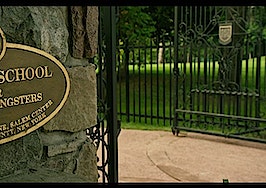 Celebrity listing: the X-Mansion, home of the X-Men