New York broker/owner, Michael Meier, a Snapchat champion, is currently offering $2,000 to real estate agents whom he feels inspired to hire after they have made a successful Snapchat pitch to him.

New York broker/owner, Michael Meier, a Snapchat champion, is currently offering $2,000 to real estate agents whom he feels inspired to hire after they have made a successful Snapchat pitch to him.

In his weekly classes at the New York Real Estate Institute (NYREI), he also has his students do a “snap pitch” on themselves, which gets critiqued in class as part of learning about what social media can do for them. (Every now and again, he’ll throw in a $50 incentive to get them started.)

Meier — who has his own brokerage in New York, Meier Real Estate — is one of the leading users of Snapchat in the real estate industry right now. He believes it is ideal for agents to educate, communicate and compare notes with each other, in addition to giving listings exposure.

“Snapchat is taking over from Twitter,” said Meier, who believes the social channel is definitely “100-percent aging up.”

For those in real estate who argue that the social media platform’s user base is too young to be taken seriously, he asked: “Then why do you see a big Snapchat ad on the back cover of Fortune magazine? I don’t know many 12-year-olds who read Fortune.”

According to a Bloomberg article Meier read recently, users are watching 10 billion videos a day on Snapchat.

As someone who hadn’t really invested in Instagram or Facebook, but had always done video, Meier considers Snapchat a revelation.

“The second I got into Snapchat, it was like the gloves coming off — now I am the real estate Snapchat guy.”

Meier stressed that Snapchat is part of an overall strategy that he uses at Meier Real Estate to make contacts, build relationships and close deals.

“We leverage technology in a variety of ways, and yet still use traditional forms of media.”

His business remains all about relationships, he said.

“Not using Snapchat, or video at all, is like not using the phone when it became commercialized,” he said. “It’s an amazing tool.  You have to learn how to use it — but once you do, you won’t remember life without it,” he added.

Michael Meier: ‘Not using Snapchat, or video at all, is like not using the phone.’

Snapchat shows the real you, warts and all

Meier thinks of his brokerage as having a high-end brand — the company’s average Manhattan property sells between $2 million and $8 million — so he is particular about what he puts in his company’s branding, in its marketing or on the company website.

But, he said cheerfully, with Snapchat, you can’t edit what you are doing; you can’t get your graphic designer in to polish it up.

“Basically, it’s: This is me, this is who I am. If you want to see professional branding and aesthetics, go to the website. But if you want to know who the person behind the brand is, go to their Snapchat profile.”

Meier has a sidekick in his snaps — Shadow, a pitbull, who is very shy.

He added: “With Snapchat, you get to know a person; it’s as close to a human interaction as you can get on social media.”

Meier wants to make it clear that he is active on Snapchat — and it’s only been four months — primarily to educate others in real estate.

The broker’s career in real estate began at Foxtons in 2005, before moving to Douglas Elliman after a year and a half, where he was on a top team. He then set up on his own in 2009 as Michael Meier Real Estate.

He is a big believer in shadowing others’ success.

“My recipe began with me building my business years ago through cold-calling and growing my network to what is now a huge database. Through cold-calling, I became the FSBO (for sale by owner). I had a system in place to make contacts and build relationships with those contacts.

“I enjoy helping agents improve, and Snapchat is a great platform to share these methods.”

Every Monday through Thursday, the broker/owner does a #snapucation session, where he teaches real estate lessons in six “snaps” or less. Typically, these total less than one minute long.

“I ask my viewers to pose questions or topics they would like me to discuss, and I prepare and present a thought-out, organized, bite-sized lesson,” Meier explained. 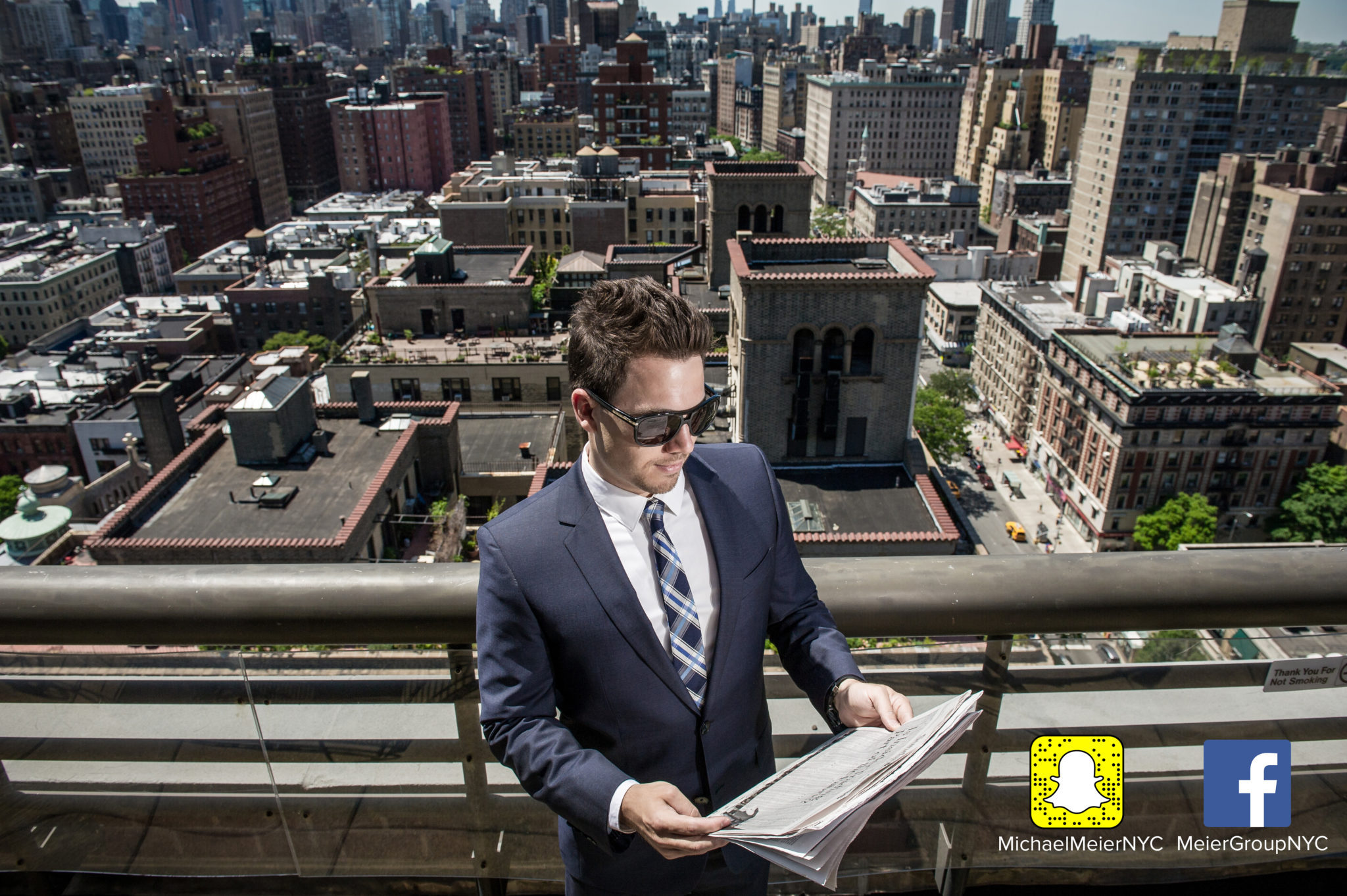 Topics in the past have included: business planning, specializing, negotiating techniques and mirroring.

“The goal is to elevate the bar for real estate in general. I am here to educate everybody,” he added.

Although Meier — who goes by MichaelMeierNYC on Snapchat — presents himself as the expert, what he likes about his Snapchat world is “it’s extraordinarily collaborative; it’s a two-way thing.”

People often send him follow-up snaps with questions on a lesson, which he responds to.

“I try to get as many people involved in the educational chat as possible. It’s very much a two-way conversation and lesson,” he said.

“It’s also quite rewarding for me to know that I’m sharing information that others want to know about. Their feedback and engagement are what encourages me to continue and work.”

Each week, Meier goes to the NYREI real estate school to coach agents on how to use social media to build their reputation and relationships with clients, with a specific focus on video marketing through Snapchat and Facebook Live.

“I ask them questions about their past, their skills, what makes them unique and why they are or will be a great agent.”

He tries to get them to show others what differentiates them from others.

“I then encourage them to craft a short message and share it on Snapchat and focus on that message continuously while they are building their reputation on social media and in their everyday life engagements.”

Meier said his sessions are unusual. Most real estate brokers people go to the school and spend 20 minutes on “why you should want to work at my firm — this is my split,” said Meier.

“I don’t do that. I teach you about how to build yourself up to be a real estate agent, help you get discovered.

“It goes beyond Snapchat — they are learning how to market themselves.”

Meier broadcasts the entire presentation on Facebook Live so that while he is teaching new agents in person, he is also teaching experienced agents tuning in. Transparency is key, he said.

A nice byproduct of being active on Snapchat has been recruiting made easy, Meier has found.

Currently a boutique firm with fewer than 20 real estate agents, Meier Real Estate has a few new agents joining the team soon and is looking to expand to new markets, where clients have second homes — Florida and California, for instance.

Meier — who has participated in the T3 Fellows program, a brokerage accelerator — said his systems are much stronger as a consequence and have put him in a good position to grow.

His presence on Snapchat is helping him with this.

“I think using Snapchat helps future agents know that my firm is innovative and forward-thinking,” he explained.

“I’ve been meeting with people from all around the country — I am in their living rooms, I’ve been meeting their family members. If I wanted to go and open up a brokerage in a new market, there are people I could talk to because I know people there.

“I’m trying to help them and they are trying to help me. I really feel that through this new level of technology and transparency, Snapchat has opened so many new doors.

As part of his recruitment drive, Meier is telling anyone who is looking to get into real estate to create a “snap pitch” of themselves. If he hires them, he will give them $2,000 toward their startup marketing.

“I am happy to hire and invest in as many agents as I can,” he noted. “I see the $2,000 as an investment into the future careers of agents I know will be successful.”

“Our system is multifaceted and proven. As a top producer in my marketplace, I have learned what works and what is just hype. I can double agents’ business easily if they implement our Meier systems.”

The idea has been going for two weeks now, and he’s had a lot of people “snapping” him, a lot of questions, “an extraordinary amount of interaction,” he said.

The broker said he is looking for agents who are collaborative, proactive relationship-builders, and who are willing to use social media to build their reputations.

Another use Meier has found for Snapchat, meanwhile, is in promoting the open house.

There are many benefits of snapping an open house for both the agent and their seller client, he argues.

“It benefits the agent’s reputation, because it shows other sellers and buyers that an agent is proactive. The agent has the opportunity to ‘snap’ the preparation for the open house,” explained Meier.

“It shows that the agent has sales skills, because hopefully the agent will pitch some aspects of the home that make it unique. It will benefit the property, because buyers will have an opportunity to see it again after they have left, and buyers who were not able to attend will be able to see it in the first-person camera view.”

It will stimulate conversation, too, because after the open house, an agent can take a look at who has watched their snaps and ask them questions.

“It is the easiest way to contact people after an open house to gather their thoughts, build relationships with them and address any concerns with regard to the property they may have,” added Meier.

“With the potential to tap into the 10 billion views Snapchat gets a day, it would be crazy for real estate agents not to market their properties on the platform — especially if they have open houses scheduled. You get to choose what elements to highlight and entice potential buyers to want to see more.”

Meier is clearly a believer.

“Agents in my company are renting and selling apartments just using video,” he noted. “Last week we snapped an apartment to a prospective tenant, and they submitted an application sight-unseen.” 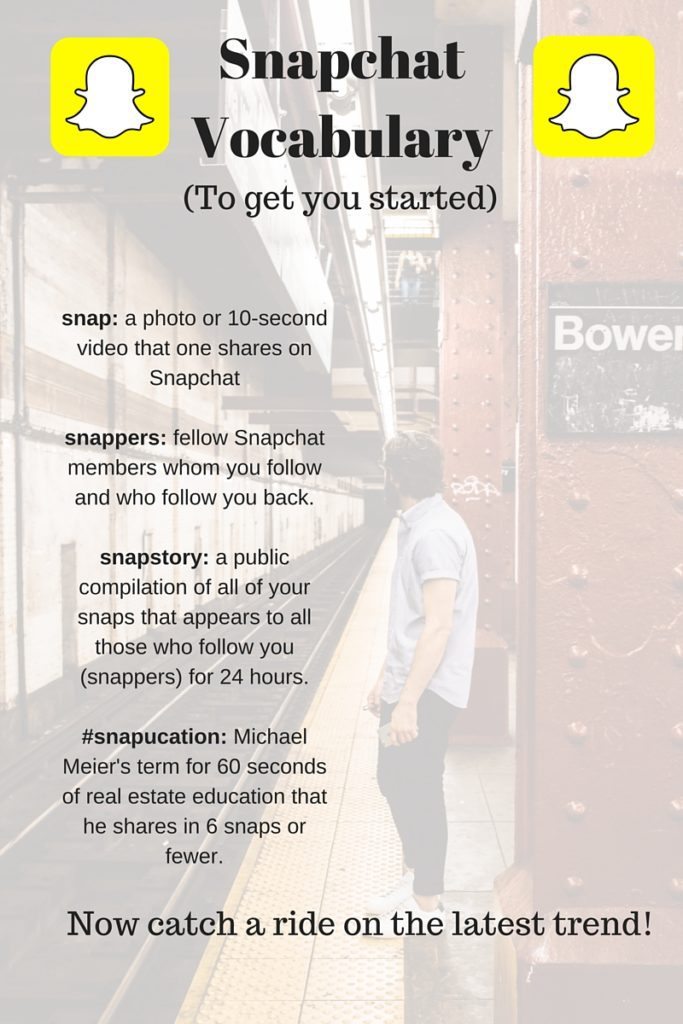 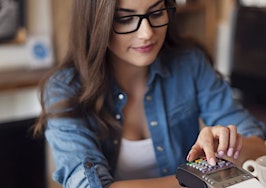 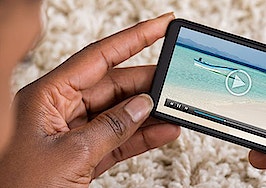 3 reasons to incorporate video into your marketing today 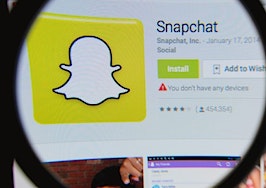 Why using Snapchat for more than marketing is beneficial