Evgeniy Koryakin on Unsplash
by Emma Hinchliffe
Share this article
You successfully shared the article.
Close

In its first seven months of operation in the United States, the U.K.-based flat-fee brokerage Purplebricks posted £2 million, or about $2.6 million, in revenue for £1.3 million, or $1.7 million, in profit after the costs of selling homes, not counting multimillion-dollar operating losses.

Purplebricks, which launched in the United States with the Los Angeles market in September 2017, released its financials on Thursday. For comparison, the company posted revenue of £78.1 million, or about $103 million, for the past year in the United Kingdom, where it’s been operating for four years.

In the United States, Purplebricks incurred losses of £16.5 million, or about $21.8 million, from operating costs and sales and marketing, including an extensive advertising campaign to build awareness of the Purplebricks brand stateside. The fiscal year measured in these reports ended at the end of April 2018.

Purplebricks has expanded its U.S. markets from Los Angeles to other regions in California, the New York metro area, Las Vegas and Phoenix.

In the U.S., the brokerage has homesellers pay a flat fee of $3,600 to list their home instead of paying a commission to a real estate agent. Sellers pay that fee upfront, before a home lists, and don’t get it refunded if the home doesn’t sell.

Purplebricks raised the cost of the listing fee from $3,200 to $3,600 earlier this year. Purplebricks customers in the United States still also pay the buyer’s agent commission in those situations where a buyer’s agent is present.

While Purplebricks has faced speedbumps in its international expansion, including fines over misleading marketing in the United Kingdom and Australia, the company touted the potential of its model for the U.S. market in its report for investors.

Purplebricks expanded to its fourth country, Canada, through the acquisition of the brokerage DuProprio/ComFree announced this week, fueled by $177 million invested by German publisher Axel Springer earlier this year.

“While we have grown quickly, there remains enormous potential for our hybrid agency model to further disrupt the traditional model in both the U.K. and overseas,” Chairman Paul Pindar wrote in his statement.

“As the Group expands into new territories that have higher commission rates than the U.K., we have found that our model is even more compelling and the savings for our customers far greater. We believe that our model presents a significant opportunity in each of our international markets.”

Across all its markets, Purplebricks took in total revenues of £93.7 million, or about $124 million, up 101 percent from the year prior. The company said it now covers a 74 percent market share of the online real estate market in the United Kingdom.

“Whilst we face competition from traditional estate agents, we will make investments that help build upon our success and market share and better exceed the needs and demands of everyone selling, buying and renting in all our markets,” Pindar said in his statement.

“The Company welcomes competition from other well-managed hybrid competitors, which helps to raise the profile and attractiveness of the new model, as well as driving Purplebricks to continuously improve its own service levels to stay ahead.” 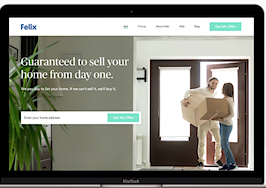 Mortgage rates decline again after steady rise throughout the spring