Overall, the company reported $2.69 billion in revenue for the quarter — a 29 percent increase from the year prior. And it boasted an 11 percent year-over-year increase in revenues to $9.02 billion.

Non-cash write-downs, mainly comprised of $998 million related to Foxtel and Fox Sports Australia and the $165 million related to News America Marketing, as well as the $337 million loss on the transaction referenced above and a $237 million charge resulting from the Tax Act were largely responsible for the company’s net losses.

The total segment EBITDA during Q4 (earnings before interest, taxes, depreciation and amortization) increased 14 percent year-over-year and increased a total of 24 percent during the fiscal year 2018.

Move revenue increased 11 percent to $120 million, up from $108 million a year ago, due to growth in its ConnectionsSM for Buyers product, improvements in yield optimization, and an increase in leads and customers.

Meanwhile, traffic to realtor.com grew 9 percent year-over-year to over 63 million users, more than half of which came from mobile, the company noted. 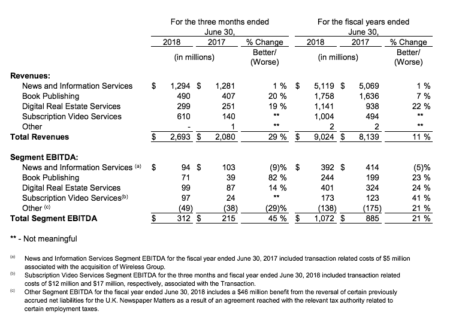 News Corp chief executive Robert Thomson said much of the company’s growth can be attributed to its digital real estate services, book publishing and the consolidation of Foxtel.

“Fiscal 2018 was a year of operational and transformational success at News Corp, with robust performance across our businesses, and positive and profound changes in the character of our revenue flows, which were more global, digital and subscription-based,” Thomson said in a prepared statement released before the call.

“We generated strong revenue and Segment EBITDA growth in the Digital Real Estate Services and Book Publishing segments, which, together with the consolidation of Foxtel, drove over $1 billion in profitability for the year.”

“Digital Real Estate Services continues to flourish, and we expanded into meaningful adjacencies, broadening our audience and our revenue sources,” he added.

In the call, Thomson elaborated on his prepared statement saying there was plenty of room to grow without “alienating realtors by becoming hot to trot house flippers,” a reference to Zillow’s Instant Offers program, which he first slammed in News Corp’s Q3 earnings call in May.

“We remain committed to users of the site who use it to make an important investment for their families, and to realtors, whom we have no intention of usurping, unlike certain other companies.”

Correction: This story has been updated after publication to distinguish between annual and quarterly revenues. We regret the errors. 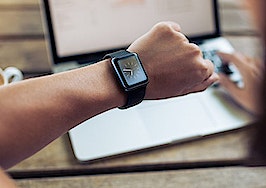 Realtor.com redesigns website to show new home listings down to the hour 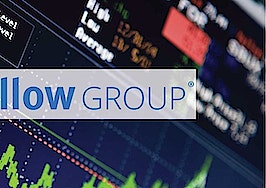 Zillow market cap plummets by $1.6B after mortgage acquisition, earnings 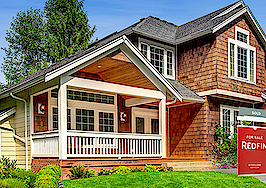