Bay Area residents, property rights advocates and Flintstones fans are rallying in support of a Hillsborough, California, home derided by town officials as a public nuisance for its front-lawn collection of colorful dinosaur sculptures inspired by the 1960s Hanna-Barbera cartoon.

Affectionately called the “Flintstone House,” the purple- and red-domed property has drawn more than 15,000 supporters in an online petition directed at California Gov. Gavin Newsom following a lawsuit filed earlier this month by the town of Hillsborough to remove the sculptures.

“Personally I would fight to keep these statues up and leave these owners alone,” wrote Helen Garcia, author of the Change.org petition. “As a child I would drive to San Francisco with my family to see my grandmother. I would wait patiently until I was able to catch a glimpse at the Flintstones House. At that time it was just orange and round and it intrigued me.”

“As the following Petitioners,” Garcia added, “we stand together saying that we love this set up, paint scheme, statues and all.”

Such a fun night with some of my favorite it people, I have always wanted to check out this funky house! 🎈🐙🦒 . . . #flinstonehouse #privateevent #omvino #sanfrancisco #friends @sommtrose @rachelraeeee

Built in 1976, the home’s undulating architecture, bright orange retaining wall and multi-colored domes have been visible to all from the Doran Memorial Bridge in San Mateo County for decades. But when the home changed hands for $2.8 million in 2017, the new owner, former newspaper publisher Florence Fang, took the iconic Hanna Barbera cartoon connection one step further, decorating the front yard with dinosaur and mushroom sculptures as well as a sign reading Fred Flintstone’s catchphrase, ‘Yaba Dabba Doo!’

After some residents and city officials complained, a code enforcement panel ordered Fang, an octogenarian, to remove the statues and pay a $200 penalty for creating a ‘highly visible eyesore’ back in 2018.

When Fang fought back and continued adding sculptures, the city of Hillsborough filed an official lawsuit to get a judge to order the sculptures removed. The lawsuit, filed earlier this month, does not require Fang to change the colors of the home, which was painted sometime in the 1980s.

“It is one thing to spot this house when driving by on the freeway; you might find it amusing,” Mark Hudak, a lawyer for the town of Hillsborough, told The New York Times earlier this month. “It is a different thing to be a neighbor and see it all day, every day.”

But it didn’t take long for residents both near and far to speak up for Fang’s decorating choices. By March 28, over 15,000 Flintstone lovers had signed the petition demanding Fang and the animals be left alone. The town of Hillsborough, meanwhile, only has around 11,000 residents.

The “Flintstone House Stays!” petition is directed at California Governor Gavin Newsom as well as the Natural History Museum of London, which has a large dinosaur and fossil collection.

To many, the house is synonymous with  childhood memories as well as a mood-lifting view on their drive through the nearby I-280 highway.

“Removing the statues would devastate [my daughter] and many of our childhood memories we have of this beautiful home,” wrote Garcia. “In a land of forest green there is a home where in our childhood imagination, Fred and Wilma greet each other and say, I’m Home.”

Silicon Valley and the greater Bay Area is losing character more and more as our iconic architecture is dozed to provide housing for all the tech people who move to the area. The town of Hillsbourough has it out for this house, as neighbors have never particularly cared for it. The rest of the Bay Area loves it! Hillsborough has decided to sue homeowner Florence Fang. Sign the petition to send the right message to Hillsborough— lay off of the Flinstone House! Link to the #changeorg #petition in my profile! #flinstones #flinstonehouse #hillsborough #iconicarchitecture #architecture #savethishouse #savethisoldhouse #bayarea

Others argued that the fight against the giraffe and mammoth statues represent a wider problem — that of the city telling homeowners what they can and cannot do on their property.

“Homeowners pay property taxes and should be allowed to decorate their home and yard however they please,” Sacramento resident Damiana Wilson wrote under the petition.

Fang, too, has been unfazed by the lawsuit, repeatedly telling media outlets she intends to keep fighting to protect the property.

“All your supportive comments… made me realize that I am not the only one fighting for the legendary Flintstones,” Fang said in a statement to Curbed before the lawsuit was filed. “It is truly an American memory that makes people smile and feel good about themselves. Let’s keep Fred and the Dino alive and work together to keep on smiling.” 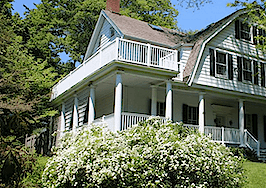 Historic home doubles as a money-making set for TV shows 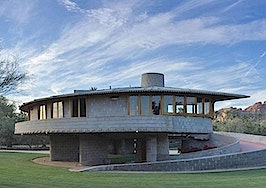 Don't buy these beloved architectural icons now up for sale Hide out from the world in this real-life hobbit house