The latest jobs report is good; most other factors are stable. The economic wild card is the uncertain prospects for the outcome of the trade talks with China.

Interest rates are unchanged again this week. For that matter, long-term rates have not moved for almost two months, the all-defining 10-year T-note within a short snowball throw of 1.80 percent ever since October 15, 30-fixed mortgages near 4.00 percent.

That’s the back-look. But out here on the streets we’re concerned about the next corner. What will we find? Black ice? A pack of kids loaded with slushballs? The next move in rates, whether market- or Fed-driven will depend on the economy, accelerating or decelerating.

All data this week were on the shaky side except one. Abe Lincoln once polled his cabinet, all seven saying nay, then raised his right hand and declared “The ayes have it!” The story is a fable, but perfect for today. No matter how weak all other reports, today’s employment data put the Fed at dead center, no action likely.

The employment report is wild, 266,000 new jobs in November, including return of GM strikers but in addition a 41,000-job upward revision to prior months. Neither markets, nor the Fed, nor I believe the outsize number, and certainly not as an inflation risk (wages are still stagnant,) but a report like that intercepts any thought of a Fed easing more.

The other data were not bad, but not accelerating. The best flash reports of the immediately prior month are the twin ISMs — the end-of-month polling of purchasing managers reported in the first business days of each month. The manufacturing one for November fell from 48.3 to 48.1, below the survey level for growth at 50, but manufacturing is a small component of the U.S. economy. The four-times-larger service-sector ISM arrived at 53.9, down from 54.7 in October. Those low ISMs are incompatible with the reported payroll gain, and history says to trust the ISMs.

Stocks are especially sensitive, but rates also lurch with each petal. The one sure thing, looking back to the August 1st tariff spasm: Trade war is not doing as much damage here or anywhere as feared. That fear got the Fed to ease three times and mortgages to 3.50 percent, but severe damage has not materialized.

In the long run inflation is the issue. I spoke to a group of CPAs yesterday, revisiting Fed policy and inflation back to the 1950s. Their questions were so good that I was still trying to think of answers all evening yesterday.

Staring at long-term charts, back to WW II it is clear that inflation was buoyant, and hence Fed Enemy Number One. In theory, left unattended by the Fed, inflation would rise, and it did, by 1980 spectacularly so. Hence a deep culture at the Fed: eternal vigilance, the assumption inflation was rising even when it wasn’t, and on supposition or fact throw several million Americans out of work in order to suppress the threat.

Prices ran out of control from 1965 to 1980 partly because of overwhelming force, first the “guns and butter” of Vietnam, and then the two upward explosions in oil prices. The Fed could not cause — dared not cause — recessions deep enough to offset price pressure until the public grew weary of inflation and supported Paul Volcker’s brutal stop between 1980-‘82.

But there is more to that inflation-buoyant era. The U.S. economy had little global competition, nothing to prevent oil-price “shocks” from moving into a U.S. wage-price spiral. The U.S. economy was inflexible, especially in energy. It took a decade for conservation to take hold through replacement with more efficient autos, appliances of all kinds, and building standards — and just as long to bring on new supply of oil. The shocks of the 1970s have had lasting effect: The global economy is far less sensitive to oil.

We did not know it at the time, but the era of buoyant inflation for any reason had concluded by the 1990s. Many at the Fed insist on buoyance to this day, but each of the last three chairpersons grew suspicious of the ever-rising inflation predicted in well-intended back-look models.

Why the 1990s? The Iron Curtain came down, liberating for business all of eastern Europe. China opened for business, for itself and a lot of nearby Asia. Shortly thereafter, two concurrent and self-reinforcing booms played out: technology and global trade. The revolution in Silicon Valley facilitated trade, so much easier to discover prices, and to find business partners as seller or buyer.

Trade is the greatest wealth-creator known to humankind, but also tends to level wages and prices. Information technology may be the greatest disruptor of business (after war, and protectionism, the black side of trade), enabling and even forcing reinvention of every business transaction toward cheaper.

Trade and IT have not merely leveled prices and wages, bringing regions into mutual conformity, but pushed down on both. Trade encourages specialization, a boost to quality and cut in cost. IT makes it impossible to raise prices except in concerted reaction to a global event, and absurdly easy for new competitors to undercut existing markets and supply chains.

The Fed has been stuck in back-look. For the best of all reasons: These are economists who depend on math and models, and they say that inflation is (was) buoyant — effervescent unless they “normalize” rates. That line of thinking nearly caused a recession one year ago.

Inflation today is a sinker. A lead-weight doohickey chained around the neck of every economy. Without energetic stimulus from central banks, since the late 1990s inflation will go down to the edge of deflation and beyond, and take economies with it. Every major-nation central bank has printed money for a decade to raise inflation to 2 percent target and failed. Japan has been trying for three decades.

I do not know how long this pattern will persist, but the Fed seems to have learned the lesson for the time being. The odds of low rates and lower are far better than any need for another “normalizing” escapade.

The 10-year T-note in the past three years. It will take something big to knock it out of the steady pattern of the last two months: 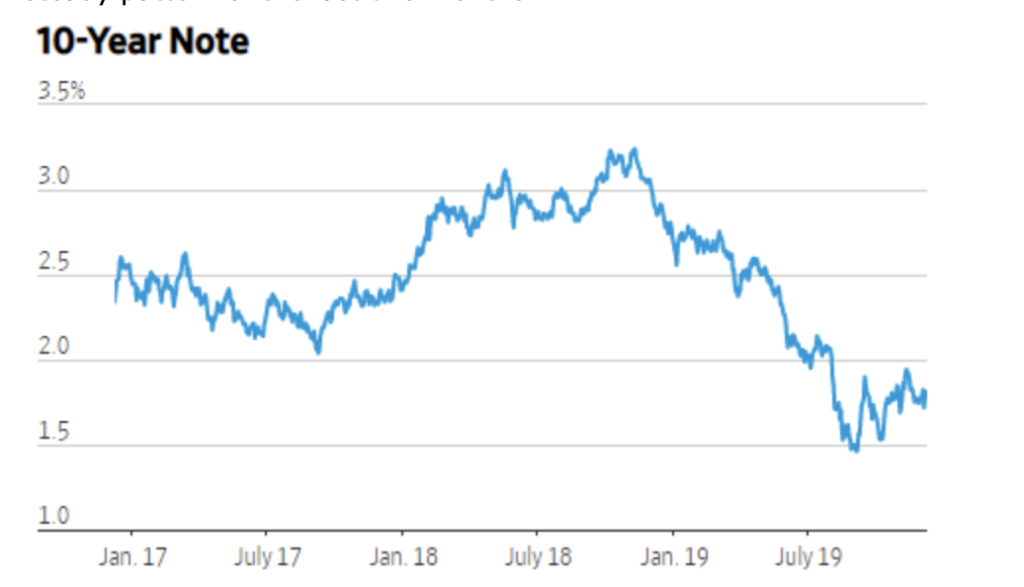 All of the foregoing on low inflation … ahem. The Atlanta Fed GDP tracker has found sudden strength: 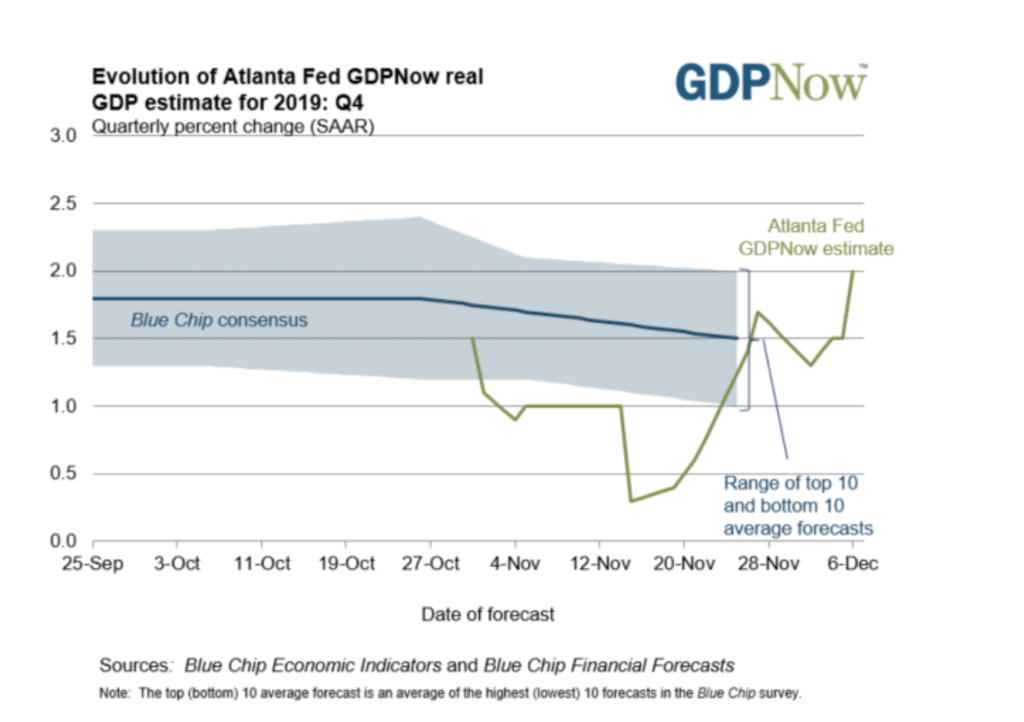 …And the ECRI sees the same rebound. No matter how controlled inflation may seem, if the Fed sees an accelerating economy it will not be able to stop itself from rate hikes to prevent inflation, even if a historical fantasy: 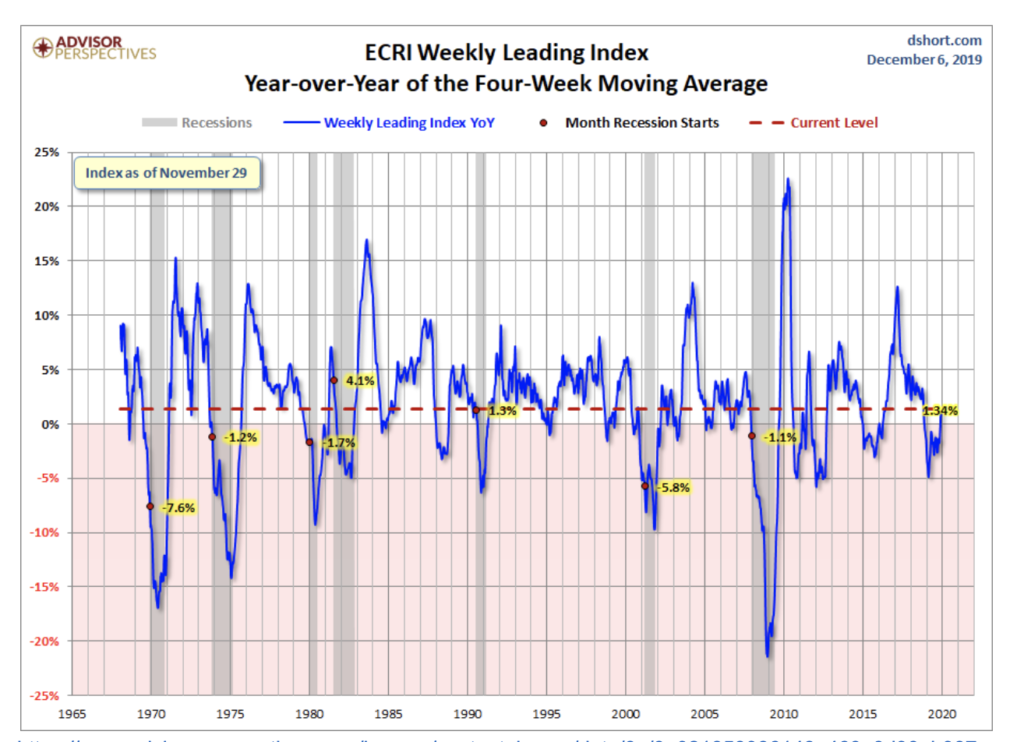