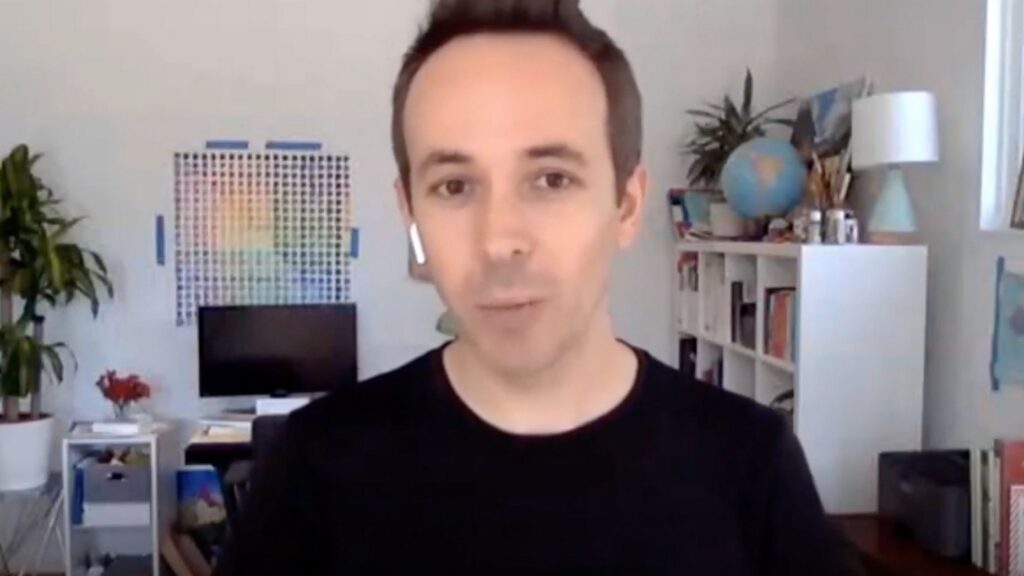 After a dismal March and April, real estate professionals across the country reported a rush of seller and buyer demand in May as cities and states lifted shelter-in-place orders. Although that’s certainly a piece of welcome news, real estate tech strategist Mike DelPrete warned the Connect Now crowd on Thursday not to be lured into the idea that we’ve gone back to normal.

“I was looking around the other day, and I saw this quote from a New York real estate brokerage saying ‘Real estate is bouncing back strong right now and we’re thriving in this environment,'” DelPrete said. “It stood out to me and I’m including it here because I don’t know if I would use the [phrase] ‘bouncing back strong and thriving.'”

“If this is thriving or if this is bouncing back strong, I’d hate to know what challenging or a disaster looks like,” he added. “So, let’s not get ahead of our skis.”

DelPrete said the surge in new listings and pending sales, which he called “high-intent indicators” for seller and buyer activity, is simply pent-up demand from March and April finally being released.

“The image I have in my mind is a river that’s been dammed,” he said. “If you have a river with a steady flow of water, which are real estate transactions, if you dam it, which is what the pandemic did and the associated lockdowns, that flow stops.”

“That dam builds up all this water for one to two months, and now the dam has been released and there’s a flood of all that backed up water which is pent-up demand,” he added. “We’re not just getting back to normal, we’re dealing with that pent-up demand sitting there behind the dam for the past two months.”

DelPrete said he’s been tracking new listings and pending sales domestically and internationally, and every market experienced a dramatic drop in listing volume, transactions, and pending sales in March, which is when COVID-19 transformed from an epidemic to a pandemic.

“[My data] starts from when they saw their first decline,” he said. “So some cities were affected early and some a little bit later, but you see the same general trend and the same general flow.”

According to his data, DelPrete said March and April international new listings took a 70 to 90 percent year-over-year dive in the United Kingdom and Italy. Sweden, the Netherlands, and Germany also experienced annual declines, but stayed relatively steady, he added. Finally, in the United States, new listings dropped 40 percent from 2019. 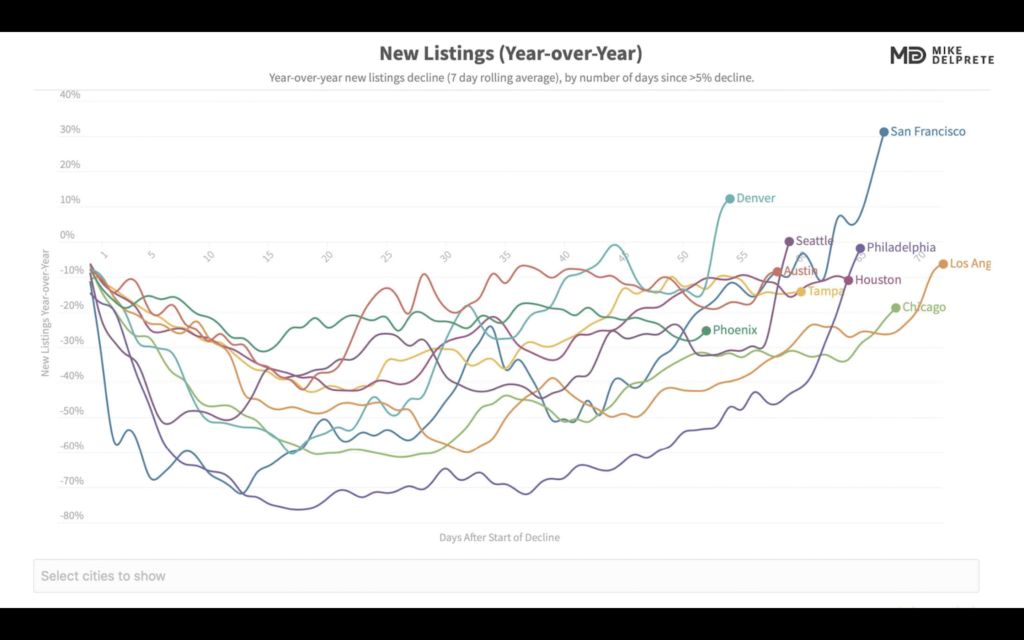 “Looking at it at a week-to-week basis doesn’t provide a complete picture of the market,” he told professionals who are searching for signs of a quick recovery. “Look for as many data points as you can. Look at from a week to week basis, but also look at it from last year.”

“The point is that supply and demand are changing on a daily, weekly, and monthly basis,” he continued. “It’s different in every market, and if you see national numbers, it just doesn’t matter.” 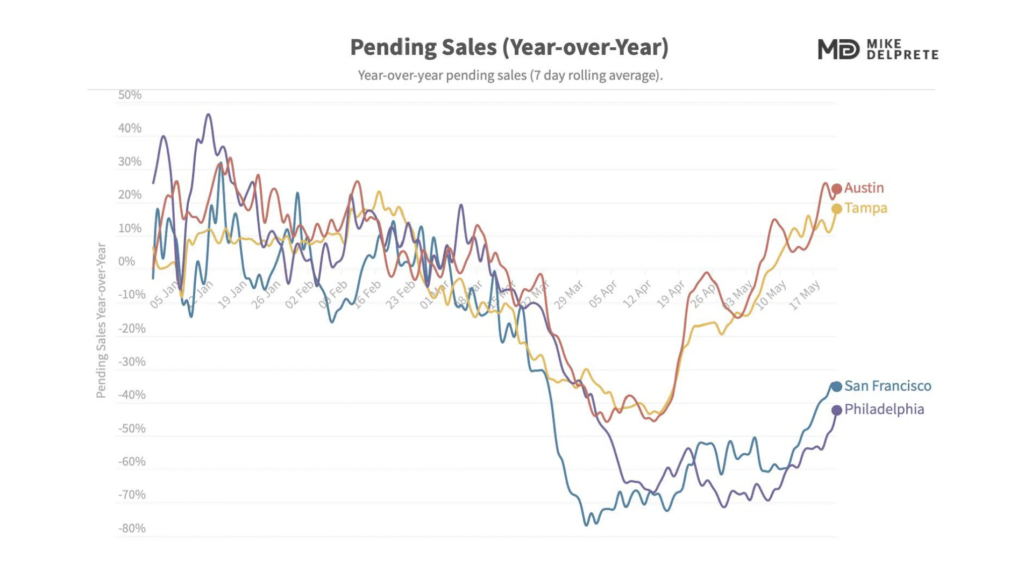 Meanwhile, New York City and the greater Seattle area’s new listings and pending sales are down as much as 90 percent — a reflection of the toll COVID-19 has had on those communities.

“New listings as of two weeks ago are still down 40 percent,” he said of Seattle. “It’s where the pandemic first took hold in the U.S. and you can see quite a significant drop. In 2020 new listings plummeted down and have been down.”

“New York City is probably the hardest hit market in the U.S.,” he added. “Listing volumes are down 76 percent. At worst is 80 to 90 percent.”

Meanwhile, markets in the center of the United States, namely Texas, stayed relatively steady throughout March and April as evidenced by Houston and Austin’s 10 to 20 percent year-over-year pending sales gains. 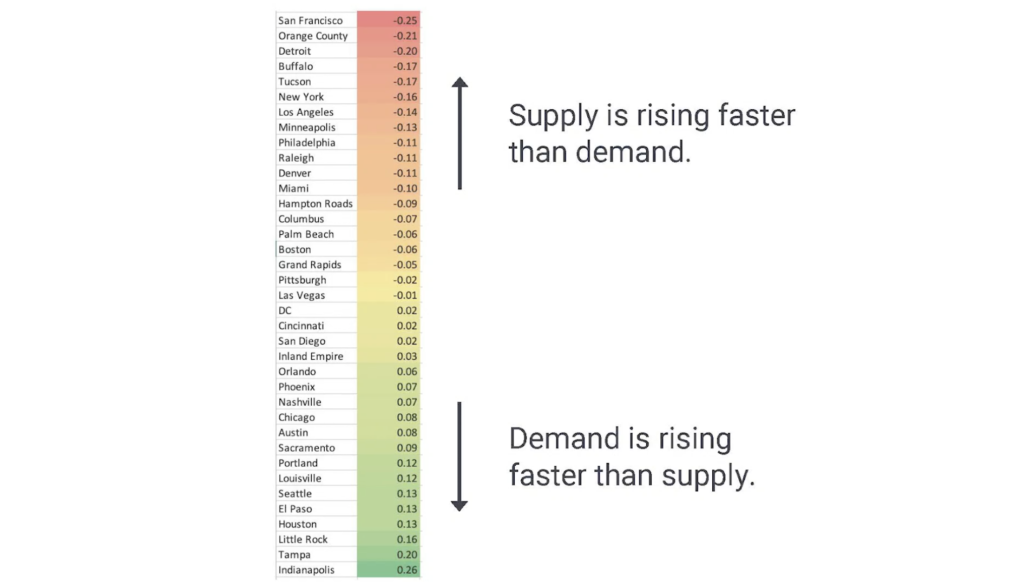 Seattle and Austin have more demand than supply, and San Francisco and New York City have more supply than demand, he noted. But on a national level, new listings and pending sales are beginning to recover in most markets, despite being down anywhere from 10 to 40 percent year-over-year.

Even with impressive week-over-week gains, such as 70 to 80 percent new listing volume surge in Philadelphia after the lockdown ended, DelPrete urged agents to temper their excitement. 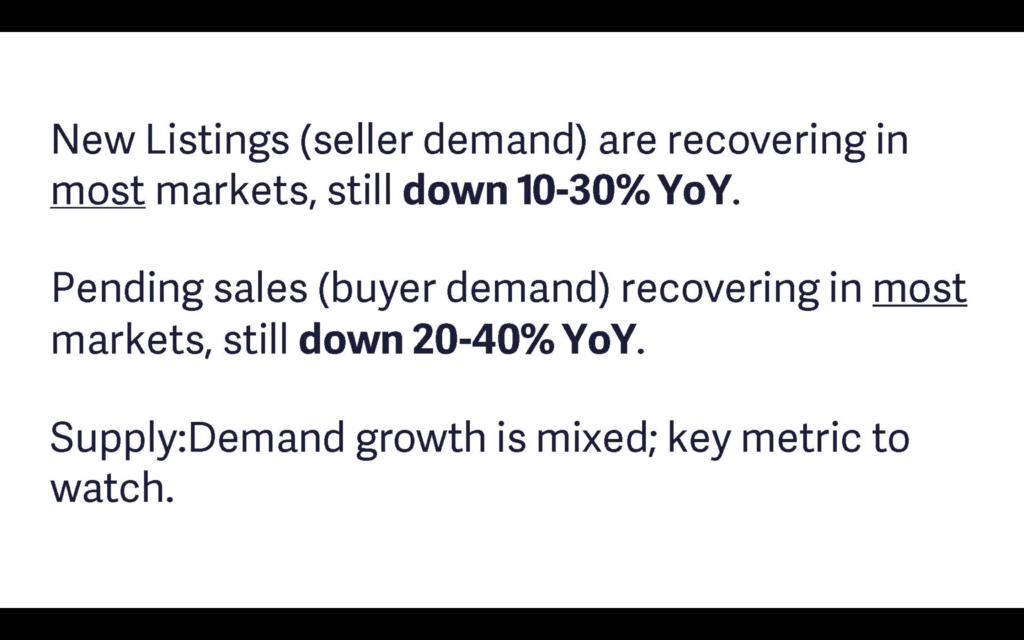 “The surge is just that, it’s a surge,” he said. “That surge of water is temporary. It’s not the new level there. I think it would be reasonable to expect that we’re not going to maintain those levels.”

Looking forward, DelPrete said iBuyers and traditional real estate brokerages will need to push the pedal to the metal if they want to stay relevant and capture market share. For iBuyers, DelPrete said they must reach profitability and prove their business model to consumers.

“The key for them is relevancy,” he said. “They need to prove their model can work not just from a health and safety standpoint, but from a business model standpoint. They have to get back to the market.”

“Buyer business model is unprofitable,” he added. I’m not talking on a unit economic basis or in certain markets, if you strip all of your expenses you can be profitable. But at a high level, is it a profitable business model? Can we get there?”

He continued in reference to Zillow and Opendoor, “The path to profitability is dependent on mortgage and title, and it’s the battleground.”

For traditional brokerages, DelPrete advised them to “move fast” on developing and releasing dynamic virtual tour options, to double down on hiring and marketing, and focus on creating digital transaction platforms to meet consumer demand for e-notaries and e-closings. 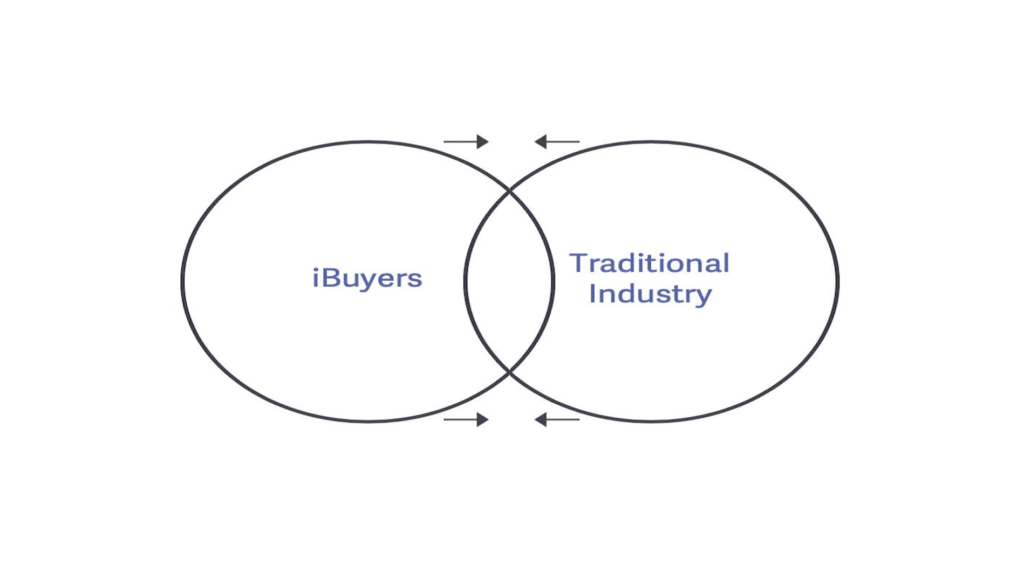 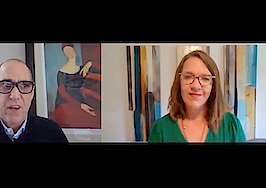 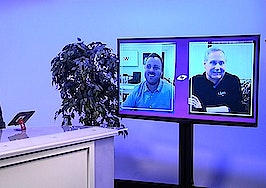 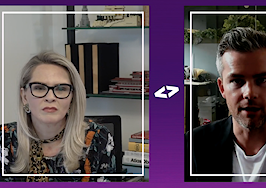 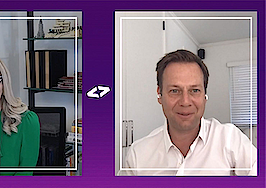