Looking for a little clarity on this week’s news? Windermere Chief Economist Matthew Gardner looks at the factors that influence millennials’ ability and will to buy a home.

Those of you who watched last week’s video will remember that we took on the subject of housing affordability and that to solve what I believe to be a very serious problem, we need to build a lot more new houses and specifically homes for our nation’s first-time buyers.

This week, we are going to take a deeper dive into the world of these first-time buyers, a vast majority of whom are millennials.

Why is providing housing to millennials so important?

Let’s start with taking a look at some numbers. 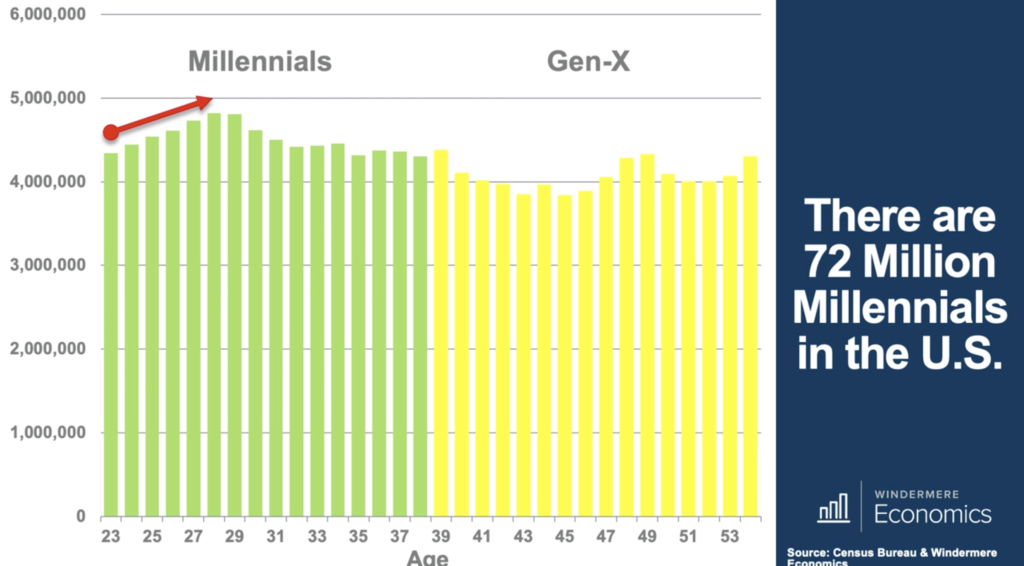 Here is a breakdown of the U.S. population by age for two generational cohorts: millennials and Gen Xers.

In total, there are a little more than 72 million millennials in the U.S., and they are the largest generational cohort, dwarfing the 65 million Gen Xers and outnumbering baby boomers, too.

As you can see, we are set to see a wave of millennials enter their 30s, a time when many will start to think about marriage and families and thus a move out of their current accommodations and into homeownership.

So far, millennials have been holding back from these traditional norms for quite some time, and that raises one big question: Why?

Why are millennials delaying homeownership?

To answer that, we have to understand how different millennials are from other generations. 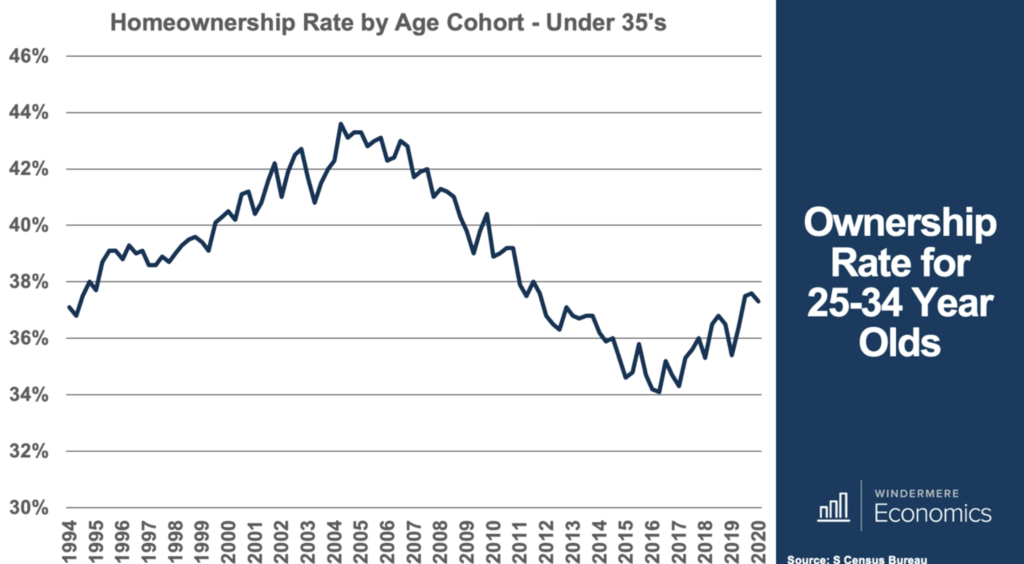 Let’s start by looking at the homeownership rate for these younger Americans. When the housing bubble burst, it hit younger homeowners hard, but in 2006 the oldest millennial was only 25, so the contraction wasn’t from them.

If you’re wondering where all these people were and are living — they are back at home.

So, the question then becomes: Will millennials will move out of their parents’ homes and buy their own, or won’t they?

There are diverging opinions about this, too.

Some would argue that millennials have a lower desire to become homeowners, and they cite two reasons: 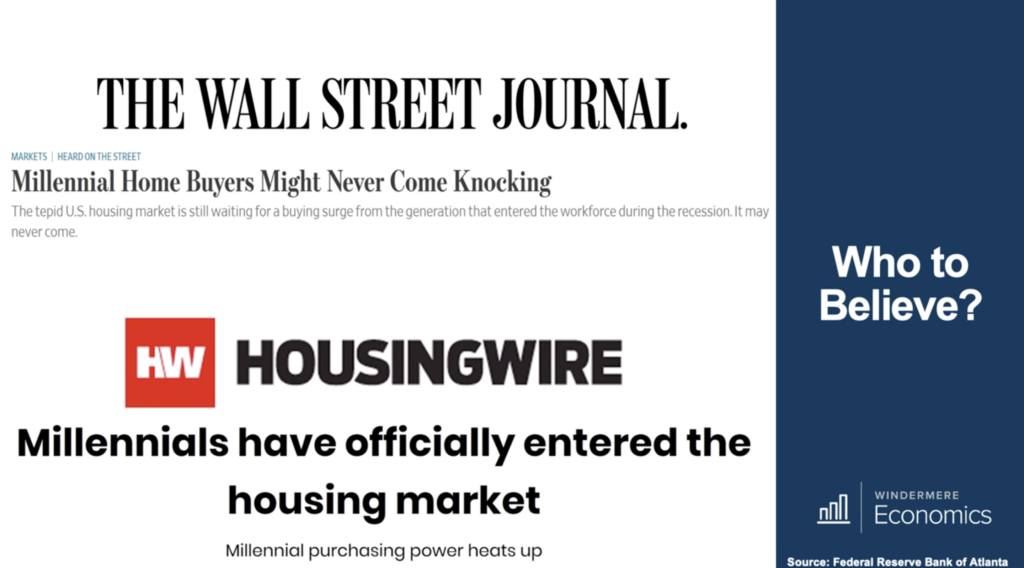 But others like myself believe that with millennials, it’s diversity that’s holding them back. They tend to marry later in life than prior generations — and marriage and children are both critical lifestyle triggers when it comes to buying a first home. But it’s not as simple as that.

I believe that, like their predecessors, a majority of millennials really do view homeownership as an important life goal. In fact, a 2019 survey of 10,000 millennial renters, showed a full 88 percent of them believing that homeownership is still part of the American dream, but millennials do trail their generational predecessors in the pursuit of homeownership.

Will they be buyers or not?

I pulled some data from a survey that was undertaken by Apartment List last year, and it contained some fascinating insights.

You see, when asked about homebuying, millennials reaffirmed my opinion, rather than those who think that millennials are, and will remain, “perma-renters.” The lifestyle benefits of renting are dwarfed by the burden of affordability. 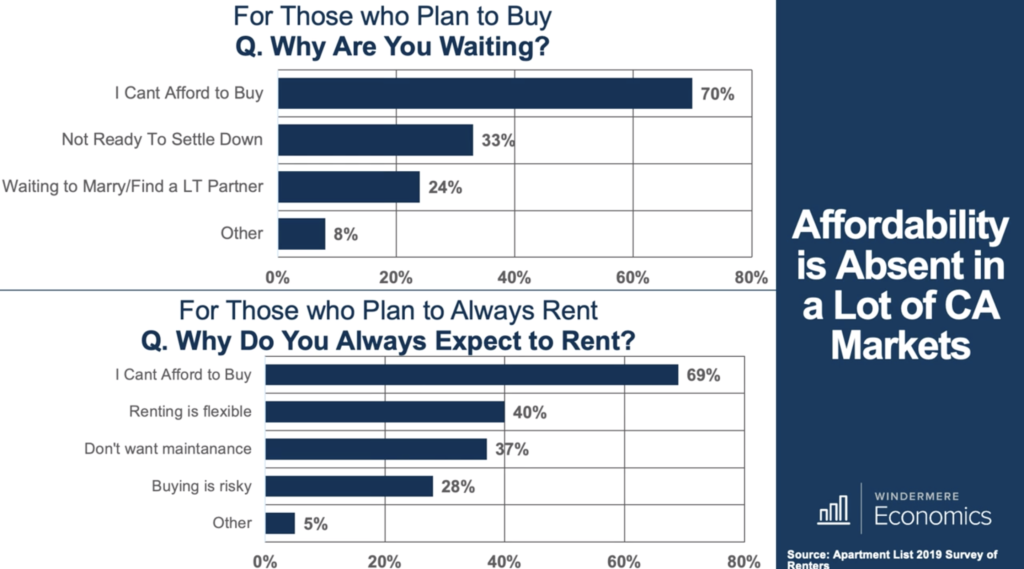 Among millennial renters who plan to buy a home, 70 percent are holding off because they can’t afford to buy, and that’s compared to just 33 percent who say they are not ready to settle into a more permanent lifestyle.

Similarly, among renters who don’t ever plan to buy, 69 percent say they will always rent because they cannot afford to buy, compared to just 40 percent who cite the benefits of a more flexible lifestyle.

So, my take is that while the lifestyle benefits of renting do play a role in their decision-making process, millennials are renting longer because they have to, rather than because they want to.

And with finances being a deciding factor, it was also interesting to see how they were coming along with saving for a down payment and, as this shows, they’re not doing very well. 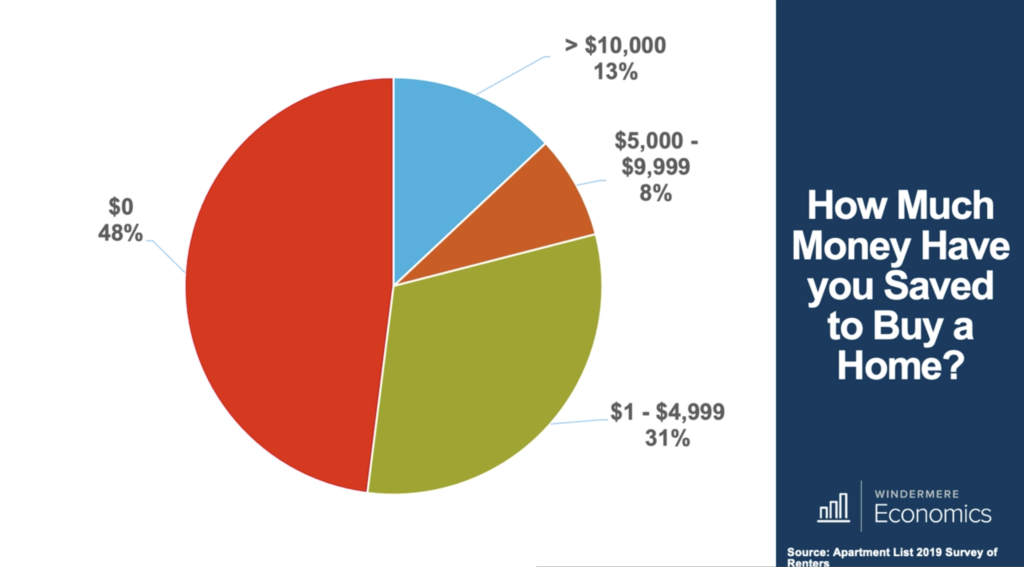 What stood out to me was that almost half had nothing at all saved, and only 13 percent had more than $10,000 saved up for a down payment.

But as stark as this sounds, it’s actually not surprising. Many renters, especially in larger metro areas, have seen their rents rise precipitously over the past several years, and they are stuck. They can either pay the rent or add to savings — many can’t do both — and this is holding a lot of them back. 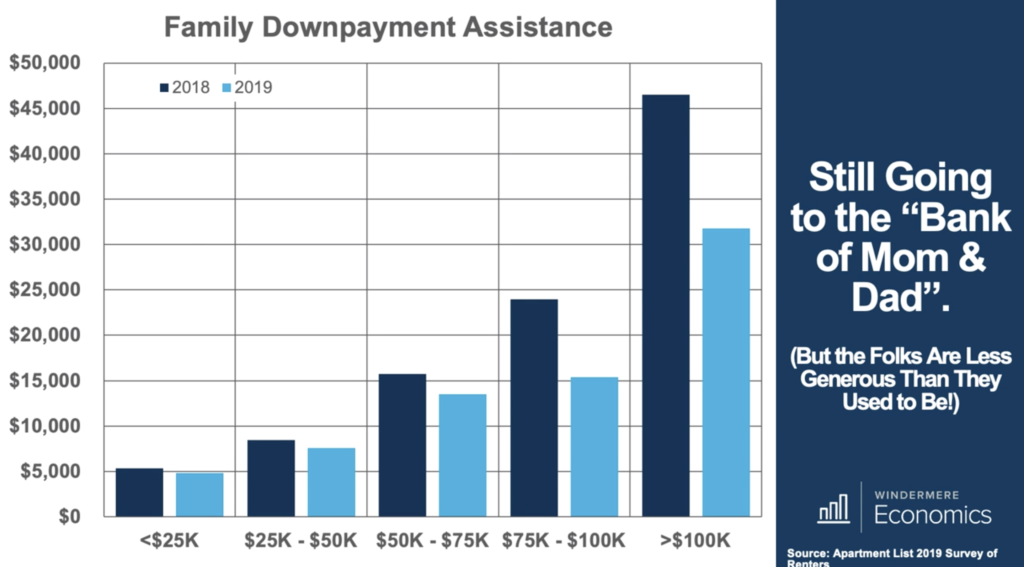 So, what are they doing to get onto the housing ladder? Welcome to the bank of mom and dad. But even those who looked to the family for help last year didn’t get as large a check as those who asked the year before.

And this is a massive problem. Millennials face a housing market where rents and home prices are growing much faster than incomes for decades, and this is leaving millennials struggling to achieve homeownership.

Even college-educated millennials who tend to have higher incomes are struggling to save for a home due, in no small part, to the increasing burden of student loan debt.

So we know why homeownership rates have declined among young adults, but this also raises the question of possible long-term economic consequences for the millennial generation.

The decision to delay forming households and become homeowners will have an impact on their ability to build future wealth.

As millennial families get older, they will have fewer financial resources available to access after retirement, and that can potentially weaken their economic stability.

Wealth created through homeownership is normally transferred from parents to children. But if there is a significant delay in buying that first home, there will likely be less to pass on to the next generation, and that can simply reinforce the wealth inequality issues that we already face, which is another issue.

Ultimately, it’s my sincere belief that homeownership remains very beneficial for most families, offering both financial gains and a chance to build wealth over time, and I believe that this is not lost on millennials.

But don’t think that they are not buying — because they are. First-time homebuyers started out 2020 strong with the purchase of 456,000 single-family homes. That’s up 14 percent from a year ago, and they certainly benefited from improved housing affordability as mortgage rates dropped.

COVID-19 hit housing in April, and first-time buyer activity dropped by almost 30 percent in just one month. However, we also saw a quick rebound in May of almost the same magnitude.

Repeat buyers were more impacted by COVID-19 in April than first-time buyers, in part because their purchases often are contingent on completing sales of their current homes — a hurdle not faced by first-time buyers.

Ultimately, I believe that most millennials want to — and will — buy homes. They do have issues, but believe me when I tell you that they are going to be a significant component of the U.S. housing market for many years to come and would be even bigger if we were to build more housing at price points that they can afford.

Time never stops, and millennials will get older. I’ve already got my eye on the next generation of homebuyers, Gen Z, who are currently in elementary school, but some are old enough to be in college.

There are 67 million of them, and they have already distinguished themselves in several ways:

Of course, what remains to be seen is how Gen Z will interact with the housing market as it comes of age. But we’ll keep an eye on their development.