Let’s talk about a somewhat little-known Fannie Mae survey that’s followed closely by people like myself and doesn’t get enough attention, at least in my opinion.

It’s the National Housing Survey, and this survey was started in 2010 to generate new timely information regarding consumers attitudes, intentions and their financial conditions as it relates to housing. I particularly like it because it’s the only significant national, monthly survey of consumers that focuses primarily on housing.

And it’s particularly valuable to me because, generally speaking, traditional economic data looks backward, but surveys are different. They can show how consumers are reacting to changes in economic conditions that are happening right now, and the data can also give me great insights as to what they are thinking about the future as well.

So, every month Fannie collates the answers of 1,000 consumers across the country to 100 survey questions.

Let’s talk specifically about the responses to six of the questions that are part of the survey. These six questions are collated into an index called the Home Purchase Sentiment Index. 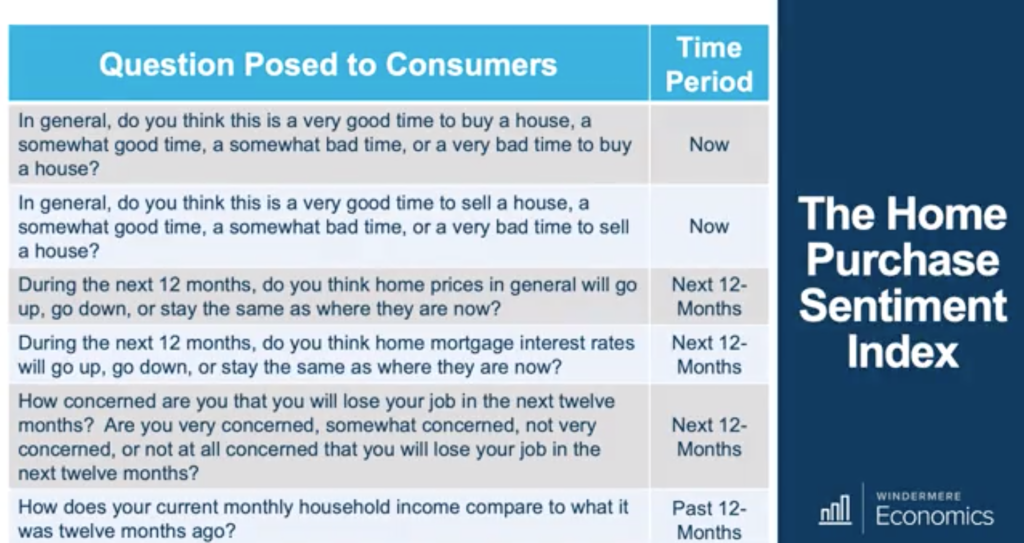 And the survey is constructed from consumers’ answers to these six questions. The first two look at whether it’s a good or bad time to buy or to sell a house; the second two look at what direction they expect home prices and mortgage interest rates to take; and the final two look at how concerned they are about losing their jobs and whether their incomes are higher now than they were a year ago.

So, let’s take a look at the most recent survey results. 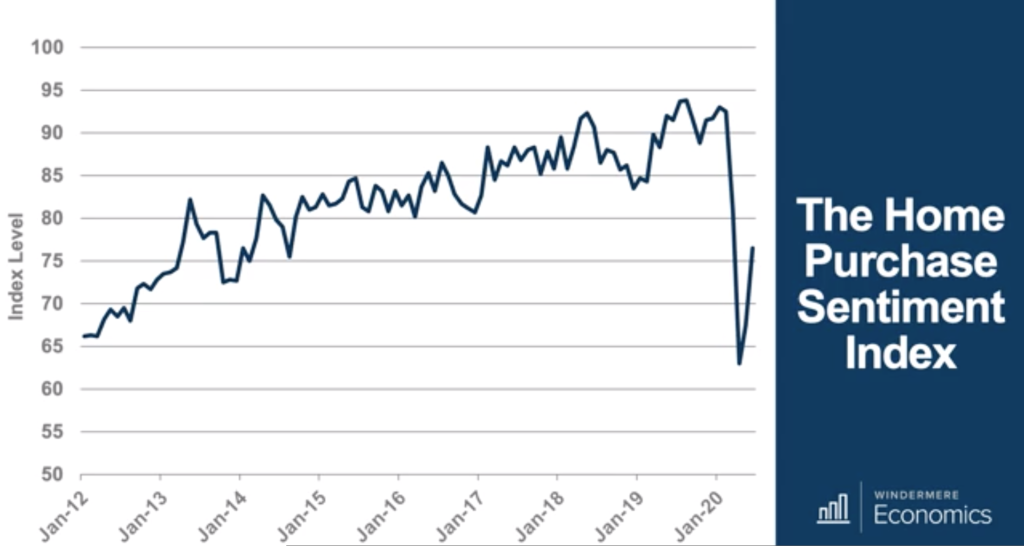 This shows the aggregate index level over time, and there’s really nothing too exciting here, with a few anomalies, the trend has been positive over the past eight-plus years, or it was until COVID-19 hit. Now, given the massive drop that COVID-19 created, I thought that it would be more interesting to look at recent moves in the index rather than looking at the longer-term trend.

The index was plodding along rather nicely through February, but when the pandemic really hit in March, it dropped significantly and got even worse in April with the overall index at a level not seen since the end of 2011. 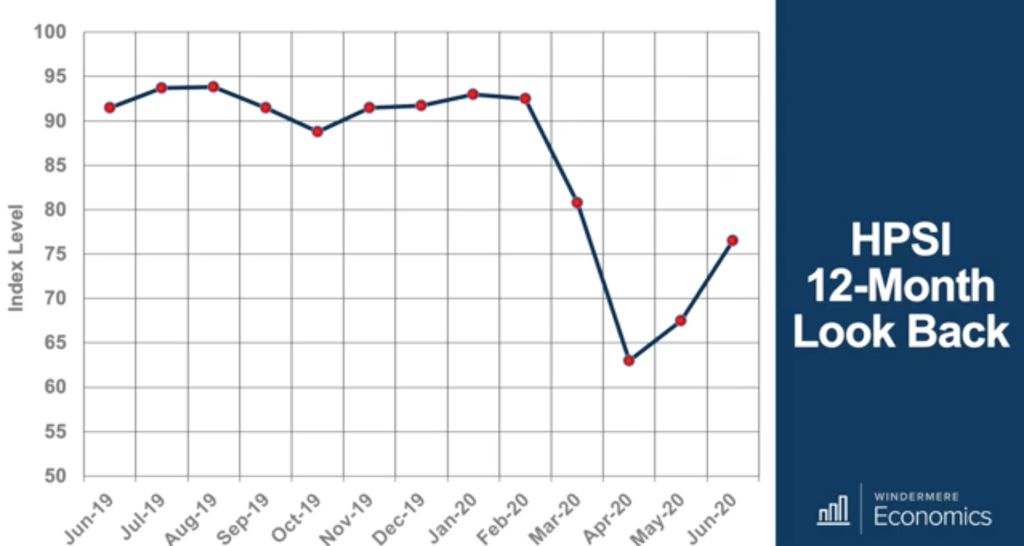 But it turned around remarkably rapidly with a decent improvement in May and an even greater increase in June. Of course, the level is still down by 15 points when compared to a year ago, but the snap back is certainly impressive.

What led to this very quick turnaround? 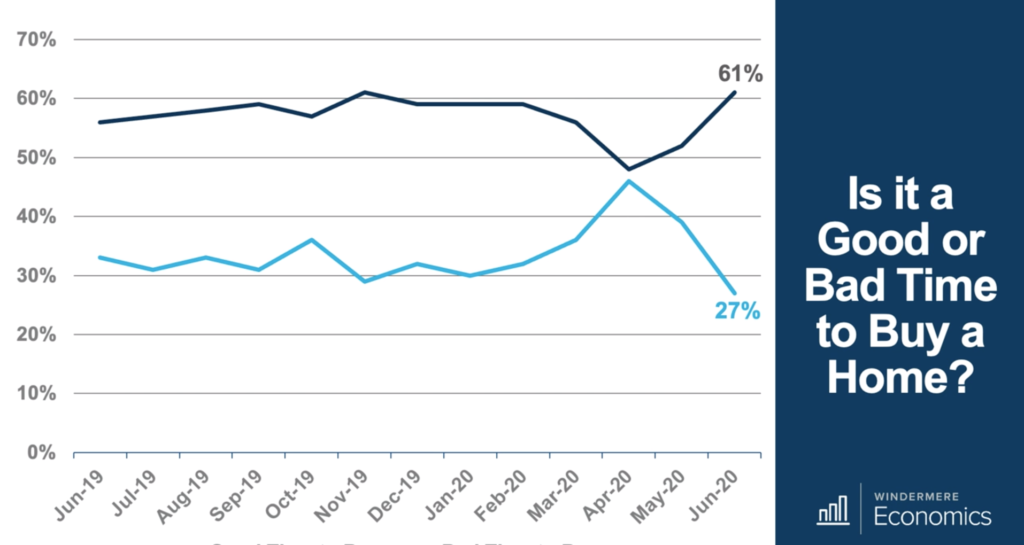 Now, I did want to mention that there is another question in the broader survey that asks renters if they would buy or rent again if they were going to move.

A full 69 percent said that they would buy — that was the highest share in over five years, and it supports my belief that demand from renters (remember the millennials I talked about a few weeks ago?) will be a force in the ownership market going forward. (But I digress.)

When it comes to whether it’s a good time to sell a home or not, things look a bit different. In as much as the share of people who thought that it is a good time rose from 32 percent in May to 41 percent in June; the net was minus 7 percent. 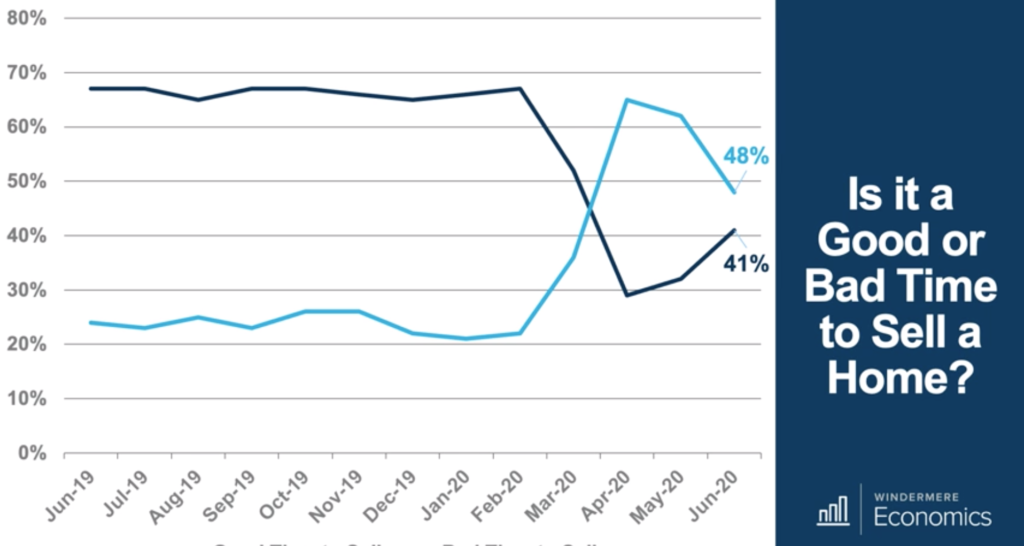 It’s getting better, but it’s well below historic levels, and I think that it’s likely sellers are still concerned about listing their homes as the pandemic persists.

When it comes to price expectations the results were very interesting. As much as there was a nine-point spread in favor of prices rising, it’s tight. Almost a third of respondents think that prices will remains the same over the next 12 months, and I was surprised to see that 25 percent think that prices will actually go down. 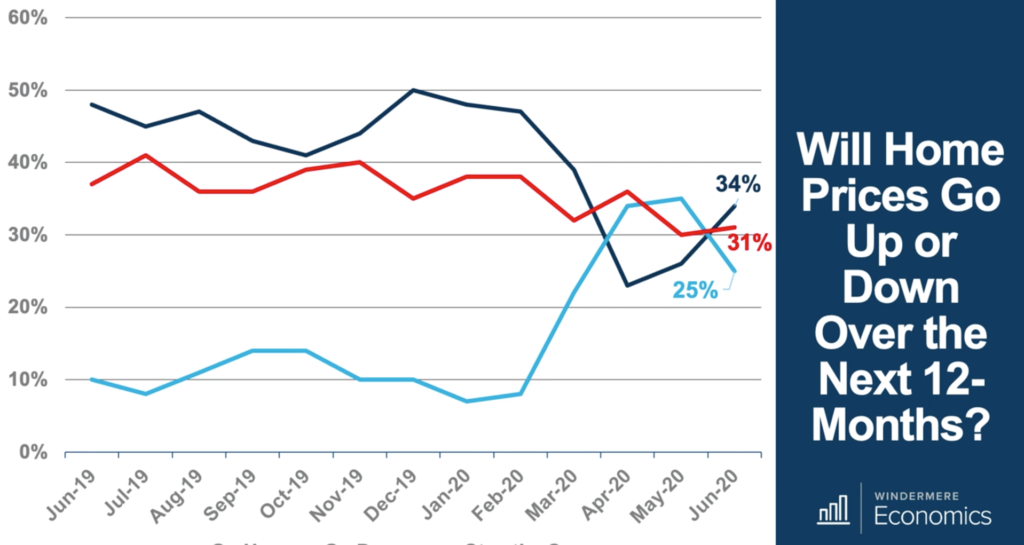 The expectations regarding mortgage rates was also interesting. I was initially surprised to see the share of people who thought that rates were going to rise — especially as rates had been steadily dropping during the survey period. But, in hindsight, it’s actually not that surprising as the question asks about rate expectations over the next year, and it’s actually reasonable to think that rates will rise from the remarkably low levels that are in place today. 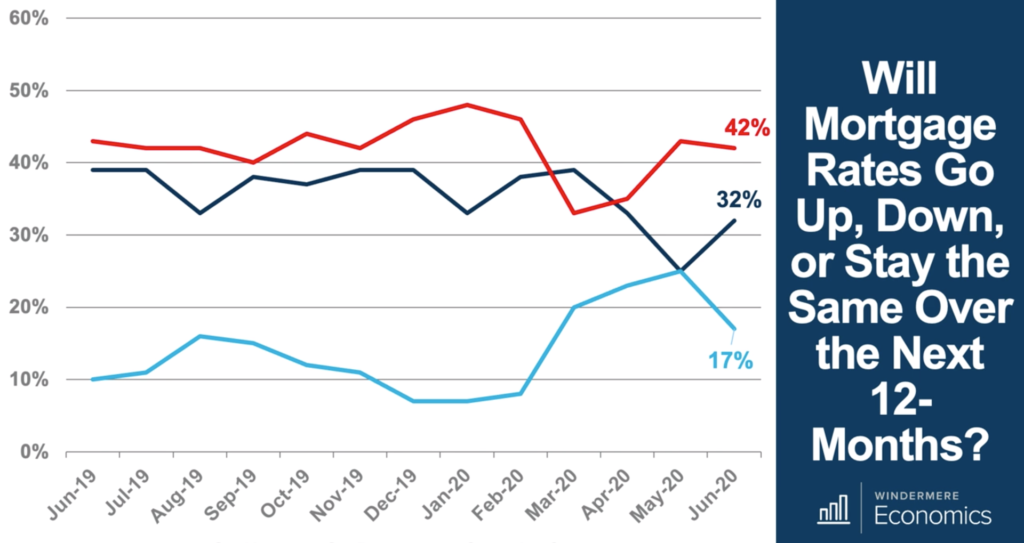 The final two questions are more focused on the broader economy, but they are meaningful as confidence in employment and income are very important when thinking about buying a home.

Last month, just over 1 in 4 survey respondents were worried about losing their jobs. This is the largest share since the summer of 2013, but I must add that the survey does include renters, and it’s likely that they pushed this level higher to a degree. 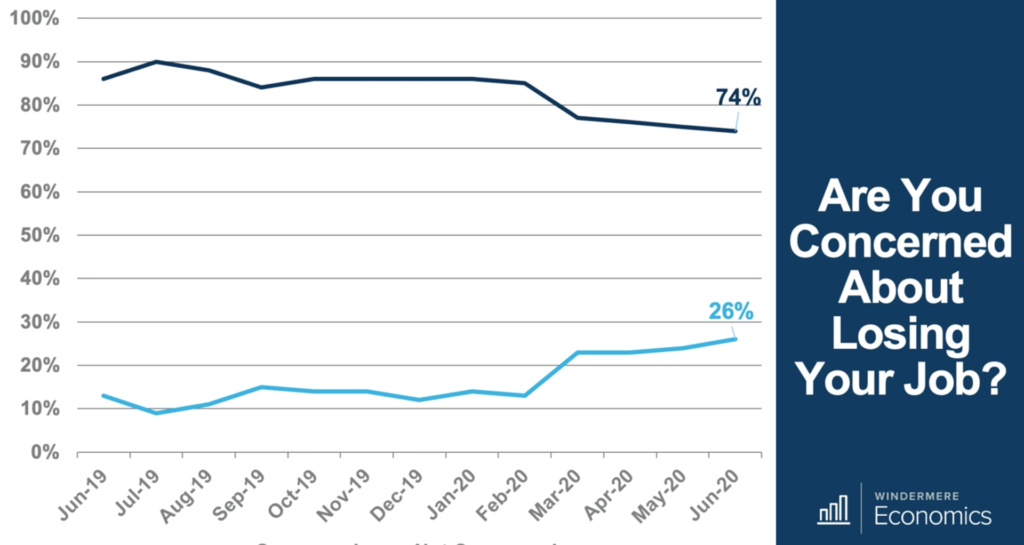 And finally, most thought that their income really hadn’t changed from a year ago — which was a little surprising. But 1 in 4 said that their incomes had risen over the past 12 months, and rising incomes can signify demand from homebuyers. 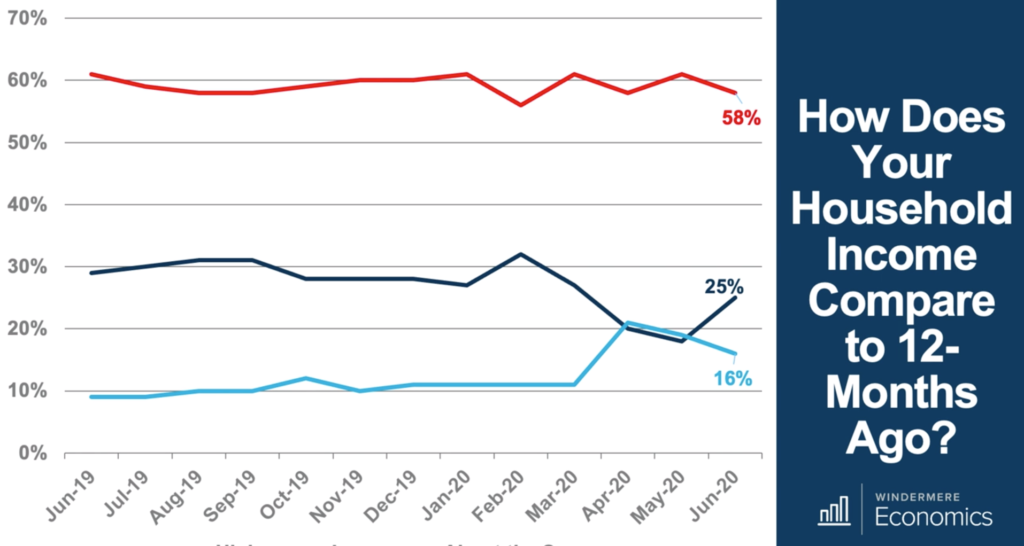 In general, we are showing a remarkably high level of confidence in housing again following the outbreak of COVID-19, and some people’s expectation for a collapse in the ownership housing market.

Of course, this could all change very quickly if we continue to see rising infection rates leading to renewed shutdowns in the economy.

My biggest takeaway from this survey is that consumers were understandably worried when the pandemic hit, but the plummet in the sentiment level that we saw in March and April has done a U-turn, and this suggests that their level of concern has dropped significantly, which is a positive for the housing market.