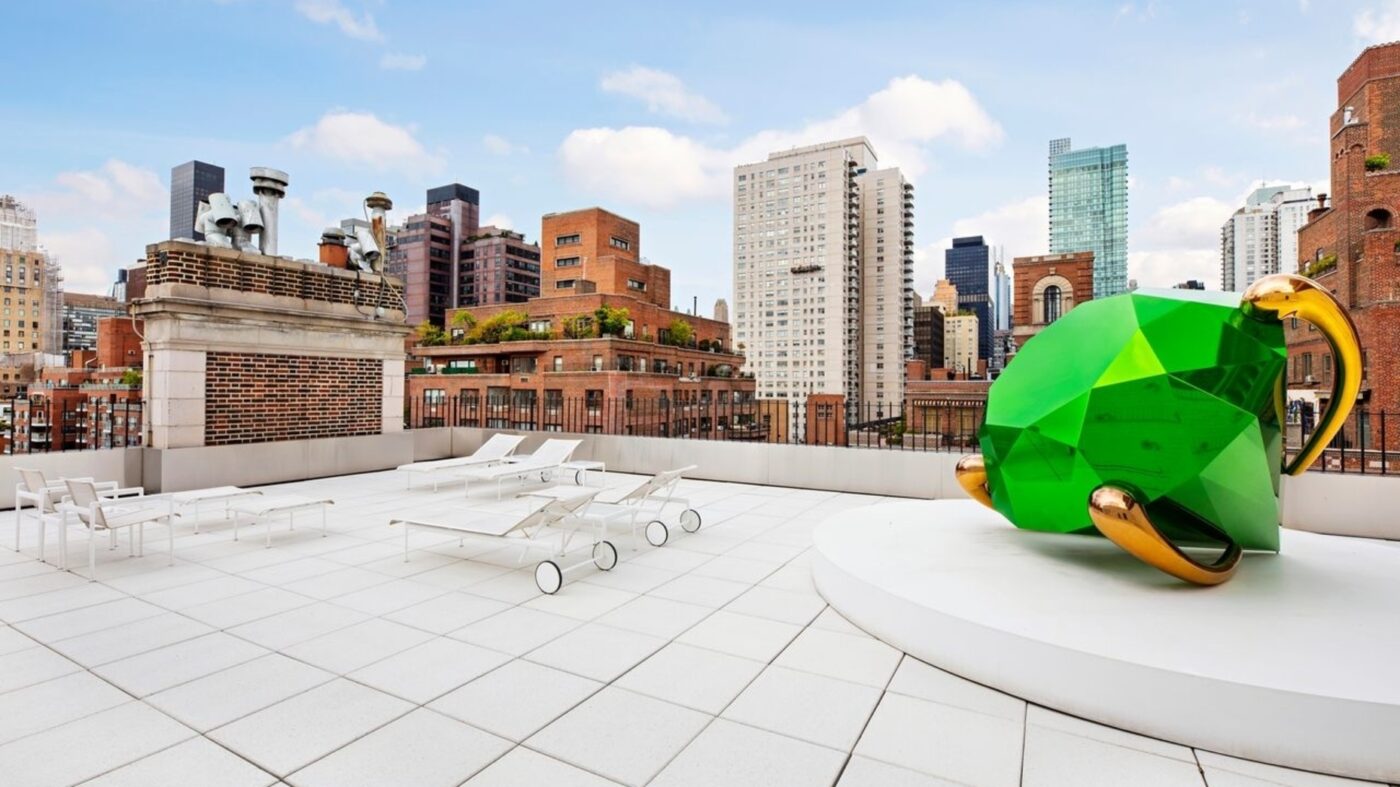 The terrace of the Perry Apartment

A penthouse co-op that could easily double as a modern art museum hit the market in New York City for $45 million.

Known to interior design fans as the Perry Apartment, the 12-room unit on New York’s Upper East Side was listed by Allison B. Koffman and Juliette R. Janssens of Sotheby’s International Realty. Fashion designer Lisa Perry and her hedge-fund billionaire husband Richard C. Perry redesigned the space to showcase their extensive collection of contemporary art.

As the top unit of the 1927 Sutton Place building, the penthouse spans 6,600 square feet and has all-white interiors full of bright paintings, unique art pieces and custom sculptures.

The most striking piece is a 3D painting in the living room — placed between two windows, the bright image of a cartoon interior creates an illusory effect with the real-life views of New York on each side.

Other show-stopping spaces include the dining room where a pair of bright red lips pops against a jet-black, a large outdoor terrace with panoramic views of the city and a shiny sculpture of a giant emerald, and a crisp master suite with plush geometric tiles on the walls and floor.

While the artwork is not up for sale and will be leaving with the Perrys, the museum-like interiors — gallery-style walls, 15-foot ceilings, floor-to-ceiling windows and copious outdoor space — have regularly landed the apartment in various design magazines. According to Mansion Global, they bought it from publishing heiress Janet Annenberg Hooker for $10.9 million and undertook a renovation to make it look like a gallery.

“The Perry penthouse is the biggest wow you’ve ever seen,” Koffman told Mansion Global. “It’s the grandeur, the scale and the magnificence of the space as well was the insane views.”

The penthouse comes with a rich New York history, as 20th century socialite and columnist C.Z. Guest and her husband Winston Guest had called it home before Hooker. Winston’s grandfather and Carnegie Steel Company entrepreneur Henry Phipps had commissioned famed architect Rosario Candela to design the building in the 1920s.

“It’s a beautiful prewar building yet is a contemporary masterpiece,” Janssens told Mansion Global. “It’s like an oasis above the hustle and bustle of the city. It transports you to another world.”

With a net worth of around $1.2 billion, Richard Perry had owned a controlling interest in Barneys, the designer department store that filed for bankruptcy last summer and closed all of its stores by 2020. The Perrys have been unloading several key parts of their real estate portfolio lately — they sold a Palm Beach property for $9.1 million in July but still own another unit in the Sutton Place building, which they bought in 2014 for $7.6 million.

Hemsworth brothers sell Malibu home for $4.9M
Back to top
We are less than 1 week away from Inman Connect! Get your ticket for $99 before prices go up next week.GET YOUR TICKET×
Inmanpot
Log in
If you created your account with Google or Facebook
Don't have an account?
Create an Account
Forgot your password?
No Problem