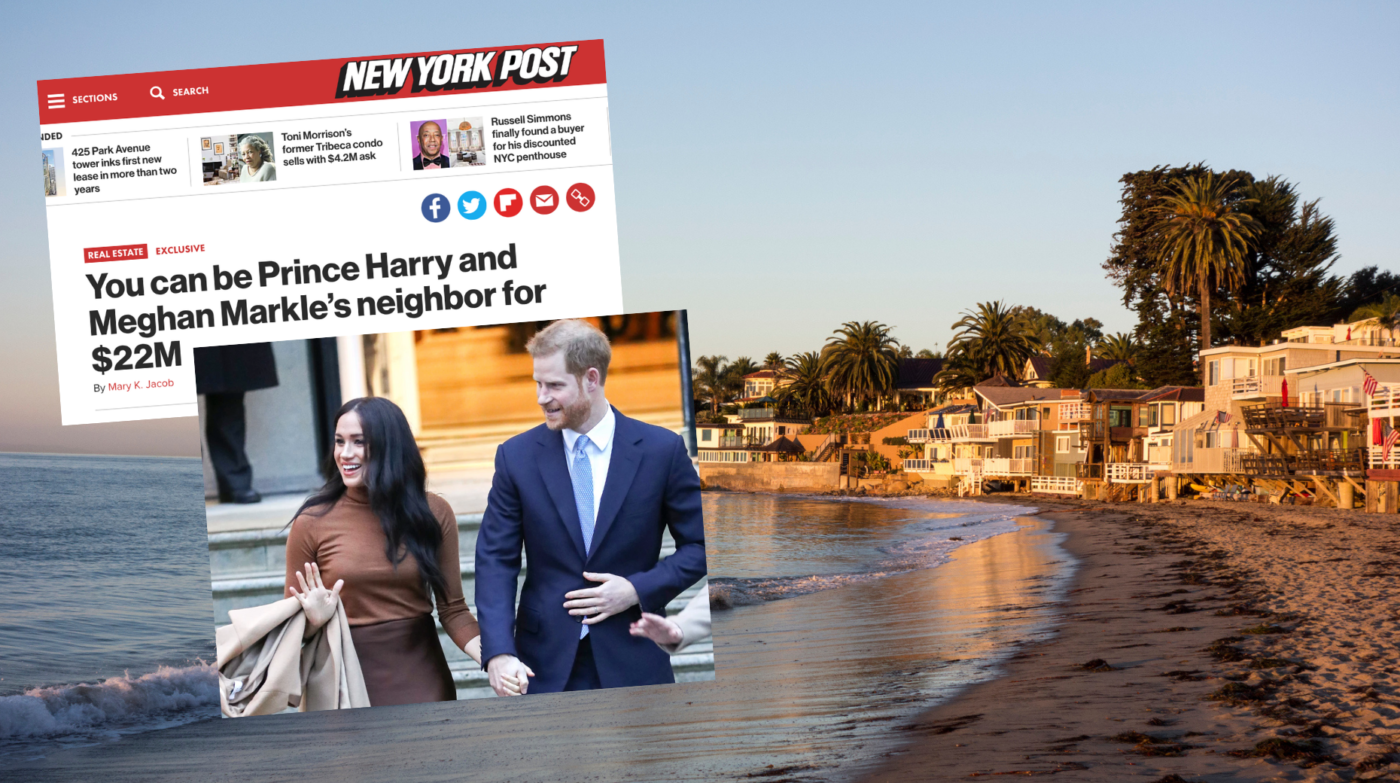 While some agents are milking Montecito’s connection to the Duke and Duchess of Sussex, others are treading carefully with a buyer pool unfazed by celebrity and looking for privacy.

Can the mere mention of Harry and Meghan’s name help sell a home?

Ever since the Duke and Duchess of Sussex gave up their royal titles and came to the celebrity-rich enclave of Montecito, California, to live, listings inviting buyers to become “neighbors” with the royal couple have been popping up all over the place.

Immediately dubbing Montecito the couple’s “new hometown,” news articles rounding up addresses within range of the heavily-guarded $14.7 million, 18,000-square-foot estate purchased by the couple last summer have also been prevalent. In many cases, the word “neighbor” is both an accurate and misleading way of describing anyone who shares a 93103 or 93108 zip code.

The Santa Barbara enclave has been a refuge for celebrities and the uber-rich for decades precisely for its gated nature and extreme privacy. A median listing now goes for $5 million while Oprah Winfrey, Kevin Costner, Drew Barrymore and Ellen DeGeneres have all maintained properties in Montecito at different points in time. Almost every house is hidden from view, heavily guarded and otherwise protected from neighbors or curious onlookers eager to star-gaze.

But with a population of around 9,000 people, Montecito is also a small community in which residents regularly run into each other at farmers markets and coffee shops, Engel & Völkers Broker Associate SiBelle Israel told Inman. Many celebrities are almost as famous or, if powerful but not widely recognized, certainly unfazed by high-profile neighbors.

“It’s more of a global recognition than a local recognition because we have so many celebrities and high-profile people in Montecito and Santa Barbara,” Israel said. “They could have lived anywhere in the world and they chose Montecito. That global publicity is a big deal but, locally, we’re only mentioning it as it applies to [each specific home.]”

Paula Lopez, a Realtor with Coldwell Banker Realty who works in Montecito and the nearby Santa Barbara, told Inman it’s not uncommon to see the Harry and Meghan connection name-dropped not only in listings but even in home tours and initial discussions with prospective buyers. She said an American obsession with royalty can make it exciting even for people who have the budget to buy a home worth eight figures.

In some cases, the homes that are being advertised as being “next to” Harry and Meghan’s mansion are really within walking distance, like the estate once owned by actor Rob Lowe listed for $22.5 million in January. In other cases, they are in neighboring Santa Barbara. Some agents in Beverly Hills, which is a 90-minute drive from Montecito, have even tried to milk the “neighbor” connection in advertising properties that are close to mansions that the couple had rented while searching for a permanent house.

Cara Ameer, a Coldwell Banker associate who works in luxury real estate and divides her time between California and Florida, said that while this type of marketing may draw eyeballs to a property, buyers typically looking to buy in Montecito are looking for something very similar to what brought Harry and Meghan here in the first place. Privacy, a very affluent standard of living and isolation from the rest of the world.

“These are people who are already in the uber-wealthy class of buyers,” Ameer said. “They come from all over the world and [being Harry and Meghan’s neighbor] is not going impress them. In fact, it might turn them off.”

Any kind of increased attention, whether it come from paparazzi or visitors hoping to catch a glimpse of the Duke and Duchess, can be unattractive to a potential buyer looking for privacy. In many ways, the problem solves itself by Montecito’s isolation from the rest of the world due not only to the highly gated nature of its typical properties but also on an economic level, keeping out everyone but the very wealthy.

But the renewed focus on the town has certainly helped some agents draw attention to properties, even if it is difficult to tell whether that leads to concrete sales. The same goes for housing values — while Harry and Meghan’s presence might make the area seem more attractive and increase competition for a brief period of time, agents believe that the the changing zeitgeist and new celebrities emerging to the forefront may eventually add Harry and Meghan to a very long list of famous people calling Montecito home.

But with all eyes on the Duke and Duchess after Oprah;s interview with the pair earlier this month, the national focus on the royal couple s is a certainly an attractive fact for both the nearby residents and agents working to sell nearby properties.

“I don’t think the allure for residents who are looking to buy here is necessarily coming from Harry and Megan alone but it certainly is something they like to share even if they live in the outlying areas,” Ameer said.

GoFundMe to pay off Harry and Meghan's home scrubbed from internet