The popular portal raked in $1.7 billion during the third quarter of 2021, though it also lost $328 million — much of it from iBuying.

In a shocking earnings report that revealed the end of Zillow’s iBuying program Zillow Offers, the popular real estate portal also revealed that it brought in $1.7 billion during the third quarter of 2021.

The company’s revenue between July and September easily bested Zillow’s most recent earnings periods. However, despite the positive revenue haul, Zillow reported a net loss of $328 million, reversing a trend from recent quarters that saw the firm report a profit. Zillow’s most expensive business was its Homes segment, which includes iBuyer Zillow Offers and which lost $422 million in the third quarter of the year.

Those losses were offset by profits in other segments of the company, but in the end iBuying was simply too expensive for Zillow to be profitable in the third quarter of 2021.

Analysts had expected Zillow to report $1.99 billion in revenue in the third quarter.

Going into Tuesday’s earnings, Zillow stock dropped from an opening price of just over $95 per share to between $85 and $86 per share as the markets were closing. After the company published its earnings Tuesday, shares plunged even lower, ultimately dropping in after hours trading to below $78 — lower than at any point in the last year. 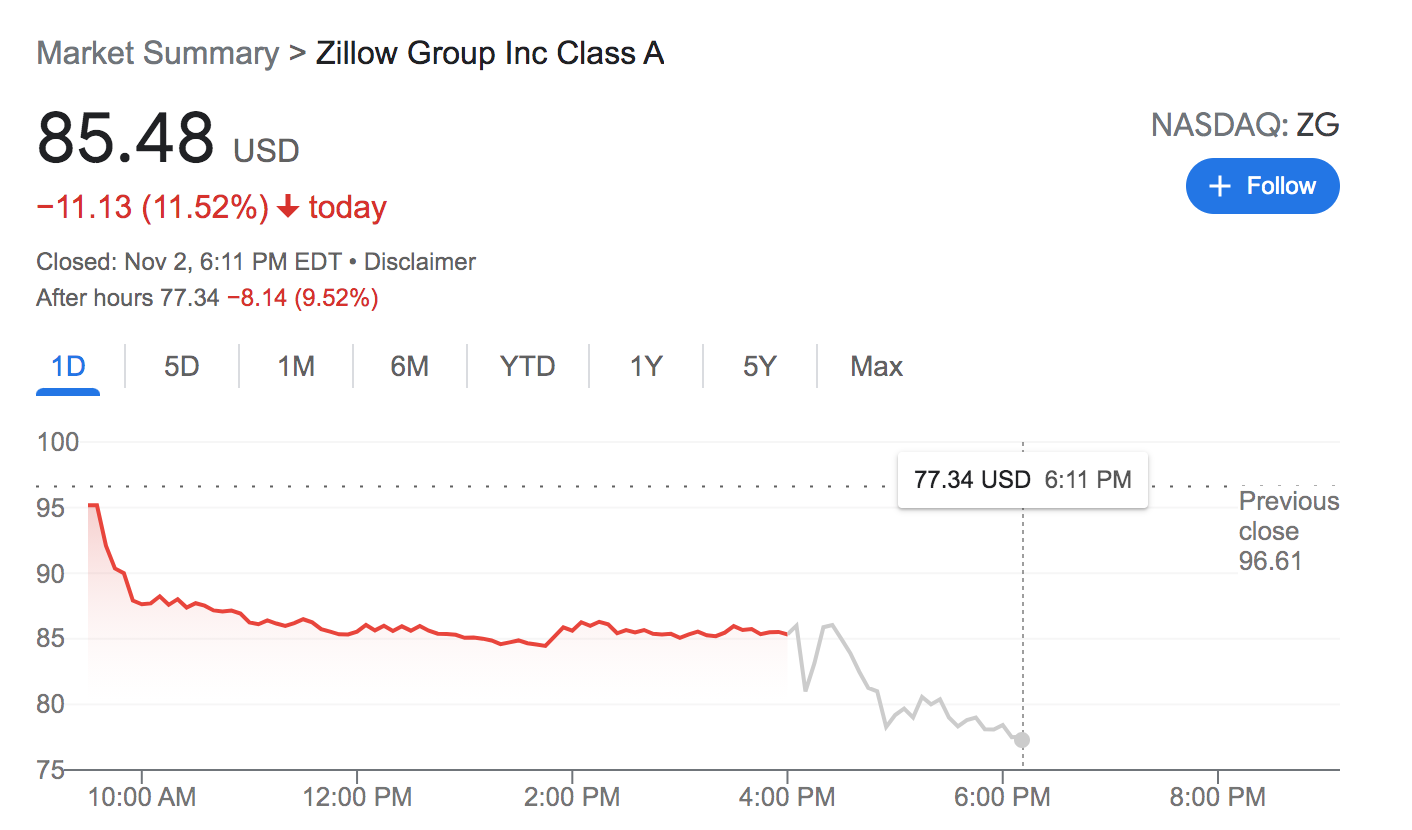 As of the end of trading Tuesday, Zillow had a market cap of about $21.3 billion.

Zillow’s share price has fallen over much of 2021. Back in February, Zillow shares hit an all-time high and were trading at more than $200. There have been ups and downs since then, but the price has generally followed a downward trend. This is in keeping with some other tech-focused real estate companies such as Compass that have also seen falling share prices, though other firms such as Realogy are up for the year.

In Zillow’s case, recent pivots have likely weighed on investors’ minds. Chief among them is the fact that last month Zillow paused purchases through its Zillow Offers iBuying program. Then this week, a new report indicated the company hopes to sell about 7,000 houses. The report indicated Zillow hopes to earn $2.8 billion from selling the homes, and would attempt to work with institutional buyers.

That report was published in the middle of Monday — about half a trading day before Tuesday’s drop in share price.

The further drop of Zillow’s share price in after hours trading Tuesday evening suggested investors were similarly displeased with the outcome of the company’s iBuying program.

The end of Zillow Offers consumed most of the company’s earnings call with investors Tuesday, with co-founder and and CEO Rich Barton ultimately saying that “fundamentally we have been unable to predict future pricing of homes to a level of accuracy that makes this a safe business to be in.”

“Our observed error rate has been far more volatile than we thought possible,” he also said during the call.

Among other things, Barton indicated it has been challenging to price homes amid a pandemic, supply and demand imbalances, and labor shortages. On top of that, Zillow needed to grow it’s iBuying business so that it could operate at scale. However, doing so would be too expensive and was “beyond the tolerance level that we are comfortable with moving forward,” Barton said.

Despite recent stock and iBuying woes, Zillow has had a string of generally positive earnings reports in the recent past. In August, for instance, Zillow revealed that between April and June of this year it earned $1.3 billion in revenue. That was better than preceding quarters, though the spring did see Zillow’s profits dip relative to prior reporting periods.

In May, Zillow reported earning $1.2 billion in revenue and $52 million in net income during the first three months of 2021. That made it Zillow’s most profitable quarter ever — even beating the immediately preceding quarter, at the end of 2020, which up until then had also been the company’s best.

Though Zillow Offers is now winding down, Barton did say during the investor call that his company will continue to invest in its Zestimate valuation tool, the Premier Agent lead generation program, and ShowingTime, which it recently acquired.

“We just closed the ShowingTime acquisition,” Barton said, “which is a way for us to look at creating a tour reservation system.”

Update: This post was updated after publication with additional information about Zillow stock, and with commentary from the company’s call with investors.