by Nate Dadosky
Share this article
You successfully shared the article.
Close

In this tutorial, I’m going to show you how to build a Facebook Messenger advertising campaign that will generate more homebuyer/sellers leads and deliver them right to your smartphone.

A strategic Facebook Messenger advertising campaign can generate more homebuyer and seller leads and deliver them right to your smartphone.

I’m going to walk you through each step in detail so that you can start generating new leads on autopilot.

If you’re not running paid Facebook ads yet, this is a great campaign to start with because everything happens right on Facebook — you don’t even need a website.

It’s also perfect if you’re always on the go and can’t check your email or if you’re constantly with clients and can’t pick up the phone.

This blog post is almost identical to the YouTube video above, so feel free to watch that if you’d prefer!

Step 1: Setting up the campaign

Our campaign starts — like every other campaign — inside Facebook’s ads manager at the campaign level.

To run Facebook Messenger ads, you need to select “Traffic” as your objective.

Next, we’ll move onto the “Ad Set” level. In my example, I’m targeting people within a 25-mile radius of Charlotte, North Carolina, who are 35 and older and have a personal income of between $75,000-$150,000 per year (I’m also only targeting English speaking individuals).

If I had left my targeting alone at this point, my audience size would be 370,000 according to Facebook (that number is not pictured above).

That isn’t a bad number, but it might be a little too broad. Alternatively, we can hone in on prospective homebuyers or sellers, specifically.

If you click on “Narrow Audience” under the “Detailed Targeting” section, you can add additional constraints to reduce your audience size.

In this example, we’ll add “Likely to Move” as a new behavioral criteria. The logic here is that individuals who are likely to move are probably in the market for a home or they’re trying to sell their home.

After we apply that additional constraint, our audience size is reduced down to 5,100 (which you can see in the screenshot below).

That’s pretty small compared to our original audience size of 370,000, but keep in mind that this group is much more qualified than the previous, larger audience because they’re likely to move (according to Facebook).

Moving on to the “Placements” section, I’m going to recommend that you leave “Automatic Placements” selected. This is something I’ve been testing lately with some success.

Usually, I’d only select Facebook or Instagram feeds, but Facebook has gotten better at showing ads to people in the places where they’re most likely to click on them, so I recommend you test this out.

I don’t recommend that you go lower than this, and here’s why: in order for Facebook to optimize your ad (show it to the people who are most likely to engage with it), it needs to be able to test it on a large sample of people.

If you set a daily budget below $20, Facebook is going to have a hard time delivering your ad to a large enough sample of people resulting in slower optimization and, ultimately, substandard results.

Note: Just because you set your daily budget to $20 does not mean Facebook will spend that whole amount. It’s just your daily cap.

Under the “Optimization for Ad Delivery” section, we’ll select “Impressions.” Facebook classifies an impression as any time your ad appears on a device’s screen.

By selecting “Impressions,” we’re also opting to be charged based on how many times our ad is seen 1,000 times or CPM (as opposed to every time someone clicks on our ad or CPC).

“Impressions” is not always the best option for optimizing an Ad Set, but in this case it probably is.

Because we have such a small audience size — and because we know that audience is qualified to some degree — we want Facebook to show it to as many people in the audience as frequently as possible.

Based on Facebook’s estimate, we should be able to show this ad to everyone in the audience of 5,100 people in about a week.

If, instead, we were to leave our audience at its original size of 370,000, we would be better off optimizing our Ad Set for “Link Clicks.”

In that case, we would want Facebook to help us narrow in on the best prospective leads by only showing our ads to people who have clicked on other ads in the past.

So which way should you set up your campaign? I would test both.

Tip: Facebook advertising is all about testing. The people who have the most success with Facebook ads are those who are constantly and patiently testing.

Moving on to the “Bid Amount” section; if we select “Manual” Facebook gives us a suggested bid and a range (pictured in the screenshot above).

I won’t go into how Facebook calculates this, but it’s basically determined by supply and demand based on how many people are trying to show ads to a particular audience given a limited amount of ad real estate.

If you set your manual bid toward the higher end of Facebook’s suggested bid range, then your ad will reach a larger portion of your audience much faster.

In this case, if we tell Facebook that we’re willing to spend $9 to show our ad 1,000 times, that almost guarantees that we’ll be able to show our ad to all 5,100 in our audience in about five days.

In this example, the decision I have to make is whether showing my ad to the entire audience of 5,100 people is worth $50 (and I think you’d agree that is).

If you’re not comfortable setting a “Manual” bid, then don’t worry. Just leave it set to “Automatic,” and let Facebook figure out what the right price is. It will take a little longer, but it might save you some money.

Tip: Don’t assume that Facebook is going to just waste your money if you set your bid to “Automatic.” Its goal is to get you results (generate positive ROI for your business) so that you’ll continue to spend more money advertising on the platform.

Note: Keep in mind that it takes some time for Facebook to optimize your ad and start showing it to the right people. A good rule of thumb is to start running a campaign for three days without changing any settings (don’t even check your results until those three days are up).

After three days, if you’re getting positive results, you can start to scale up your daily budget (but only do it by about 25 percent each day).

As a good rule, I wouldn’t give up on a campaign that’s been running less than two weeks. If after two weeks you’re not getting good results, then it might be a good idea to start over with a new campaign and a different strategy.

Next, we’ll move on to the “Ad” level. Unlike regular ads, we need to select “Messenger” as the “Destination” for our ad as opposed to “URL Link.”

In this example, the ad is really simple. It’s just an image of a fictitious real estate agent and some text that says “Can I buy you lunch?”

This is a great example of an image and an offer that will get people’s attention because you’re offering something of value to prospects upfront as opposed to asking them for something.

Tip: Even better than this would be a picture of yourself actually holding up some food and a $10 bill (feel free to steal that idea).

I use Adobe Photoshop and Adobe Illustrator to create my ad images, but you can use anything you want.

A great free tool I recommend to create images like this is Canva.

Tip: Make sure your image is 1200 pixels-by-628 pixels, and keep in mind that text on your image can’t take up more than 20 percent of its total size otherwise Facebook will limit your ad’s delivery.

Now obviously you’re not going to buy lunch for every person who clicks on your ad because you’ll be qualifying everyone who reaches out to you before you agree to meet with them.

You can also change the ad to “Can I buy you coffee?” if you’d prefer.

The text in my ad says, “Looking to buy your dream home? I’d love to buy you lunch and show you what’s on the market in Charlotte. If that sounds good to you, click the ‘Send Message’ button below, and let me know when you’re free for lunch.”

If you’re trying to generate homeseller leads, you could also create an ad that asks if they’re looking to sell their home.

Tip: Make sure to tell people what they should reply to your ad with so that they know exactly what to do. It’s always a good idea to include a clear call to action and an obvious next step in every advertisement.

Step 7: Following up with leads

If you click the “Set up Messenger Content” button, you can choose how each conversation starts and even set up automatic replies or questions that start to qualify leads and get more info automatically.

However, because you probably won’t be getting thousands of messages a day, I recommend that you keep it simple and just include a picture of yourself along with “When are you free for lunch?”

Then, you can manually follow-up with leads individually.

Tip: Make sure you get the person’s phone number or email address so that you can follow up outside of Facebook.

To get notifications on your smartphone every time someone messages you, you’ll need to download the Facebook Page Manager app (you won’t be able to use the Facebook Messenger app because it’s linked to your personal Facebook page and not your business page).

Just download the app, and then make sure to turn notifications on so that you’ll know when people are reaching out to you.

Have a question? Leave a comment below or reach out to me using the email address in my author bio.

Let me know if there is something specific you want me to cover that relates to Facebook advertising or lead generation in general! 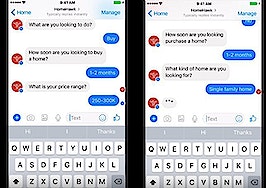