Are you part of “The Plan to Save Real Estate”? Launched earlier this week by Scottsdale, Arizona-based real estate coach Greg Hague (owner of Real Estate Mavericks), this unusual crowdfunding campaign seeks to raise $1.1 million to fund a brand new, Realtor-backed competitor to Zillow. 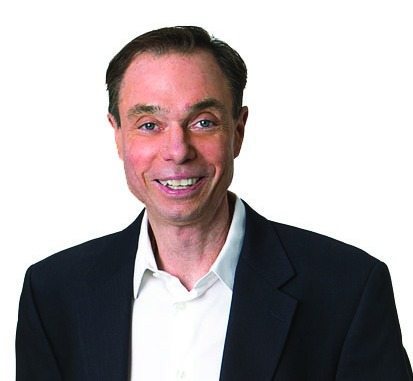 Are you part of “The Plan to Save Real Estate”? Launched earlier this week by Scottsdale, Arizona-based real estate coach Greg Hague (owner of Real Estate Mavericks), this unusual crowdfunding campaign seeks to raise $1.1 million to fund a brand new, Realtor-backed competitor to Zillow.

Some observers question the wisdom of trying to mount yet another industry-led challenge to Zillow Group, while still others dismiss “The Plan” as the work of an opportunist taking advantage of gullible agents.

But Hague appears to have built a following over the years, including agents who deploy his $990 listing-fee model, which often functions as a lead-generation tool. Many agents who know him believe he has the industry’s best interests at heart, a sentiment with which he heartily agrees. 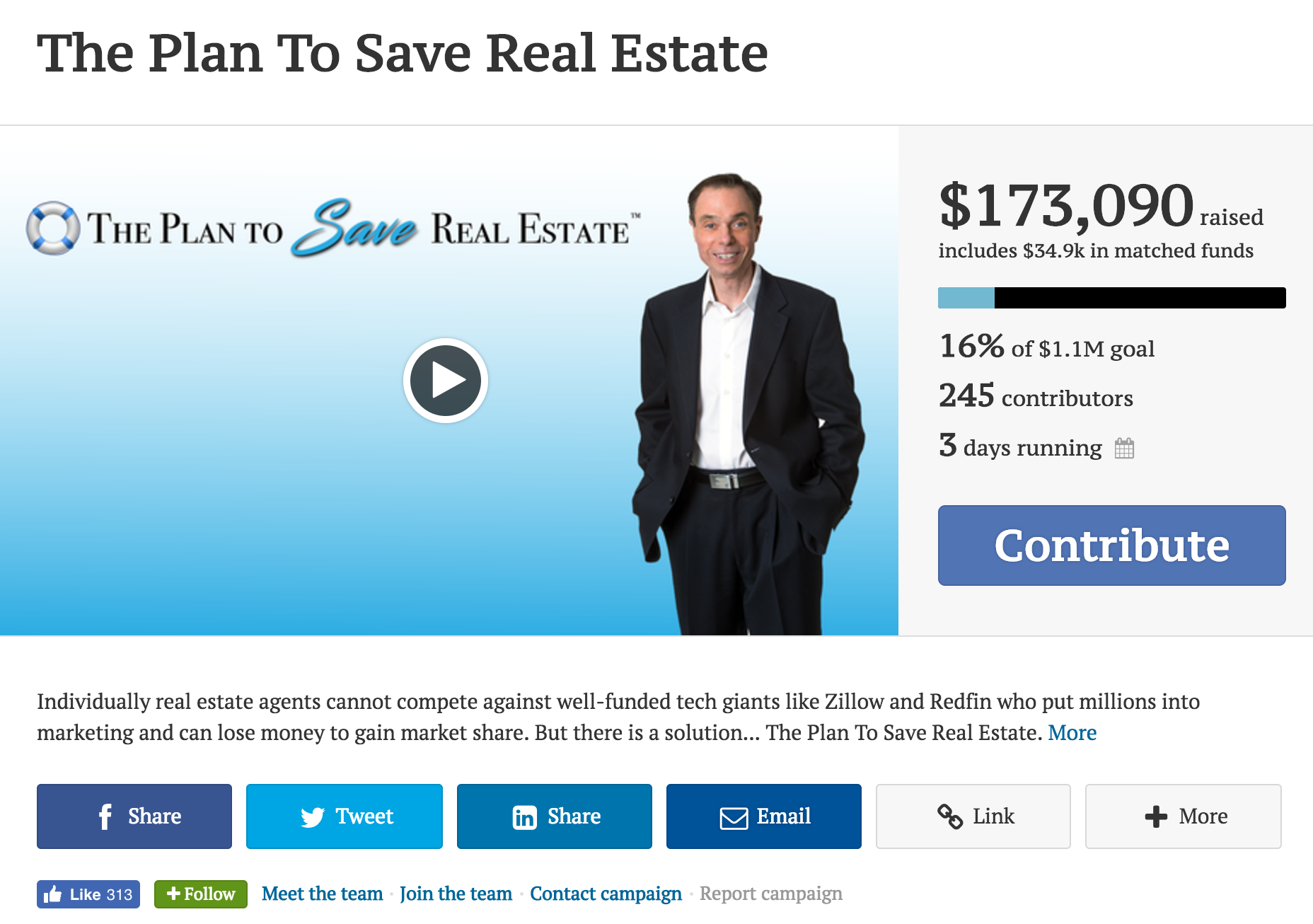 How the plan got started

“The plan to STOP ZILLOW is in motion,” Hague wrote in a mass email sent on September 16, around when he launched the campaign’s fundrazr.com page.

“STOP ZILLOW’ was also the name of an online petition Hague had circulated earlier in June, calling on NAR to act against Zillow Group after the company launched Zillow Instant Offers, a program that allows homesellers to receive quick offers from big investors along with a CMA from a Zillow agent advertiser.

Hague’s petition garnered 40,000 signatures, he told Inman, but the URL to the petition has since been removed and now redirects to the fundraising page for “The Plan To Save Real Estate.” Hague said he did this because NAR indicated that “they essentially weren’t going to do anything,” about Zillow’s Instant Offers.

Hague has promoted the crowdfunding campaign through mass emails ending with his name and coaching moniker, “The Real Estate Maverick.” “We even have the money,” Greg added in the September 16 email. “Just one detail, it’s in your wallet.”

And open their wallets some real estate agents have — though not as much as the fundraising page might lead you to believe.

The project’s fundraising page describes “The Plan To Save Real Estate” as a “well-funded, nationally marketed website that allows each of us to leverage our collective power” — later stating that initiative will be “what realtor.com should have been if NAR hadn’t sold it.”

How Hague wants to battle Zillow

The plan is to eventually sell shares of the site exclusively to real estate agents and brokers. And it would have one primary goal: “To take buyers away from Zillow, Redfin, and every other website.”

In part, through a “unique” website feature that Hague says he can’t disclose yet. The other piece would be a massive marketing campaign to promote the site, which backers would be able to review ahead of time.

The site would be “unveiled” to every agent in America. After that, the new company would raise an additional $50 million by taking advantage of a securities law exemption to sell shares exclusively to licensed agents and brokers, but without launching a traditional initial public offering (IPO).

Finally, it would deploy most of that funding “to launch a national marketing blitz to make what will then be your website the #1 website in real estate.”

The brokers and agents who would buy shares in the company would control site and could vote in a CEO to replace Hague, if they liked, Hague said. It could eventually generate the revenue by charging agents $30 per listing, investing the money in advertising to reel in more traffic.

If the site attracted enough buyers, agents would be able to pull their listings off sites like Zillow without hurting their seller clients, he said.

In a possible reference to the Broker Public Portal and Upstream, two-other industry funded projects attempting to give brokers more control over portals, the Hague’s crowdfunding page notes that other “well-intended website projects failed because they didn’t have a compelling differentiator backed by a well-funded national marketing campaign.”

“I mean I’m not a BSer, this will draw buyers like crazy,” he said, speaking of the site’s planned special feature. “It’s something no website has ever done.”

Perks offered in exchange for contributions include a “personality speaking course” from Kevin Ward — one “team” member listed on the funding page — and a Facebook training course donated by Bob Stolze. 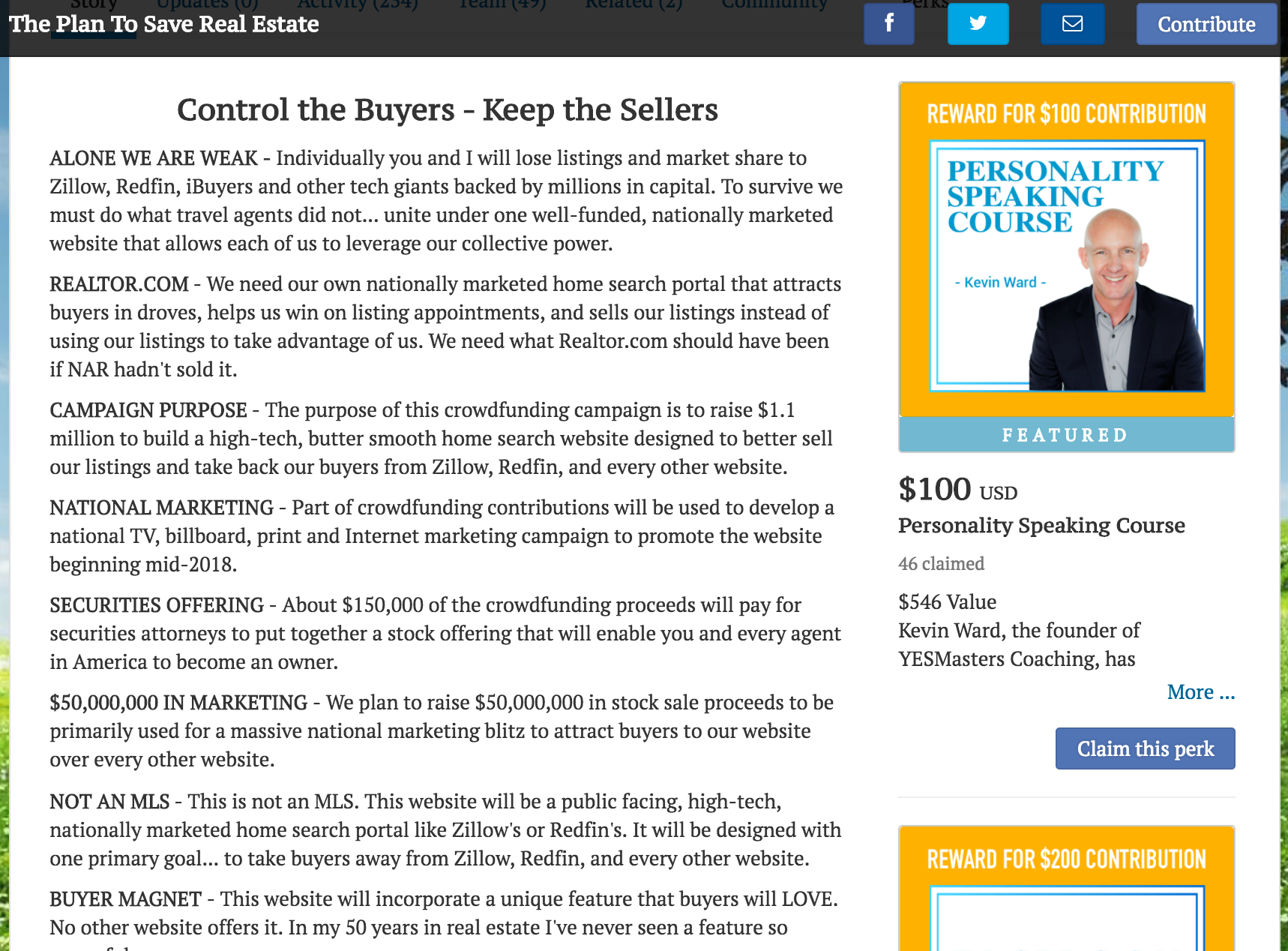 “I said this will help you get out there and at the same time do a good thing,” Hague said, describing how he persuaded Stolze and Ward to donate their services.

So does Hague also see “The Plan To Save Real Estate” as a way to get his name out there as well?

“I guess people could perceive that I’m trying to build my brand at 68 years old,” he said. “I can’t imagine why. I mean, I could be on a cruise boat right now.”

To remove the appearance of a conflict of interest, he has stopped selling any of his training courses, but he will offer one of them for free to agents who donate $50 or more, he said. He also emphasized that he does not need money, having earned more than enough through his many business ventures over the years.

In addition to his coaching company, those ventures include a luxury brokerage, Hague Partners, and a $990 list-side commission system called 990 Sells that he licenses to agents, including coaching students.

The website for the product greets visitors with: “Spoil your family, not your Realtor.” But that is only meant to attract leads for agents, not to disparage them, he said.

Moreover, his model is designed in such a way as to always give agents the opportunity to walk away from a deal with at least a 3 percent commission — such as by conditioning the $990 fee on the homeseller finding the buyer or on agreeing to use the agent to buy a home.

He teaches the model for a similar reason to why he has launched “The Plan To Save Real Estate,” he said: to help agents compete in an industry threatened by new business models.

Hague recently removed his CEO bio page from 990sells.com out of concern that agents would think he ran a low-fee brokerage — even though 990 Sells is a lead-generation system, not a brokerage, he said.

While he won’t apologize for teaching agents who want a way “to compete with the lower price commission models,” he regrets removing the bio page, he later said by email.

Several agents who know Hague or have taken his training courses say he has a good reputation and is intelligent and hardworking, even if his sales techniques aren’t for everyone.

David Michalski, CEO of Falls Church, Virginia-based Fairfax Realty, said over 100 of his agents signed up for Hague’s 990 Sells program after Michalski licensed the system for some ZIP codes.

Enthusiasm declined when leads that Michalski thought would be sent to agents who enrolled in the program didn’t materialize.

“Nevertheless, a few agents ‘got it’, worked hard, and did achieve some measure of success,” Michalski said.

Michalski considers Hague a friend and said that he “teaches you to be a better agent by emphasizing the need to work hard and be creative.”

“If nothing else, he is stirring up an interesting debate which is one thing he always likes to do and he does it well,” Michalski  said about Hague’s project. “I guess it’s the Maverick in him.”

Many skeptics question some of Hague’s assumptions, arguing that launching a direct competitor to Zillow and its established ilk is a lost cause.

In the second quarter alone, Zillow Group reportedly shelled out $131.2 million on sales and marketing — more than double what Hague’s agent-backed company would raise in a mini-IPO — if everything went according to plan.

Due to the long odds, some observers question Hague’s motives.

“What you have here is someone who is preying and feasting on those in our industry that choose to remain uninformed and ignorant,” said Woodlands, Texas-based Realtor Ryan Bokros. “I liken it to those investment schemes that are sold to senior citizens….ole slick willy getting one over on folks.”

Hague said that if “The Plan To Save Real Estate” doesn’t achieve its $1.1 million funding goal, which he said he strongly doubts, the project would use whatever funds it receives to at least build a website.

In a Q&A video the project, Hague doesn’t address the possibility of failure.

“Bottom line is as long as I stay alive and healthy and I’m alive and very healthy right now, and as you might see, have a pretty fair amount of energy, we are going to reach our financial goal,” Hague says in the video. 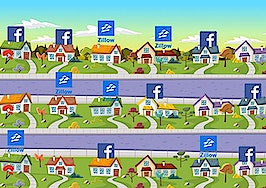 Is Facebook the new Zillow for real estate ads? 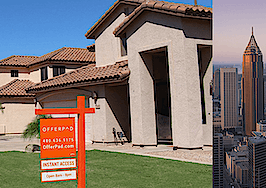 The Inman Files: Zillow is fighting a war on two fronts