G. Crescoli on Unsplash
by Lou Barnes
Share this article
You successfully shared the article.
Close

Should homebuyers and sellers working on transactions now worry after the Dow dropped 1,175 points yesterday, marking the worst single stock market day since 2011? No, not unless the six-and-a-half years since the 2011 plunge have worried you. They have turned out just fine.

Should homebuyers and sellers working on transactions now worry after the Dow dropped 1,175 points yesterday, marking the worst single stock market day since 2011?

No, not unless the six-and-a-half years since the 2011 plunge have worried you. They have turned out just fine.

The primary cause of this tumble? Markets that go straight up tend to go straight down. Think of it this way, in housing terms: if a buyer put her entire down payment into the stock market (which no one should ever do) on December 4, after a cumulative Dow drop of 2,255 points, our imaginary homebuyer still has everything that she put into the market. Straight up, straight back.

That’s how silly stocks have been, not housing. By the way, professionals discuss stock markets in terms of the S&P 500, or the Russell 2000. But civilians think in terms of the Dow, and if you make fun of us, I’ll shoot back. 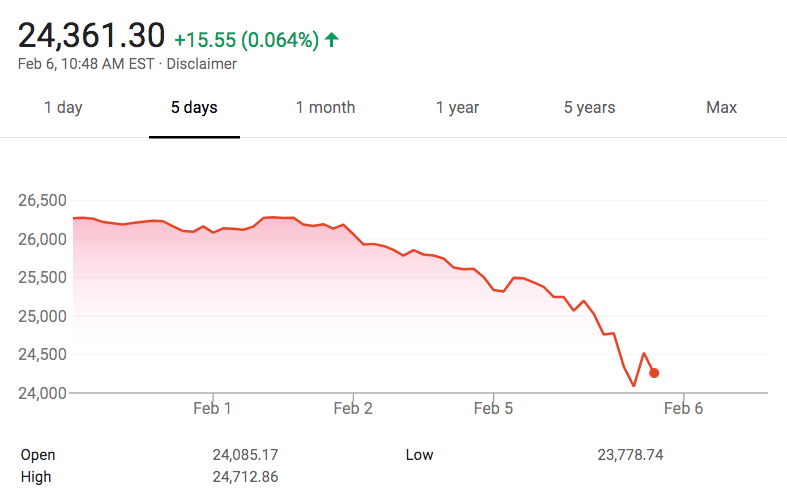 It could drop another couple of thousand points in the near term (or not) to a layer of “technical support,” but true support lies in the 17,000-18,000 Dow range. “Support” is defined as a lot of trading near a particular level, meaning that investors have paid that price for a long time, and anyone wanting to sell at that price had many chances to do so.

The grave weaknesses in straight up: Everyone has a profit, which during a significant drop tempts them to sell quickly. During straight up, no one dares to “short” the market, betting on a future drop. Short-selling is the most powerful of market disciplines, and when “shorts” are driven out altogether by optimists, look out below. See Las Vegas condos, 2006.

At a minimum, the stock market will make this switch: investors buying every dip will switch to selling on up-moves — until new support is built.

Here’s more long-term perspective: In December 1996 after a huge stock run, Alan Greenspan gave a speech warning of “irrational exuberance,” which punctured the market briefly. Care to guess at the Dow value 21 years ago? 6,437. Is it reasonable to expect a durable Dow value 20,000 points higher in just 21 years?

Global trade has been a great boon — it always is, no matter when or how despite painful dislocations. Same for information technology of all kinds. It is not an accident that stocks have done well during the longest-ever period without war among great powers (1945 was a long time ago, and we’re getting used to the idea). The only part of the world languishing behind an iron or bamboo curtain is North Korea. Despots in places like Venzuela and Russia make life tougher than need be, but even they are at least partly open to trade.

However, if we have big up-side volatility, we must expect downside. And now that big up-and-down volatility has begun, expect that.

Housing and the economy in general do respond to a “wealth effect.” If stocks enter a persistent decline, housing will feel it. But such a decline might be the best single thing for new Fed Chair Jay Powell — his first day, yesterday!

Other than the foolishness of straight up, the serious cause of the stock break in the last week has been the recalibration in the credit market. In bonds and mortgages (my crowd) we’ve spent the last six years razzing the Fed for repeated forecasts of faster economic growth and faster rate hikes, which never appeared. We did not take the Fed seriously, and we were right. But in just the last week, a combination of trends and brand-new data have said that the Fed may suddenly be too late — too slow and too little to pre-empt growth which is too hot and can lead to inflation.

Right now, anything that stocks do to take heat off the Fed is excellent news for housing. We care about interest rates more than any pain in stocks, and Monday helped to take the edge off of new Fed fear.