“It still comes back to the relationships and relationship-building and keeping in contact with the other humans.”

In Texas, one Coldwell Banker franchise has shifted nearly all of its $150,000 marketing budget from newspaper advertising to social media while retaining a sizable expenditure for staging open houses — an old-school move they still believe to be invaluable for generating business.

At another Coldwell branch in Oklahoma, a top-producing octogenarian couple have thrived as sales agents, in part by embracing the company’s Customer Relationship Management tools despite having no computer at home, and refusing to let go of that aging relic: the fax machine.

“What fascinates me personally the most about technology is that we’ve got these tech tools that automate things for our lives, but at the same time it still comes back to the relationships and relationship-building and keeping in contact with the other humans,” said Kathy Fowler, an Oklahoma City broker associate with Coldwell Banker Select, who said her octogenarian colleagues have succeeded through a savvy combination of sales skills both old and new.

From the Midwest to the coasts, in fact, real estate professionals are successfully integrating new technology with traditional sales strategies — even as they call on leaders to more quickly embrace cutting-edge digital platforms, apps and lead generation tools to stay competitive. These and more fascinating results emerged from Inman’s inaugural Real Estate Leadership Survey of 787 industry professionals, conducted online in February 2018.

What leaders understand about tech, and what they don’t

One thing that was apparent: despite some of the aforementioned examples of how pros are incorporating new technology, leaders have room for improvement.

A total of 39 percent of respondents to Inman’s survey said the leadership within their companies is “very techie,” while another 46 percent reported that top executives are “somewhat techie.” At the same time, 36 percent worried that not adapting quickly to new technology, or a lack of technology altogether, are twin elephants in the room that executives are consistently failing to address. 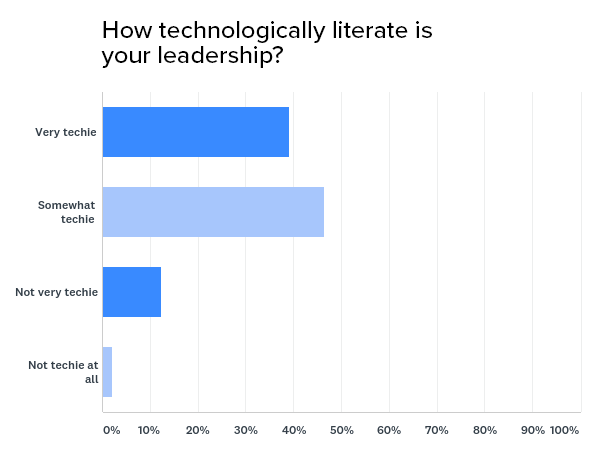 Among the trends most widely embraced by senior executives, social media, digital marketing and lead generation tools are the most prevalent, while more sophisticated innovations — like artificial intelligence, augmented reality and virtual assistants — have yet to take hold despite scattered interest from rank-and-file real estate agents, according to the survey. 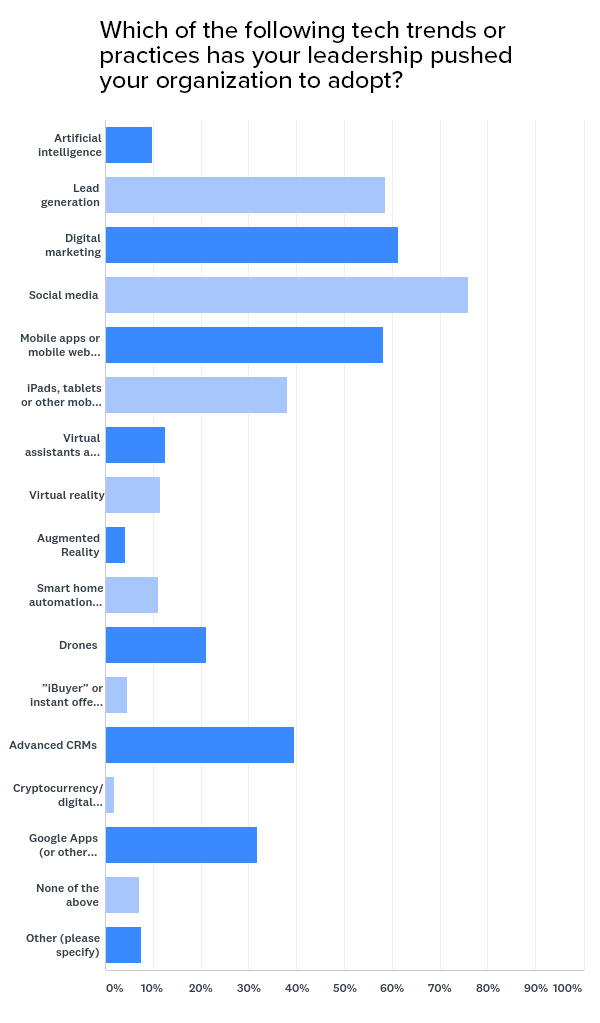 But not everyone in the rank-and-file is thrilled with such a wide embrace of technology, according to the poll. Many agents reported lackluster products and long-term contracts, not to mention a flash-in-the-pan lifecycle for some tools that fall out of favor at lightning speeds.

“Adopting poor technology and then being tied into a long-term contract compounding the poor decision,” a Tahoe City, California, Realtor wrote, balking at questionable tech purchases.

“Jumping around to the ‘next best thing,’” added a Virginia-based listing agent, citing a gripe among colleagues. “Too many tools and too little intensive instruction on how to use them.”

The value of focus

When it came to technology that leaders should be using more of, respondents to Inman’s survey were split. Over 24 percent of respondents said they would like to see more use of CRM software. The next highest category of votes was “none of the above,” at over 23 percent, followed by artificial intelligence and virtual assistants, at over 21 percent (which should bode well for Keller Williams’ recent tack). 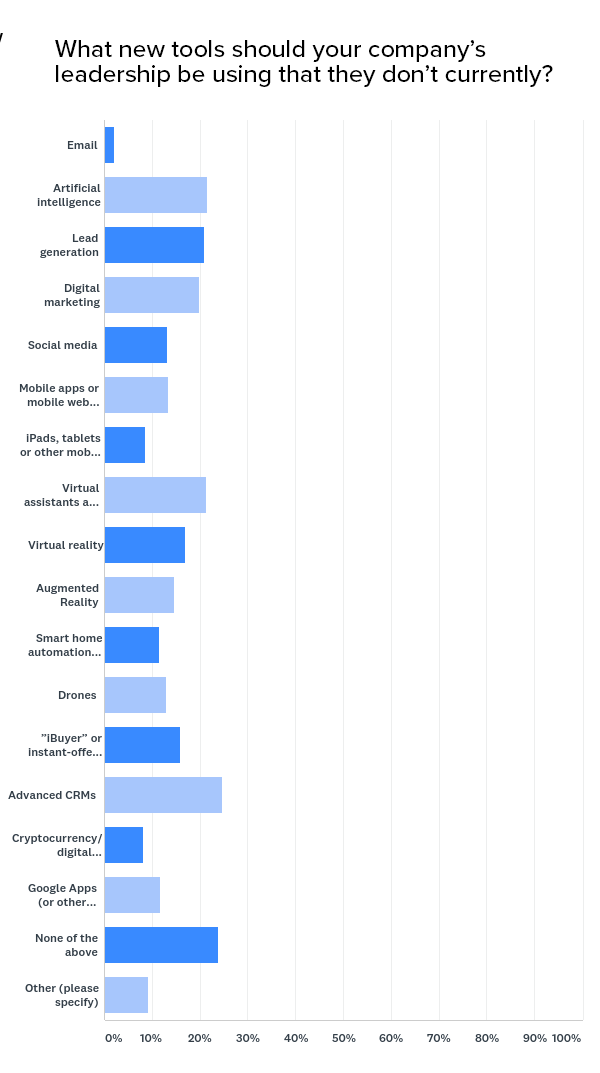 Perhaps somewhat surprisingly, cryptocurrency — which has gotten a lot of buzz in the media (including at Inman) and among the startup community–was one area of technology that most respondents did not want to see their leaders using more of. Just over 8 percent of respondents said they wanted to see leaders using more cryptocurrencies (only the category of “email” received fewer votes).

Jake Breen, an associate broker at Berkshire Hathaway HomeServices Utah Properties, said a common misstep among real estate firms is the tendency to spread resources across multiple trends and platforms, rather than focusing on one strategy and executing it with precision.

For years, his team has honed in on high-definition video, regularly producing tours, testimonials and market reports from an in-house studio with the help of a dedicated tech expert, and publishing the content across multiple platforms, he told Inman News late last month. He spends under an hour a day on the origination of data and content for his team’s daily videos.

The strategy for real estate leadership, he said, should be to identify the technology that best positions the company’s message in front of the consumer — and to hell with the rest of it.

“There’s so much noise out there,” said Breen, who serves as a broker advisor for REthink, a millennial think tank formed by Berkshire Hathaway HomeServices in 2013. “Leaders need to choose one or two of the top things that they know are working, or that they’ve seen work for other brokerages, and go all in. There’s so much noise out there. Do one, and do it really well.”

Zillow posts record $1B in revenue for 2017
by Andrea V. Brambila Feb 8