The all-important 10-year T-note at 1.92 percent today is flirting with the highs since the big drop in early August and has risen steadily since the September low. However, with the Fed on hold, we have little risk of the kind of big run upward that we saw last year.

Markets are already in pre-holiday quiet time. With each of this year’s holidays on Wednesdays, many people have punched out two weeks ahead.

Mortgages are still close to 4 percent, depending on the usual things like fees, terms and type. The all-important 10-year T-note at 1.92 percent today is flirting with the highs since the big drop in early August and has risen steadily since the September low. However, with the Fed on hold, we have little risk of the kind of big run upward that we saw last year. On Dec. 20, 2018, the 10-year traded at 2.81 percent. Give thanks this year!

Not all of it, just the market-sensitive stuff: November personal income and spending were on-trend, and the Personal Consumption Expenditure inflation series so important to the Fed stayed too low. “Core” inflation by that measure has risen 1.6 percent in the past year, way under the Fed’s 2 percent target, and Fed Chairman Jerome Powell has been very clear that the institution will not hike rates again until it sees “sustained” inflation above target.

Housing data gets a ton of ink, but nothing has changed. Building permits and new starts were up in November, but sales of existing homes were a little off forecast. The deep story will be with us for a long time: The migration of large numbers of people from the countryside to cities creates demand which can’t be satisfied by new construction without major and slow rezoning to higher density.

One result: Higher rents and an increase in high-income renters. Another: National stats that do not describe individual localities. In the countryside, excess supply and weak incomes and demand; in urban areas the reverse, not enough to sell.

Overseas data now matter almost as much as domestic U.S. news. The big rate drop during 2019 resulted from fear that external economies would be hurt by trade war, and with some delay then slow the U.S. economy. It’s early (shoot, it’s always early), but the damage is less than feared.

Japan, Europe and China each have their own internal non-trade issues, all weak, China is at greatest risk. Each is also trying to figure out how to help its  economy, each central bank is at or near the end of even non-traditional measures like buying bonds and negative interest rates. Thus there is no external source for revived inflation.

What is a “central bank?” The British economist and journalist Walter Bagehot (pronounced “bad-git”) circa 1875 had this great insight: The booms and busts that afflicted economies via banks that lost control of their balance sheets — and then broken banks — could be minimized if a central authority would provide credit when banks could not, but only against good collateral, which in a panic could not be sold.

Be careful: Conspiracy theories abound! Give yourself Lords of Finance, and wade through overlong personality discussions (a good way to avoid visiting family) to get to the juicy stuff of early central banking: World War I, gold, hyperinflation, The Depression and the political effects of getting money wrong.

The new one with China is not a meaningful deal, just a truce. China will continue everything it is doing, and U.S. tariffs will stay unpredictable. The re-do of the North American Trade Agreement (NAFTA) is not worth the trouble. To the hard-hearts in financial markets (they must be so, or find other work): The Obama administration got Obamacare done and nothing else, partisan but low key. The Trump administration got a tax cut and spending increase and nothing else, volcanic heat but also without result.

Bond investors make big money when bad things happen. When fear overtakes markets, global money runs to bonds for safety, especially government-guaranteed ones, which include most U.S. mortgages. Good news creates the risk of inflation, which eats away the value of interest payments and encourages the Fed to raise rates, which causes the market value of bonds to fall.

Our economy is healthy, and that’s certainly good news, but as noted above, both the Fed and data testify to little risk of inflation.

So, look at the bright side of dark: What’s the chance of some bad news which would take mortgage rates back down to the recurrent low near 3.5 percent?

Sorry, but bond traders everywhere will have to enjoy Christmas.

And on that note, nothing religious intended, only in the spirit of Dickens and redemption of soul: Merry Christmas!

The 10-year T-note in the past three years. Clearly recovering from trade-fright and no reason for a renewal of the 2018 Fed march to nowhere, 10s are just about neutral: 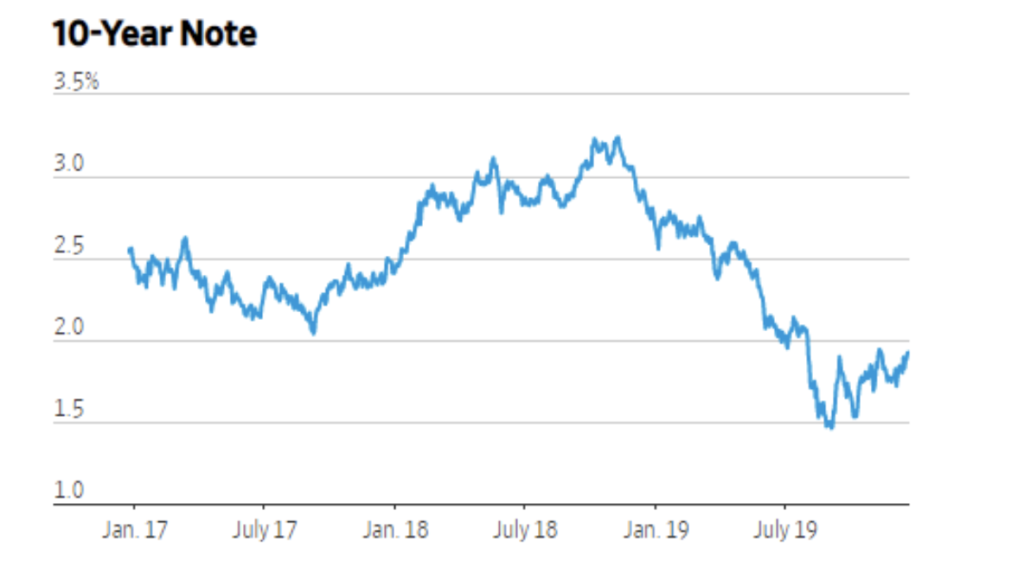 The Atlanta Fed — what a difference one month makes! No bad news here: 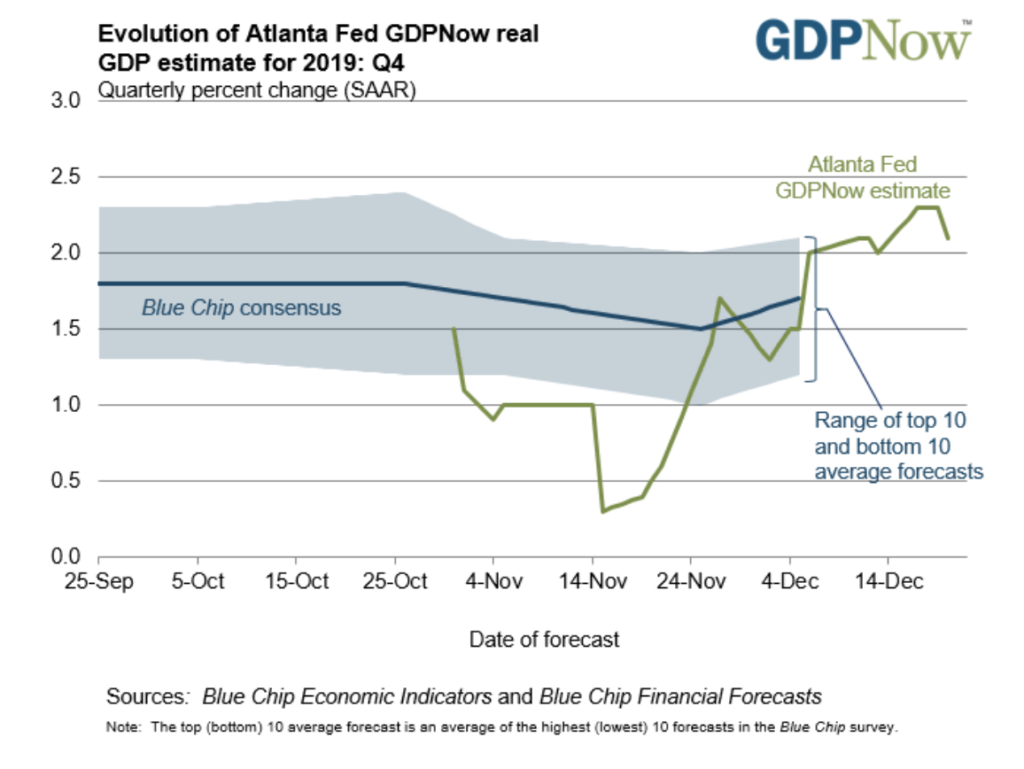