Side and Ted Irvine

Side CEO Guy Gal is having a banner year.

In March, his company — which offers back office services for agents who want to run their own companies without the hassle of a normal brokerage — raised $150 million and achieved a valuation over $1 billion. Three months later, the company said it had more than doubled that earlier valuation and that it was getting ready for a stock market debut. And this month, Gal told Inman the company was preparing to launch in 15 new states all at once.

It’s not a bad track record for a company that began less than five years ago.

To better understand Side’s meteoric rise and continued success, Inman recently chatted with Gal about pivotal moments that led him to where he is now. The conversation took place in advance of Inman Connect Las Vegas, where Gal will be taking the stage along with many other real estate industry luminaries.

Here’s what Gal had to say:

Gal’s first foray into real estate came about a decade ago, when he was living in Toronto. At the time, Gal didn’t know much about real estate and his main occupation was creating content for YouTube. But he needed somewhere to live and began working with an agent.

It did not go well.

Though Gal didn’t identify the agent or the agent’s brokerage by name, he said it was overall a negative experience. The agent “had been trained” to speak about the past success of the office and brand, but Gal found out much later that the agent was actually only working part time.

“They themselves did two deals a year,” Gal said.

The result was a lack of professionalism and knowledge. The deal was Gal’s first real engagement with real estate so he didn’t really know that there could be another way. But Gal said the whole experience left him with a bad impression of real estate and a kind of mental “stigma” against the profession.

About five years after Gal first bought a house, he had moved to California’s Bay Area and was working as a venture capitalist in residence at Matrix Partners, a company that has funded a number of successful startups including Postmates and Quora. The role involved identifying problems and figuring out how to build startups to solve those problems.

Around this same period, Gal set out to buy a home for the second time. But this time, Gal worked with a full-time, top-producing agent. The experience was night-and-day compared to what he went through before, however when Gal mentioned to the agent how happy he was, the agent’s response was surprising.

“I remember turning to the agent and saying, ‘The company you work for, the brokerage you work for, is so much better than this other brokerage when I did this other transaction years ago,'” he recalled. “And that agent became visibly frustrated that I was saying that.”

The problem, Gal soon learned, was that the agent had built his own path to success and was frustrated that his brokerage — which the agent felt had done comparatively little — was getting credit for the work he had done.

“That was an amazingly eye-opening thing for me,” Gal said. “It was very surprising and unexpected to learn that this was the relationship between agent and brokerage.”

Gal said the agent later went on to explore the possibility of starting his own brokerage. But in the end, the new firm never materialized.

“He decided not to go through with it; it was just too daunting,” Gal said. “He said, ‘Look, I want to own my own business, but I don’t want to operate my own brokerage.'”

The experience ultimately proved to be a turning point. Though Gal said he initially still carried some mental stigma toward real estate due to his first negative experience, he soon began meeting with other agents. That effort turned into an eight-month process during which time Gal and others working with him interviewed, shadowed and met with more than 20 agents. They ended up with more than 400 pages of notes.

“I realized, these are my people, they’re entrepreneurs,” Gal said. “That is where Side came from.”

The concept Gal ultimately hit on was to solve the problem that frustrated his own agent: To take the administrative and logistical roadblocks out of the process so top-producing agents could start their own companies while still focusing on what they do best.

About a year after Side began, Gal was having lunch with a friend in San Francisco. The friend was struggling to sell his house.

“He said, ‘I’m trying to sell my house on the Peninsula. I worked with an agent but they didn’t instill any confidence. Now I’m using Redfin. That hasn’t been really great either,'” Gal recalled of the conversation.

To help his friend, Gal offered to make an introduction.

“Let me introduce you to an agent who we work with, who lives where you do and where you want to sell,” Gal said. “And then you tell me what your experience is like.”

Gal made the introduction, then months went by and he mostly forgot about the matter. Finally, he met with his friend again.

“He walks into this coffee shop and he has this super excited look on his face,” Gal recalled. “And he said, ‘Man, Val [the agent] was so amazing to work with. I tried to tip her and she wouldn’t take it.’ And this was a guy who had said agents are stupid.”

Side already existed at that point, but Gal said the interaction was a major turning point. It boosted his confidence and banished any lingering doubts about Side’s viability. The rest was history. 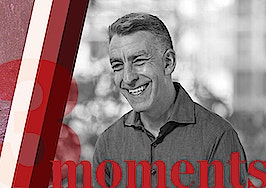 3 moments that shaped the career of Redfin CEO Glenn Kelman