The global media company reported $2.18 billion in revenue, up 3 percent from $2.12 billion the year prior, and a net loss of $66 million, an improvement over its $212 million loss the year prior. A one-time charge of $174 million due to the new U.S. tax legislation largely contributed to the company’s net loss.

Its revenue growth was driven largely by the company’s accelerating digital real estate services segment, which posted a 21 percent year-over-year increase of $50 million, and a 25 percent EBITDA (earnings before interest, taxes, depreciation and amortization) increase of $24 million.

Move revenue increased 18 percent to $110 million, up from $93 million a year ago. Meanwhile, traffic to realtor.com grew 14 percent year-over-year to over 50 million users, half of which came from mobile, the company noted. News Corp pointed to Move’s “ConnectionsSM for Buyers” lead generation technology as its primary growth driver.

“There is an ongoing drive to increase the profile of realtor.com as we have the highest consumer engagement and highest ROI for agents and brokers based on our latest metrics,” said News Corp Chief Executive Robert Thomson in the earnings conference call. “We’re also making a concerted push in the New York market with an emphasis on having the most extensive listings.”

This wasn’t the first time Thomson has commented on the company’s focus on the Big Apple. In News Corp’s first quarter fiscal year earnings call, the chief executive spoke of “taking advantage of the conflict between a lesser competitor and real estate companies,” alluding to the power struggle over New York listings between Zillow Group’s StreetEasy, the Real Estate Board of New York, and New York brokers.

Speaking to the company’s plans for innovating in the real estate space, Thomson said: “The realtor.com roadmap includes enhancements to our software and services products, which we believe provide best-in-class leads for brokers and the most comprehensive suite of essential tools.”

Thomson also referenced realtor.com’s new product “My Home,” released in August, “which extends usage beyond search and discovery and allows users to claim their home online,” he said. In competition with rival Zillow and its Zestimate offering, My Home offers up an estimated home value via an automated valuation model generated by CoreLogic, an AVM typically used by financial institutions. 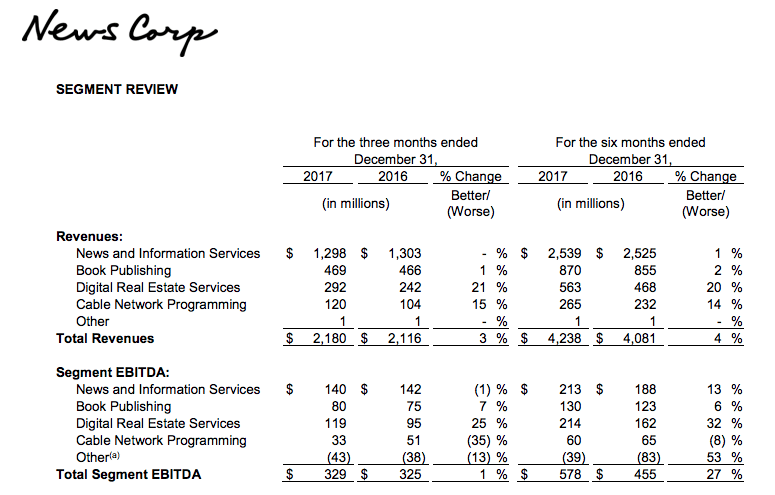