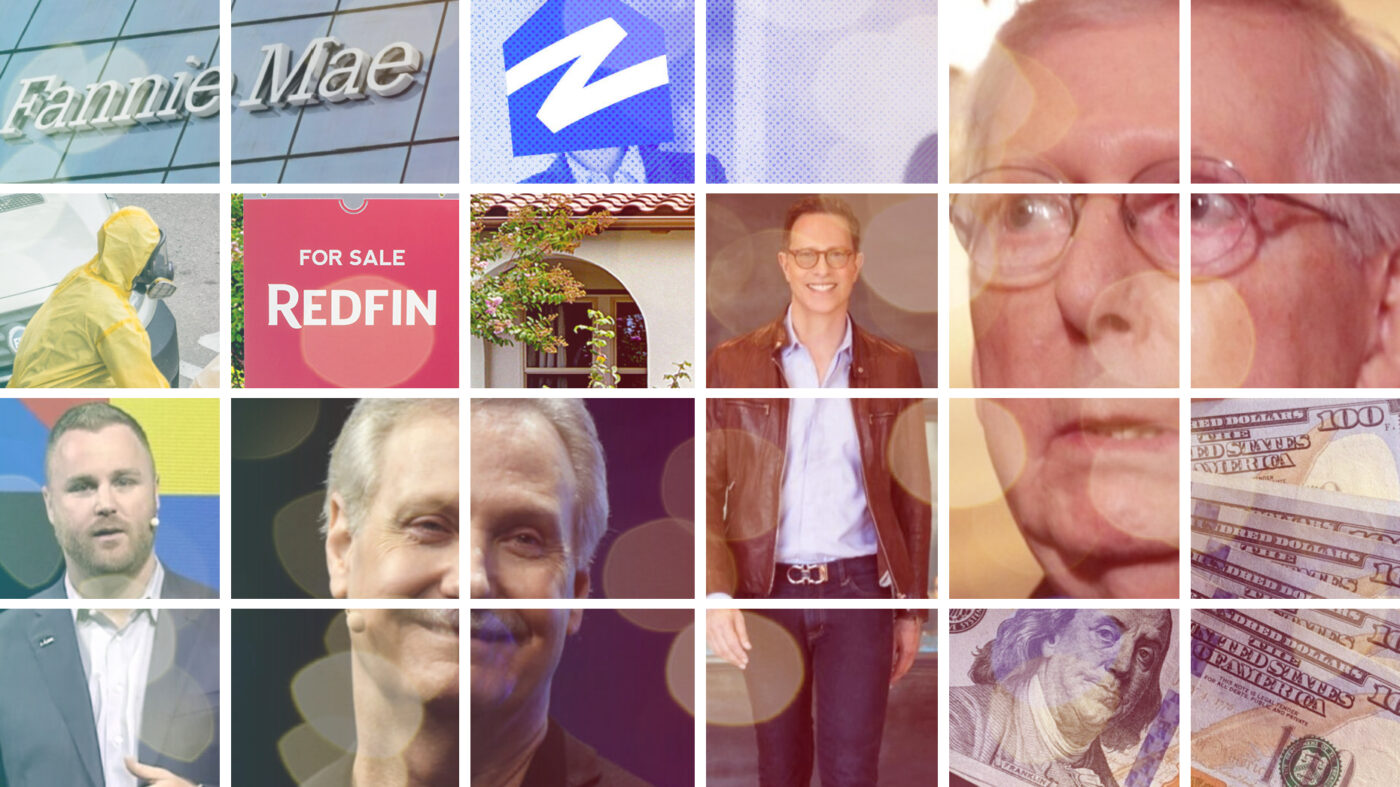 The past 12 months have been unlike any other period people living today have seen. Thanks to a global pandemic, economic chaos and a presidential election, 2020 has seen an onslaught of news that no one could have anticipated.

This news spanned the gamut, from tragic to uplifting, from frightening to novel. But overall the stories that Inman readers gravitated to this year tended to focus on big shifts. Several stories on plummeting interest rates, for example, were among Inman’s most-read in 2020. A handful of items on unexpected turns from Keller Williams also struck a cord. Politics, regulation and the National Association of Realtors (NAR) were popular topics this year as well.

And if there’s one takeaway here, it’s that in a year of big news the stories that most struck a cord were those about big changes in real estate.

With that said, here are the biggest stories from 2020:

Keller Williams acquired Smarter Agent in 2018 with the goal of building an end-to-end platform and completely revamping consumer search. But after two years, Keller Williams ultimately decided to throw in the towel. Read the story.

At the tail end of a year that featured intense debates about racism and discrimination in real estate, the NAR okayed a controversial new code of ethics governing agent behavior — even when that behavior isn’t related to work. Read the story.

Virginia-based Keller Williams Realty agent Lenora Farrington was hosting an open house in June when one visitor bludgeon her over the head more than 10 times with a crescent wrench. Read the story.

Amid widespread chaos in the real estate industry this spring, realtor.com let go of more than 100 employees. The layoffs were prompted both by COVID-19 and a broader restructuring. Read the story.

In 2008, actor Robin Williams bought a home with sweeping views of the San Francisco Bay. It then hit the market for $7.25 million in 2019, before dropping down to $5.955 million. The home finally sold this fall. Read the story.

15. Zillow to hire agents as employees for iBuyer transactions

In a shift from the way Zillow has managed transactions since launching its cash offers program, the company announced in September that beginning next year iBuyer customers in Georgia and Arizona will work directly with a Zillow employee. Read the story.

The U.S. was just days into its coronavirus outbreak in March when mortgage rates hit their lowest point in 50 years — triggering advice that consumers needed to act fast. Read the story.

Falling mortgage rates dominated the early days of the pandemic, and by late April experts at Fannie Mae were indicating rates would stay extremely low through next year. Read the story.

Compass ultimately parted ways with agent Gary Wat after the company said he held showings for a home in Altadena, California, where the sellers had allegedly contracted COVID-19. Read the story.

11. Gary Keller steps back from CEO role in massive leadership shuffle at KW

Gary Keller is a towering figure in the real estate industry, but in October his company announced that he would now transition into the role of executive chairman of the newly created holding company KWx. Read the story.

In a move meant to reward company loyalists, Keller Williams announced last winter that associates who joined the firm after April 1 and then later jump ship to a competitor will no longer be able to receive profit shares from the company’s lifelong revenue program. Read the story.

Seth Campbell owned multiple massively successful Keller Williams market centers and an expansion network that spanned the country. But in July the company was in the process of ending Campbell’s affiliation with Keller Williams after a months-long investigation into multiple allegations of sexual harassment. Read the story.

Steve Frankel joined Compass right as 2020 was beginning, but quickly returned to his prior home at Coldwell Banker, citing the “parallel values” he shares with the company. Read the story.

7. Stimulus package likely to include unemployment for agents

The first U.S. stimulus package of the coronavirus pandemic delivered $2 trillion in aid, including checks to every American and unprecedented unemployment benefits to contract workers such as real estate agents. Read the story.

Real estate had a rough late winter and early spring, but the one bright spot for consumers and their agents was falling mortgage rates. By early March rates were down to 3.29 percent, and the drop likely helped the housing market quickly rebound in the ensuing months. Read the story.

5. Redfin is furloughing 41% of its real estate agents

Along with other companies, Redfin suffered through the early spring, furloughing nearly 600 agents and laying off 7 percent of its workforce. The furloughs were supposed to last until September, though a rebounding market prompted Redfin to begin bringing back agents sooner. Read the story.

The U.S. Department of Justice surprised the real estate world in November when it revealed a lawsuit against, and a settlement with, NAR over what it said were various illegal restraints on competition. Read the story.

3. These 10 housing markets are poised for serious trouble

The pandemic prompted a widespread shift in priorities among real estate consumers, and as the fallout became more clear a study by GoBankingRates suggested some cities, such as those in California’s Bay Area, could have a harder time than most in the future. Read the story.

Rates were already falling in March, but by April the average interest rate for 30-year, fixed-rate mortgages dropped to 3.45 percent — the lowest it had ever been in the history of the Mortgage Bankers Association’s 30-year-old weekly survey. Read the story.

Though it wasn’t clear during the early months of the pandemic what 2020 would have in store for agents, by the summer low rates and shifting consumer preferences were fueling intense bidding wars across the U.S. Boston, San Diego and Salt Lake City were all bidding war hot spots by July. Read the story.

Will 2021 be the death of the office? These professionals say 'no way'

Here's the real estate tech worth knowing in 2021

What agents need to know about energy-efficient lightbulbs

Sponsored Content
Agents: Here’s how to make yourself (and your business) more profitable

Sponsored Content
Vibrant and connected communities are a top priority for today’s homebuyers
Back to top
We're giving away 3 free ICLV tickets at Connect Now next week. Register and attend live for your chance to win!REGISTER×
Inmanpot
Log in
If you created your account with Google or Facebook
Don't have an account?
Create an Account
Forgot your password?
No Problem