Although homebuyers constantly hunt down properties online, they’re much less likely to use websites to find real estate agents. Most buyers track down agents through personal connections, hiring licensed friends or family members or using professionals they’re referred to by people they trust.

Although homebuyers constantly hunt down properties online, they’re much less likely to use websites to find real estate agents.

Most buyers track down agents through personal connections, hiring licensed friends or family members or using professionals they’re referred to by people they trust.

LinkedIn’s ProFinder, a platform that lets consumers request proposals from service providers, may have just introduced the missing ingredient to online agent matching by pairing homebuyers and sellers with agents based largely on their direct or indirect connections.

The matching technique relies on LinkedIn’s trove of user data on hundreds of millions of professionals and might not be something other agent-search tools can replicate due to LinkedIn’s tight control of that data.

Vaibhav Goel, the LinkedIn product manager overseeing ProFinder, said he’s learned from conversations with agents that they sometimes spend up to 50 percent of their revenue on generating new business.

“What better way to digitize the referral process…than through a platform like LinkedIn?” he asks. (ProFinder currently doesn’t charge agents for leads, but it potentially could in the future.)

LinkedIn is still piloting ProFinder, and the referral tool currently can only connect consumers with agents in major cities, such as San Francisco, New York, Seattle, Washington, D.C., and Dallas, Texas.

But once LinkedIn irons out the kinks, the plan is to make ProFinder available everywhere. That seems doable, considering LinkedIn has more than 128 million registered American users.

Consumers who search for agents on ProFinder must specify whether they’re buying or selling, what type of property they’re after, their price range and location and some details on their needs and situation. 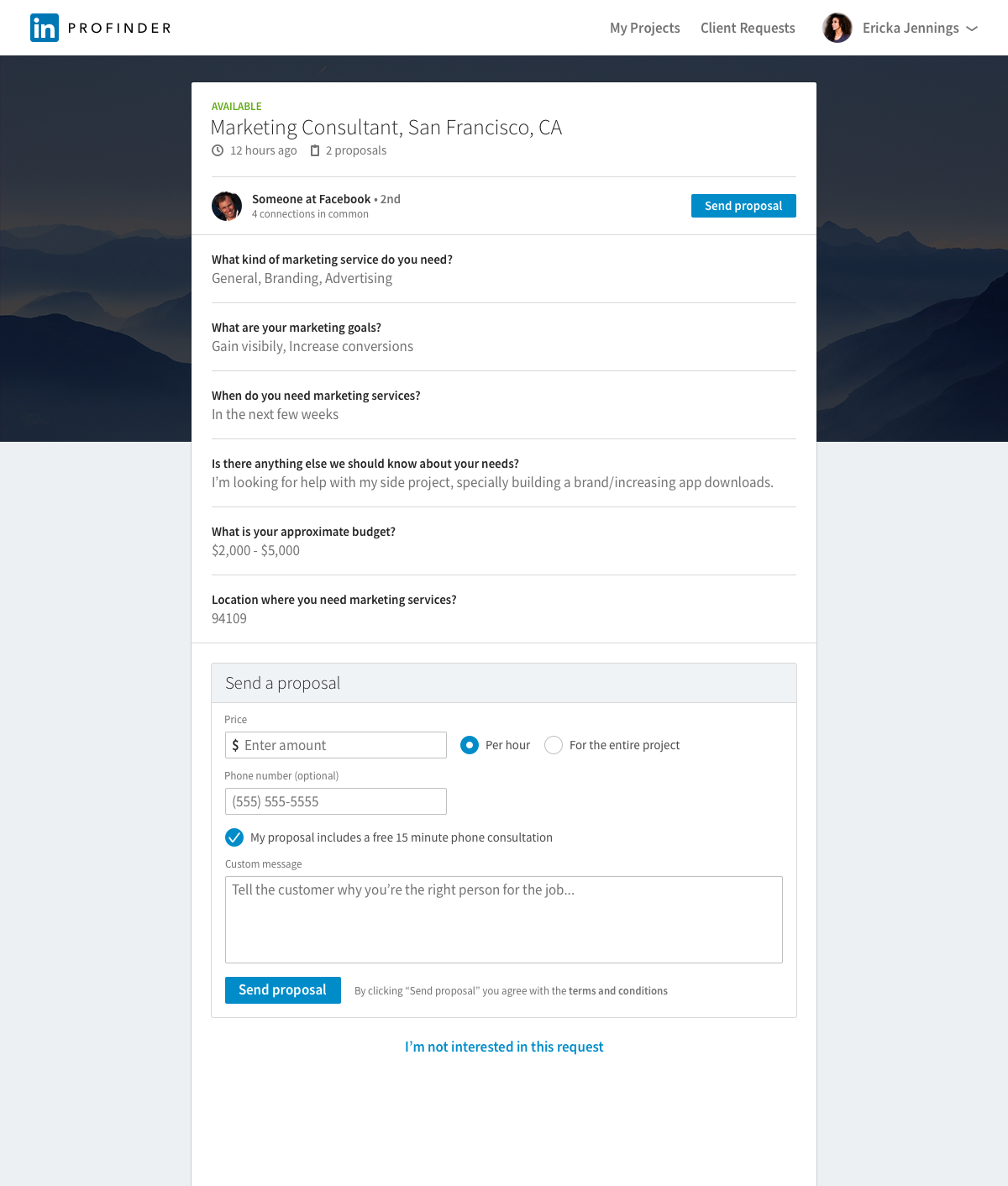 LinkedIn then matches agents from its ProFinder network with the consumer based on how connected they are with the consumer through LinkedIn, agents’ profile recommendations and endorsements, and how often agents publish posts on LinkedIn.

Agents invited by ProFinder to submit proposals to prospective buyers and sellers must only send a message and contact information. Unlike other types of ProFinder service providers, agents don’t need to include a price quote because, in real estate, “pricing is pretty fixed,” Goel said.

LinkedIn won’t “cap the number of agents on the network as long as any new agents interested in joining represent…high-caliber” professionals,” Goel said. The more recommendations, endorsements and posts an agent has, the more likely they are to receive invitations to submit proposals.

Consumers can receive up to five proposals from ProFinder agents. Each shows how the consumer is connected to the agent through LinkedIn, along with the agent’s message and contact information.

Buyers and sellers might learn they know the agent, share a mutual contact, attended the same school or worked for the same employer. After reviewing a proposal, it’s an easy step to reach out to a shared contact to ask whether an agent passes muster. 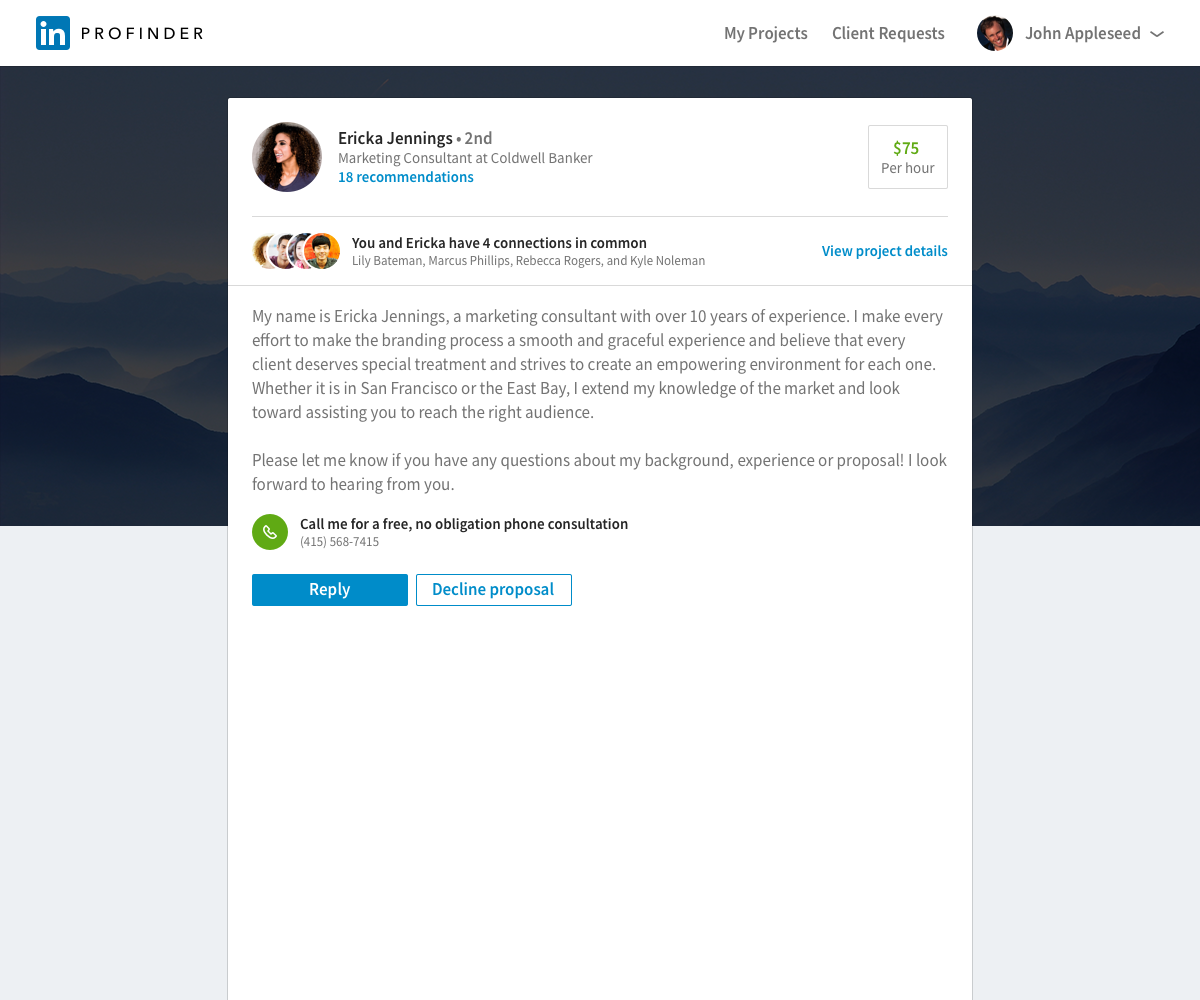 By simulating — perhaps even energizing — the traditional agent referral process, ProFinder offers a sharp edge over competitors, none of which seem to use social media connections to match or directly present agents to consumers at scale. 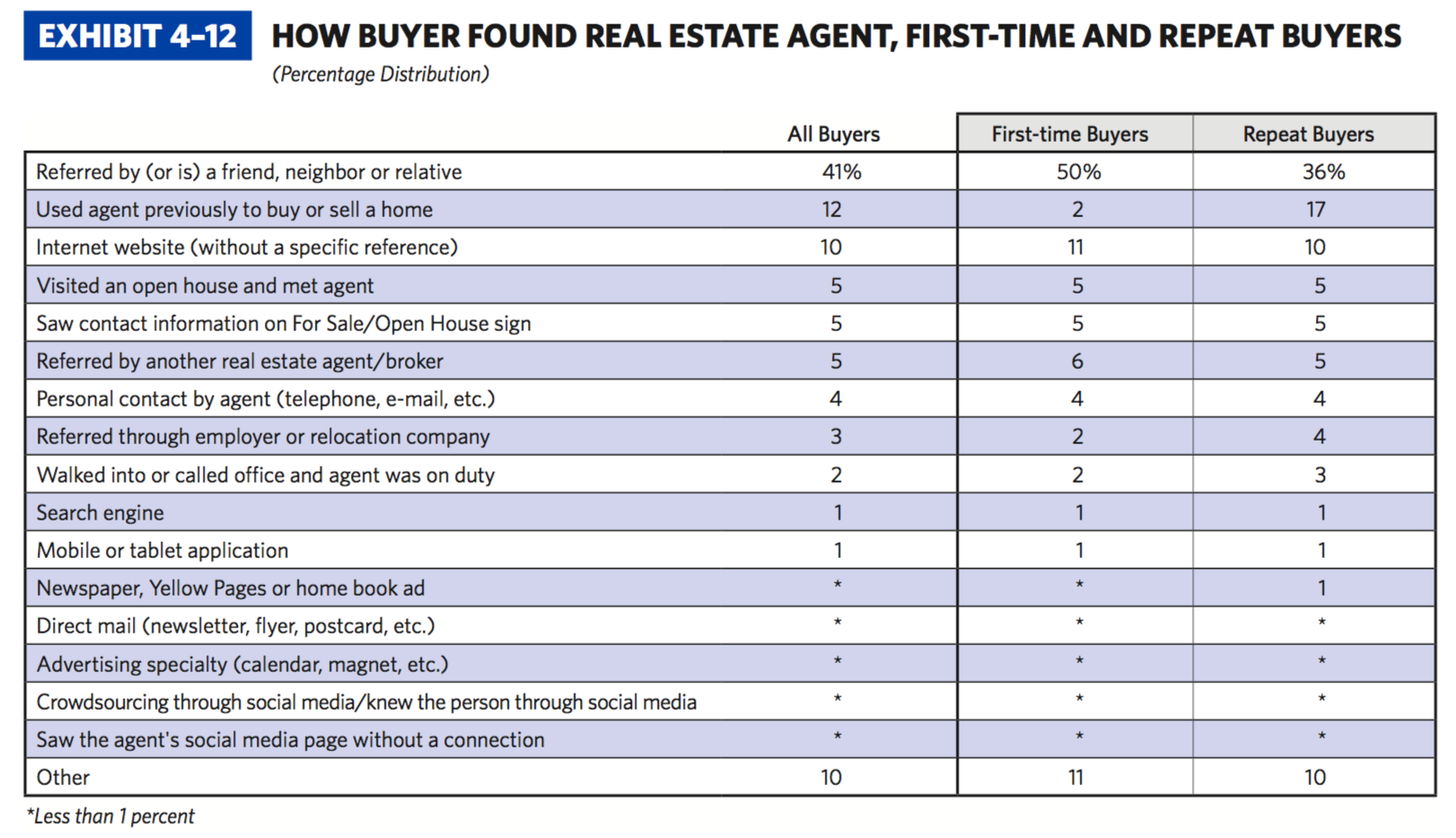 Because LinkedIn can process and surface connections between consumers and agents, prospective buyers and sellers who use ProFinder can potentially get a fuller picture of the agents they know or could vet through peers than they might by seeking referrals through haphazard outreach to friends or racking their brains for agents they know.

ProFinder screens leads before feeding them to agents by comparing their LinkedIn user data to their stated buying or selling preferences and even contacting them directly if things seem fishy.

LinkedIn is “90 percent accurate in assessing whether this person is really looking or not,” Goel said. “If it looks suspicious, we call that person up…”

One downside to ProFinder is that agent profiles, like all LinkedIn profiles, don’t include reviews. They only show endorsements and testimonials, which would be less likely to call attention to potential shortcomings than reviews.

But that looks like less of a weakness when you consider that reviews on existing agent-search sites are almost always testimonials anyway. (Try finding agents who’ve received ratings on Zillow, Trulia or realtor.com that average less than 4.5 out of 5 stars.)

ProFinder’s lack of performance statistics might be a bigger weakness.

Agent-matching services like Agent Ace (operated by OpenHouse) and HomeLight use such data to match consumers with top-performing agents, while the same data often enriches Zillow, Trulia and realtor.com agent profiles.

Yet offering access to an agent’s transaction volume or number of active listings — or baking that into an agent-matching algorithm — apparently hasn’t done much to spur many more consumers to find agents online.

Incorporating multiple referral pathways — perhaps only one of which might have been traveled down in a traditional search — into a buyer or seller’s agent search experience might imbue agent-matching tools with considerably more appeal. 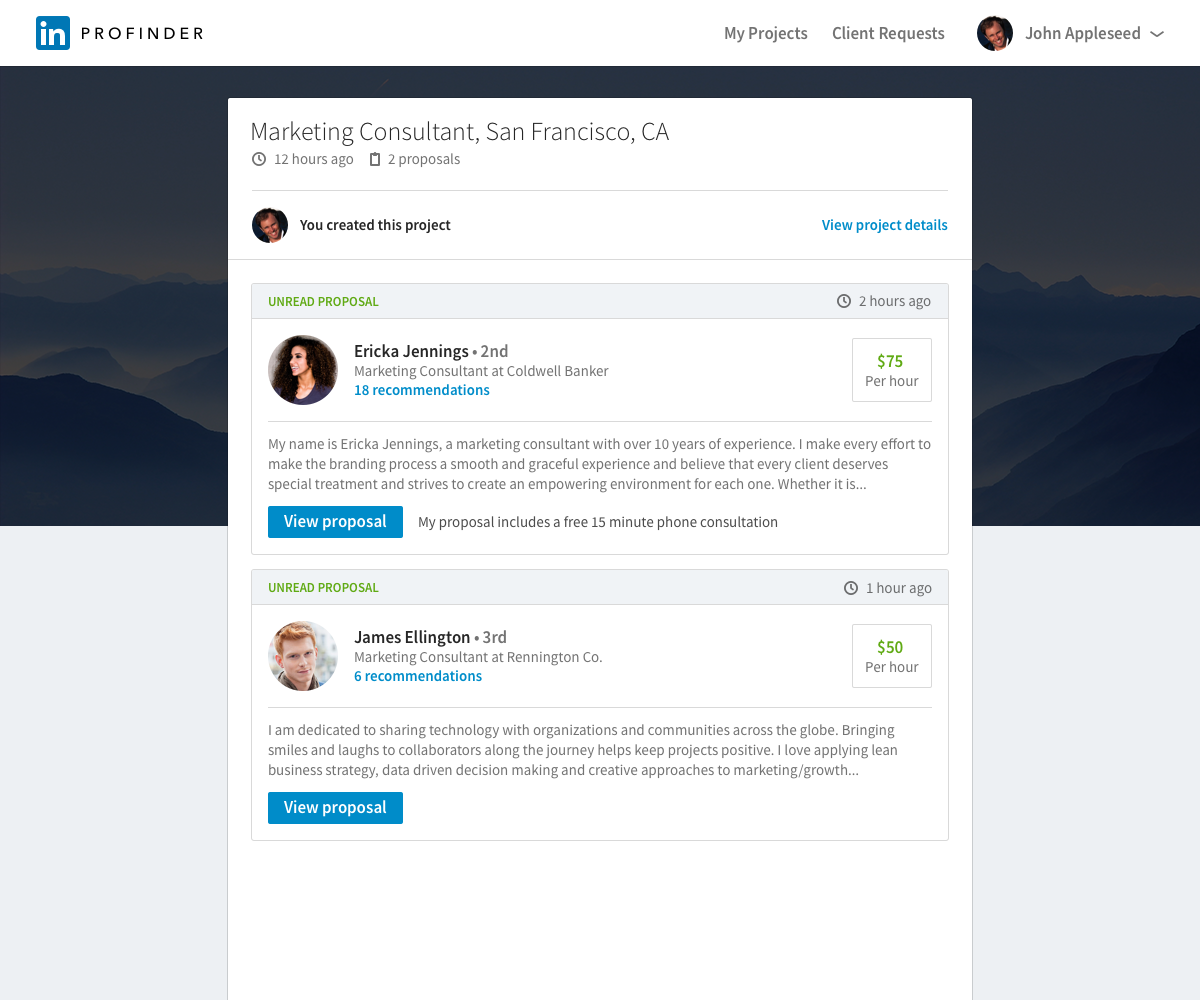 Trulia once showed consumers using its agent-search tool if their Facebook friends had “endorsed” agents. But the listing portal has since scrapped that feature. Amanda Woolley, a spokeswoman for Zillow Group, which operates Zillow and Trulia, didn’t immediately respond when asked why.

Even if Trulia had left that feature intact, indicating when friends have used a relatively obscure Facebook feature to promote an agent is much different than showing whether a consumer is connected in any way to an agent through a social network.

Christie Farrell, a spokeswoman for realtor.com-operator Move, said realtor.com’s agent-search tool also once had a feature that utilized social media data, but has since removed it. She didn’t respond when asked why and if the feature showed shared connections between agents and users, rather than some other type of social media data.

UpNest, which lets homebuyer and sellers solicit bids from agents, features links in proposals that users can click to see their connections with an agent on LinkedIn.

But the site’s matching process doesn’t take social media connections between agents and the consumer into account, and viewing connections requires separately visiting LinkedIn profiles. ProFinder, on the other hand, pairs consumers with agents based on LinkedIn connections and highlights those connections on proposal pages.

The Real Estate Agent Directory, a Facebook search tool and app with 456,000 agent listings, can show some users the connections they share with agents.

But the feature, which is still in the process of being rolled out, is only available to agents using the directory’s search tool, not consumers. And an agent can only see the contacts she shares with another agent if both agents have profiles on the directory and both have given permission to the directory to access their friend lists.

One reason why listing portals haven’t integrated social media connection data into their agent search tools could be that doing so might divert some users away from the profiles of agent advertisers — who often achieve high visibility on listing portals by accumulating many reviews — to the profiles of agents who aren’t advertisers, said Max Diez, who used to be managing broker of UpNest before recently joining online brokerage Movoto.

Agent-search tools also might not fully utilize LinkedIn connection data because the social media site restricted developers’ access to it about a year ago — perhaps, in part, because the social network wanted to be uniquely capable of fielding services like ProFinder.

However, agent-search tools should be capable of tapping Facebook’s “Graph API” to at least show buyers or sellers what agents they’re connected to directly or indirectly, if not allow them to filter for agents based on those connections.

Is Zillow thinking of doing this?

Should Zillow graft Facebook connections onto its search tool, the listing portal might spur more consumers to hunt for agents online. But even then, the feature would highlight connections for agents and consumers only if both parties had registered on Zillow with their Facebook accounts.

On the other hand, consumers who use ProFinder are supposed to be able to count on always getting matched with agents they’re connected with, whether that’s directly or through a contact.

5 critical mistakes that could blow your big media moment