Agents want support and tech tools. Brokers want some guarantee of loyalty. Everyone wants more sales. Are brokerages throwing money at the right resources to keep this delicate dance from coming to an awkward halt?

Are brokerages throwing money at the right resources to keep this delicate dance from coming to an awkward halt?

Researchers at Contactually, a web-based CRM tool, set out to uncover the typical hierarchy of brokerage business priorities, and between October and December 2015, it interviewed 120 broker-owners and senior leaders at leading firms in the U.S. and Canada.

Through these conversations, a potential disconnect emerged between broker investments and the agent activities that generate the most business.

Two sides of the same coin

At a high level, Contactually’s research report outlines two evergreen areas of emphasis at the majority of brokerages:

First and foremost, 96 percent of brokerages put a big bright star on agent recruitment/retention and expend “considerable time and energy toward attracting new and experienced agents to their firms.”

This is especially true when “market conditions are healthy,” the report said, and as one broker commented, “I’ve never met a problem that recruiting can’t solve.”

Most brokerages favor recruiting as a main growth method because it’s a lever they have total control over (targeting new agents and convincing them to join), and it’s directly measurable.

According to the report, the “more progressive” broker-owners see recruiting and retention as “two sides of the same coin” because those competing in the same geographically areas have to recruit existing agents 365 days a year to prove their firm is the best.

The second most common priority among broker-owners is agent productivity, with 60 percent viewing production levels as a key growth driver. (One-hundred-percent commission models, which make money primarily through agent fees, made up the lion’s share of brokerages that didn’t elevate productivity to the high priority list.)

Under that productivity umbrella are two main investment buckets: training and technology.

The vast majority of brokerages keep their training in-house (with the exception of sales education, which agents often have to opt-in and pay for on their own, based on the researchers’ anecdotal evidence) with contracts and risk management/compliance reported as the most common training topics. 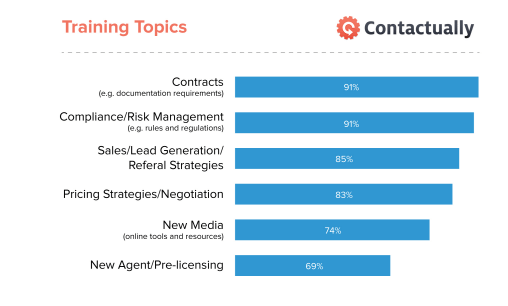 At larger firms, training is more official, so to speak (with coaches, full-time trainers and budgets) whereas at smaller and mid-sized firms, training responsibility is spread across senior team members.

Under that productivity umbrella are two main investment buckets: training and technology.

Brokerage training priorities were reflected in their tech investment decisions. In other words, the most commonly provided software services are those that help agents oversee and deliver a compliant, risk-free, airtight transaction.

“Top of the funnel” technologies such as marketing/website/graphics (76 percent) followed closely behind. 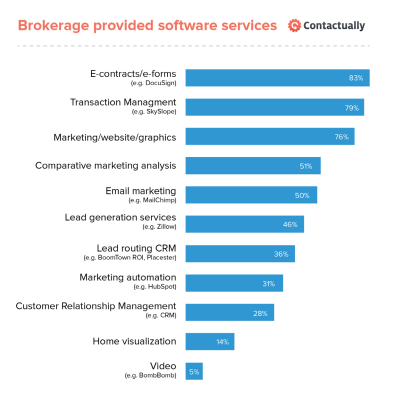 Overall, is spending in the tech arena going up or down?

The research showed that 41 percent of brokerages plan to increase software spending over the next 12 months, 56 percent expect the investment to stay the same, while only 3 percent anticipate a tech budget diet.

Do brokerages underinvest in tools that support sphere of influence marketing?

Looking at the main sources of agent sales volume and the types of tech brokerages prioritize, Contactually does some dot-connecting.

(These numbers are in the same ballpark as those reported in the National Association of Realtors’ 2016 Profile of Real Estate Firms, released yesterday.)

So why, then, are brokerages more likely to offer marketing/website/graphic support than those technologies that assist agents in keeping track and staying in touch with their network?

That’s the question that Contactually (as a CRM provider) poses, suggesting it’s likely that brokers and agents alike could be underinvesting in the most lucrative marketing support systems.

A post by WAV Group’s Victor Lund elaborates on this viewpoint, and offers a criticism of the online (portal) lead generation approach.

“Given that the highest percentage of sales are the result of referrals and repeat business, it makes better business sense for brokers and agents to spend the bulk of their marketing dollars maintaining consistent touch-points with clients throughout their consumer lifecycle,” Lund writes.

“Yet, brokers are under-investing in growth-oriented technologies that can advance the most profitable customer-for-life relationships.

“While individual agents may pay out of their own pocket to access customer relationship management (CRM) technologies, only 28 percent of brokerages provide this tool.

“So, instead of prioritizing marketing investments toward relationship-building, brokers are losing a valuable opportunity for increasing sales by gambling on lead generation through portal outreach.

Real estate ad spending has spiked over the last decade, according to an Inman report from July, thanks to the dawn (and rise) of digital marketing. Total spending between 2005 and 2015 increased from $8.39 billion to $13.86 billion, a 65 percent increase.

But is the money spent here usually a lost cause?

Those who’ve found success say that it’s all about your strategy and systems; operational support, including support staff, training and content development, and long-term marketing to leads are crucial to squeezing the value out of digital ad efforts.

Minnesota-based Realtor Brandon Doyle explained that digital marketing’s main attraction is its potential to help real estate pros acquire leads beyond “their sphere of influence” with speed. In other words, referrals and repeat business start as leads and later become gifts that keep on giving.

Contactually notes, however, that investments in lead-gen and websites are stilled aimed at a “significantly smaller source” of the revenue pie.

In one interview, a broker spoke of those impressed by all that glitters: “Leads are the bright shiny objects that hold such promise and capture our attention. Yet, we would all be better off focusing our efforts on extracting more value from our existing networks.” 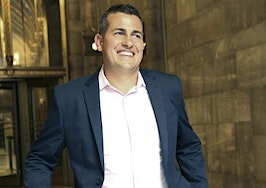 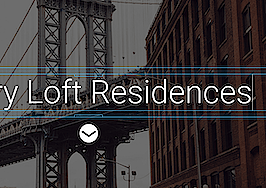 9 tips to crush the competition with your listing website 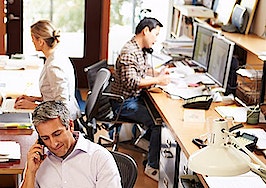 4 things you need to know about running a modern brokerage