The launch of Amazon Sumerian, a new virtual reality (VR) and augmented reality (AR) tool, could help push the technology further into the mainstream, sending ripples across the real estate industry.

The launch of Amazon Sumerian, a new virtual reality (VR) and augmented reality (AR) tool, could help push the technology further into the mainstream, sending ripples across the real estate industry.

Sumerian allows users to design immersive VR, AR and 3-D environments for any browser that supports WebGL or WebVR graphics rendering, including Daydream, HTC Vive, Oculus Rift and iOS mobile devices, according to a release from Amazon.

Users of Sumerian won’t need to be experts around a code terminal, but they’ll still have to know how to leverage “drag-and-drop” functions and be able to script the experience to their liking, explained Jack Donovan, a software engineer with Irisvr, whose product allows architects and construction workers to automatically generate a VR experience of what they’re building without coding knowledge.

Sumerian is currently available only to Amazon Web Services customers on an invite-only basis. There’s no software or installation fees, just a cost associated with storage used for 3-D assets and traffic volume generated from access to the virtual scenes. 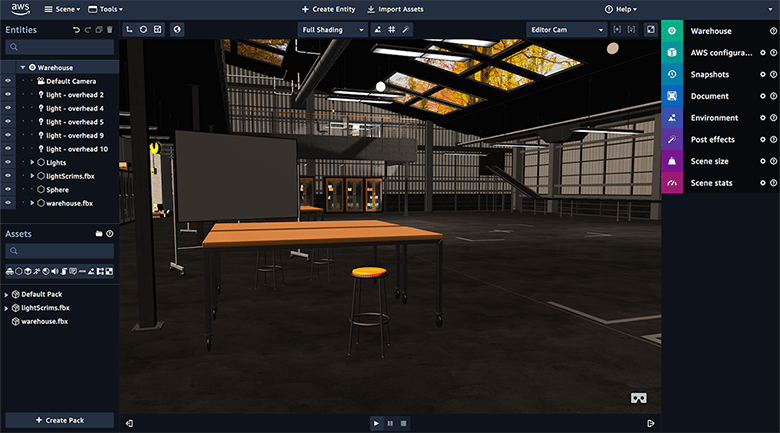 Could Sumerian be the ‘WordPress of VR?’

According to Amazon, Sumerian users can choose from pre-built libraries to drop objects into scenes; download and import items from third-party asset repositories such as Sketchfab or Turbosquid; or create and import their own objects.

“I hope that it will be simple enough for people to pick up, but the fact of the matter is, you still have to learn something,” Donovan said. “Even if you’re not writing code, it’s a new platform that you’re learning, and it’s separate from coding that instead of learning coding and being able to apply it anywhere, you’re learning Sumerian and being able to apply it to Sumerian.”

He added, “So I think the question is: Is Sumerian the WordPress of VR/AR or is it the GeoCities of VR/AR?”

While the product is targeted an array of industries, for use in employee education, training simulations, retail and sales and field service productivity, Amazon does mention remote building tours in its product summary. Donovan thinks it could become a powerful real estate tool in the right hands.

“I think that maybe it’s poised to see more use in that industry than others just because there’s a high value placed on experience and ‘wow’ factor,” he explained. “For people willing to throw down a lot of money on [a] new investment, they’ll be more convinced by something that’s realistic, true to scale and interactive.”

The future of AR and VR in real estate

3-D and other types of virtual tours are already fairly widespread in the real estate industry and continue to gain traction (in October Zillow announced the details of its 3-D tour creation app, to be rolled out nationwide in 2018, while GeoCV is focused on designing 3-D home tour apps for smartphones).

Virtual reality remains a fringe benefit for homesellers and is likely years away from becoming mainstream — or a threat to real estate agents — as most homebuyers still want to see a property in person before committing to it.

“For [VR] to be good enough to completely replace a real life demo instead of supplementing it, it would have to be a really good and really realistic,” Donovan said. “That’s the sort of thing you can focus on if you’re a VR developer, not just a Sumerian user.”

Nevertheless this year companies such as Matterport, a virtual tour giant, and Planitar made strides in offering VR tour technology to the industry with updates allowing home hunters to saunter around properties via VR headsets. Practically speaking it appears to be valuable for out-of-town buyers, luxury properties and agents looking to attract attention to a listing with special marketing.

Meanwhile AR — which overlays information on top of the real world and is available through mobile devices — seems to have more of an industry foothold at the moment. It picked up steam in September when Apple released its iOS11 ARkit, a framework for developers to create augmented reality experiences for iPads and iPhones, prompting a slew of real estate apps to roll out new AR features.

Will Sumerian, backed by a household name and aiming to become a simpler, DIY VR/AR solution for the masses, push mixed reality further into real estate’s repertoire?

Despite Sumerian still being in its early stages, Donovan believes the philosophy around what it can offer is going to become more pervasive in the coming years as its attainability increases.

“For some reason, the [VR] medium inspires a lot of personal ideas,” he said. “So a tool that enables people to execute their ideas without a tremendous amount of learning, I think that’s going to be huge and potentially game changing for the VR content world.”