The plight of Arizona homeowners after the 2008 real estate crash is the parodied subject of a new movie starring comedian and actor Danny McBride.

Arizona premiered at the Sundance Film Festival in early 2018, billed as a dark comedy laced with elements of an action caper, and opens in theaters across the U.S. and video-on-demand August 24.

The official trailer was released this week (watch below). It features violence against real estate brokers and agents played for both comedic and dramatic effect, and some of them get in their own hits against their attackers.

Violence against real estate agents is a very real problem, claiming lives and shattering families and communities, so the studio, RJLE Films, might want to ready itself for negative industry feedback.

The preview opens with a series of establishing shots in Harding, Arizona, depicting foreclosure and short sale signs, and McBride’s voiceover asking, “What? They teach a seminar to you guys, just how to lie to people?”

McBride plays “Sonny,” a disgruntled homeowner who violently confronts a real estate agent in response to his home’s collapsing value. Rosemarie DeWitt’s “Cassie” is the struggling, emotionally underwater agent of Bartka Realty fighting to keep a career afloat amidst the financial turmoil that sank an entire economy a decade ago. Her yard sign reads, “Go Classy With Cassie.”

After her boss’s demise, she becomes a part of Sonny’s terribly laid-out plans to cover up the killing.

The trailer certainly hits on the darker points of the film, like Cassie’s witnessing of her boss’s murder and a punch to the face during an apparent kidnapping, but it certainly doesn’t skimp on McBride’s brand of blatant, bulldozer-like punchlines either.

The audience is given little reason to like Sonny. The trailer depicts him as an amalgamation of every horror story told about starry-eyed homeowners building shaky suburban empires on disintegrating foundations of invisible home equity. That, and he’s a murderer.

Cassie becomes engulfed in Sonny’s ongoing, bungling attempts to cover his tracks. And like the housing crisis itself, it looks as if things get much worse before they even come close to improving for the agent.

The film is the directorial debut of Jonathan Watson, who worked with McBride on HBO’s Vice Principals. Luke Wilson makes an appearance, as does Caitlin Olsen of It’s Always Sunny in Philadelphia.

Is the next housing market downturn on the horizon? 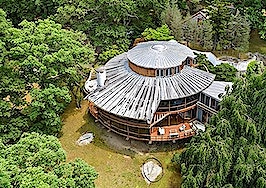