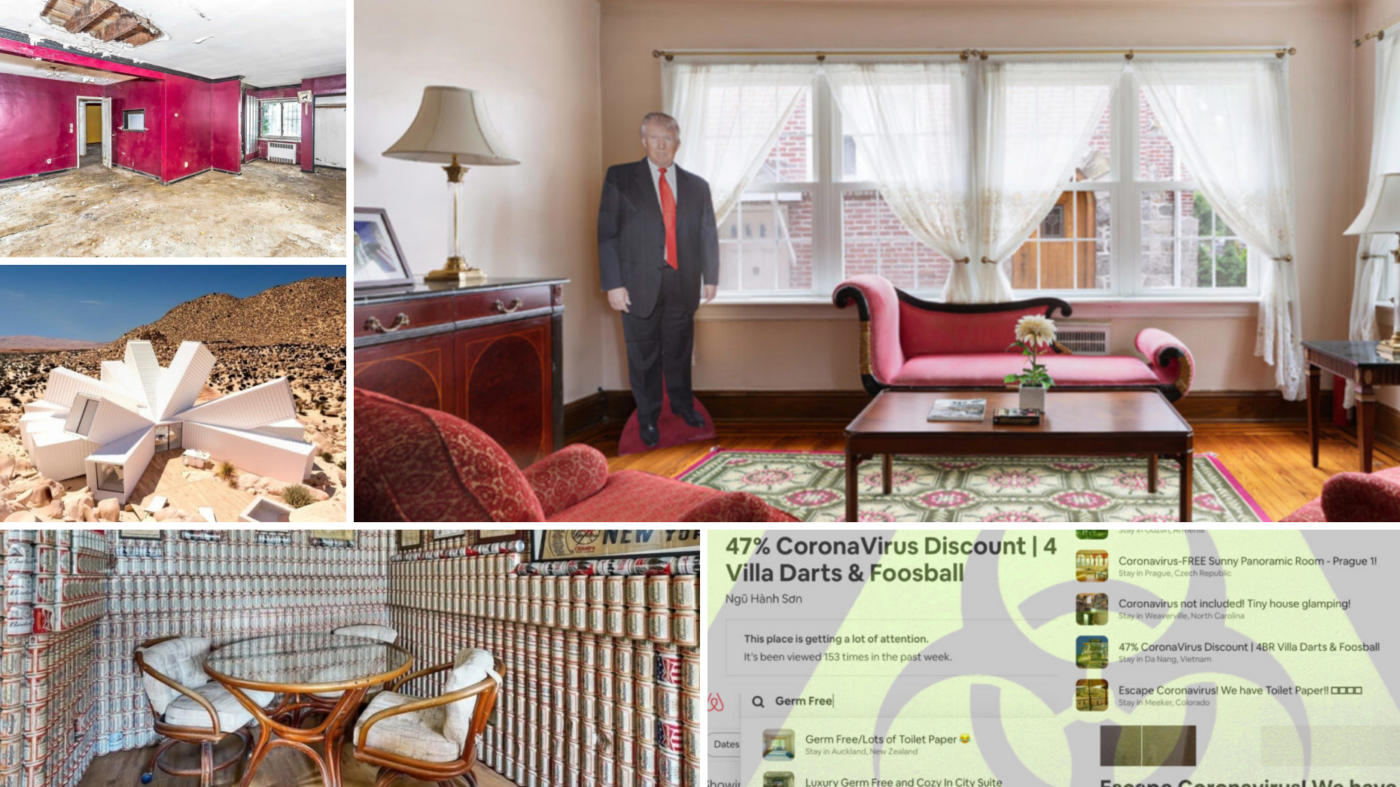 It’s been a wild year full of wild listings.

From a home deemed “too dangerous to enter” to a condo lined with Budweiser cans and a home made entirely out of shipping crates in the California desert, there was no shortage of unique properties to hit the market this year.

Some, like the listings that incorrectly advertised properties as a “coronavirus-free” place to stay, were a sign of the times. Others had been on and off the market for years before being adjusted for price and finally selling.

Below, some of the weirdest, oddest and most memorable homes to hit the market between January and December.

The year started off with a very odd listing indeed when Phil McGraw, who is better known as the popular TV psychologist Dr. Phil, listed a home full of oddities and artifacts for $5.75 million.

Twitter went wild for the giant staircase made up of wooden vines, the rabbit and bear figurines as well as the gun and rifle wall display that Dr. Phil’s spokesperson had called “an anti-gun art installation where the useless guns are melted.”

Too dangerous to sell

There are inventory shortages and then there is a house deemed “too dangerous to enter” being placed on the market anyway and getting dozens of offers.

That is precisely what happened when the owners of a home in Bothell, Washington, listed a gutted and trash-filled property. Its proximity to Seattle attracted investors willing to raze and rebuild amid the city’s steep housing market.

A bright pink California mansion that looks like it came straight out of a 1980s mafia movie was listed for $5.99 million in February.

The seven-bedroom, 14-bathroom estate was built in 1989 and is a time capsule to the popular design style of the time: a pink roof, mirrored walls, neon lights and a waterfall built into a stone facade. Finding a buyer has proven more difficult, however, as the house is still on the market.

In the early days of the coronavirus pandemic, some homeowners started trying to attract renters by billing their homes as “coronavirus-free” and advertising them as “safe houses” where people could quarantine.

While the course of the pandemic later exposed many such listings as incorrect or downright scams, their appearance showed just what people can do to draw attention to  listing in a short-term rental market driven by a pandemic and tight travel restrictions.

A home that was built at the height of 1980s Cold War received new interest when it was listed for $30 million in 2020. As the coronavirus broke out in the United States and wealthy people looked for places to “wait out” the pandemic, the agents touted its most distinguishing feature: an underground bunker that can only be accessed by diving through its pool and was designed to serve as a hideout in the case of a nuclear war attack.

Whether it would work is doubtful as listing agent Jason Oppenheim said nobody has actually tried to access it for years.

The listing agents touted it as a prime “investment opportunity” because the location of Fresh Meadows is home to some of the best public schools in the city. It later sold for $720,000, most likely to be razed.

The oldest home (for sale) in the country

In March, a 380-year-old Massachusetts house once owned by prominent New England army colonel John Barstow came on the market for $669,900.

The original structure was built in 1640; Barstow later bought and expanded it for his wife and nine children with more Colonial features in 1792. Despite being dubbed the “oldest home for sale in the U.S.,” the property has not been designated as a public landmark and could technically be razed or renovated by a new owner.

Starship rooms and a talking alien

A home with interiors serving as an homage to the Starship Enterprise from Star Trek was listed 20 miles outside of Pittsburgh for just $159,000.

The property itself is an unremarkable suburban house with a brick exterior, but as often happens with plain properties, there is more beneath the surface: a “sunken living room,” starship bedrooms, a dining room made to look like a command center, and most notably, a talking alien who pops out of a wall and greets people.

A home that is also a village

What appears to be a typical listing for a mansion in suburban Washington, D.C. revealed just how far one can go for a passion project. A car lover and father of three, the owner built an entire mini-village in the basement as a space for his kids to hang out.

It sits at 32 feet by 38 feet and has cobblestoned roads stretching past antique shop fronts, a post office and even a vintage movie theater with posters showing screenings for Mary Poppins and The Exorcist.

The largest closet in the country

A Houston home frequently featured in shows and magazines for having “the largest closet in America” finally found a buyer after six years on and off the market. Teresa Roemer, a Texas socialite regularly called “the real housewife of Houston” had built a closet that took up three stories and over 3,000 square feet of space.

Rapper Gucci Mane featured the closet in the music video for “Nonchalant” while, in 2018, a robber broke into the house and stole over $800,000 worth of jewelry and handbags. The last asking price, updated in 2020, was $6.49 million.

In July, a 156-year-old former gold mining town in Arizona went on the market for $1.25 million. Nestled in the hills of Prescott National Forest, Cleator had attracted gold miners during the Gold Rush but has since been abandoned by all but only a handful residents.

A local real estate company listed the 40-acre town in its entirety — the new owner could revive its remaining dive bar and mercantile or take advantage of mining rights which, with the ability to rename the town, also come with the purchase.

A home that doubles as a jail

An 1875 building that was a functioning jail as late as the early 2000s came on the market in Missouri in August. With an asking price of $350,000, the property has a main property that leads to an adjoining brick jailhouse.

It was, over the years, the home of overseeing sheriffs (the last one lived on the property until 1991) and soon went viral online. Users wrote up purposes it could serve, from locking up kids who are not studying at home during the pandemic to a “sex dungeon.”

If you’ve ever dreamed of living in a convent or a monastery, now could still be your chance. A 21,911-square-foot Annapolis, Maryland, property that once served as home to a group of Franciscan friars came on the market earlier this year for $25 million.

The 23-acre estate was built by wealthy World War I shell-casing-maker-later-turned-bootlegger E. Bartlett Hayward in the 1920s. The house has undergone several renovations and had many different owners but its connection to the friars, who lived in it during the 1950s, cause it to be marketed as a monastery most often.

While celebrity homes often make the news for being overpriced and extravagant, Disney Channel star Bella Thorne listed a fairly reasonably priced (for Los Angeles) home for $2.49 million in August.

When Thorne bought it in 2016, it was a simple two-story home with an unassuming exterior. But during her time there, Thorne had added vivid personal touches — bright pink exterior and a psychedelic mural inside — that made it go viral on social media.

The award-winning Canadian show Schitt’s Creek dominated the Emmys with multiple wins this year. As the show grew in popularity, the real-life property outside of Toronto used to film the infamous “Rosebud Motel” where the Rose family is forced to stay after losing their fortune started attracting tourists. The owner had long been planning to put it on the market but decided to hold off amid the coronavirus outbreak.

A house made of beer

A former Navy veteran spent 16 years of his life lining the walls of his Florida condo with empty Budweiser cans. The result, in which every inch of the two-bedroom space was covered with Budweiser cans, brought about a major bidding war when Amelotte passed away and the property hit the market in September.

Someone made an offer that was $100,000 over the asking price while the company Budweiser offered whoever buys the house free beer for life so long as the do not alter the interior.

A Louisville home that was once a church and a later robber hideout went viral after producer and video game enthusiast Pat Ashe retweeted its listing photos with the caption “my game of the year so far is the 3D walkthrough of this house.”

Twitter users compared it to a Pac-Man maze full of obstacles such as wall-to-wall boxes of old recordings of Girls Gone Wild, 1990s games cartridges and boxes of Monster energy drinks. Before the owners and the agent knew it, video game fans were creating virtual scavenger hunts with photos from the listing.

A listing that keeps coming back from the past is outgoing president Donald Trump’s childhood home in Queens, New York. The Tudor-style estate first started getting attention after Trump’s inauguration in 2017 when an investor bought it, decked it out in Americana memorabilia and tried to rent it out on Airbnb for $800 a night.

But despite the media coverage, the house mostly stood empty, did not attract a buyer and unsuccessfully went to auction. In November, Trump fans tried to raise $3 million to purchase the property and give it to Trump as a gift.

Known to interior design fans as the Perry Apartment, an extravagant New York penthouse owned by designer Lisa Perry and her hedge-fund billionaire husband Richard C. Perry appeared on the market for $45 million in November.

During their time living there, the Perrys undertook a renovation to make it as gallery-like as possible. Some of its most famous pieces include an emerald ring sculpture on the terrace and a pop art painting in between windows onto the city. That said, the artwork that made the apartment so cool will remain with the Perrys and is not part of the listing.

Container house in the sun

At the end of the year, a house made of shipping containers pointing in different directions hit the market for $3.2 million. Known as the Starburst Container House, the architecturally innovative home was envisioned to look like a star in the desert by London-based architectural firm Whitaker Studio.

It is still in the process of being built and the completion date can be months away but that did not stop the home from becoming a hit on Instagram.

Dallas 'mansion' with no bedrooms, windows mocked on social media

David Hasselhoff's dermatologist is selling a mansion full of NFT art
Back to top
Network with CoStar, Redfin, Realogy, SERHANT., Divvy, and thousands more in-person at ICLV this October. Prices go up Sunday.Register Now×
Inmanpot
Log in
If you created your account with Google or Facebook
Don't have an account?
Create an Account
Forgot your password?
No Problem