While there, they changed what consumers nationwide will see when they look at real estate listings, made buyer agent compensation more transparent, declared a divisive symbol discriminatory, overhauled its governance structure and debuted a historically significant leadership team. Here are five main takeaways from the event:

Consumers will see the compensation offered to buyer brokers

On Monday, the NAR board of directors passed three MLS policies that were inspired by a now-scuttled antitrust settlement between NAR and the U.S. Department of Justice.

As of January 1, the policies prohibit agents and brokers from advertising their services as free unless they will not actually receive any compensation from anyone for them and ban them from filtering out listings from website displays based on buyer broker commissions or the name of the brokerage or agent.

The three policies are designed to better inform consumers, particularly buyers, about their role in compensating buyer brokers and agents. That role has become a flashpoint as NAR is currently defending itself from multiple antitrust lawsuits from homesellers and a homebuyer that seek to have homebuyers pay their broker directly, rather than have listing brokers pay buyer brokers from what the seller pays the listing broker — a move that could upend the U.S. real estate industry by effectively forcing changes in how buyer’s agents are traditionally compensated.

Last week, NAR launched a website to enlist its 1.5 million members to fight against these arguments in “the court of public opinion” by providing them with talking points and materials about how MLSs work and their benefits as well as the value of Realtors.

On top of that, the DOJ has launched an investigation of NAR’s MLS rules, including policies on buyer broker commissions and pocket listings, and NAR has sued the agency to stop the probe. NAR filed its latest volley against the DOJ in the middle of the conference, relying on the dictionary to make its point. The MLS policies’ approval positioned the trade group to be able to tout that it was complying with its end of the deal with the DOJ and the agency should do the same.

Before the board’s vote on Monday, some members of NAR’s MLS committee feared passing the buyer broker commission display policy would lead to more buyers asking for rebates and reduced commissions, while at least one committee member said,”  [T]hat’s exactly what should be happening.” The discussion prompted one of NAR’s attorneys to remind committee members to abide by the trade group’s commitment to antitrust compliance.

Per the new policy, brokers and agents using MLS feeds will not be required to display buyer broker commissions, so the policy’s impact may be muted depending on how many brokerages decide against display. In addition, in the wake of the settlement, at least 65 MLSs had already changed their rules to allow public display of buyer agent commissions.

The NAR board also approved a policy to require the display of a listing broker’s phone number or email address next to listings on agent and broker websites, after stripping the proposal of its most controversial aspects. Previously NAR’s MLS policy only required display of the name of the listing firm.

A controversial suggestion to require listing agent attribution on IDX and VOW sites and language in the original proposal to display the contact information of the listing firm “at least as prominently as any other contact information or lead form on the site,” were defeated at NAR’s Multiple Listing Issues and Policies Committee meeting on Saturday.

The battle this particular policy proposal prompted is only the latest in the industry’s complicated relationship with online listing display, which pits the desire of some listing agents to get every lead generated by their listing against the desire of buyer agents to represent those who want to buy those listings.

NAR, by way of its Professional Standards Committee, approved a case interpretation of its hate speech policy that makes display of the Confederate flag a violation of the Realtor Code of Ethics.

The case interpretation says that a Confederate flag displayed in listing photos could be “reasonably construed as indicating a racial preference or illegal discrimination based on a protected class” on the part of a listing broker.

The case interpretation prompted passionate debate before it was adopted, with some Realtors pointing to the subjectivity of symbols and others highlighting that the flag was a symbol of racial exclusion and should not represent Realtors.

NAR has heavily focused on fair housing in the last couple of years and adopted its hate speech policy a year ago just before issuing for the first time a historic, formal apology for past industry policies that contributed to segregation and racial inequality nationwide.

But that apology, like the Confederate flag case interpretation, was far from universally accepted among the trade group’s membership, the vast majority of whom have declined opportunities for fair housing training offered by NAR. At the conference, then-NAR President Charlie Oppler ended his one-year tenure by urging Realtors to continue to work toward closing the racial wealth gap. So far, he said, only 30,000 members — out of 1.5 million — have completed NAR’s fair housing Fairhaven training and 28,000 members have watched NAR’s implicit bias video.

Most policies will now be approved by a top committee, not the full NAR board

In an effort to make itself more nimble, efficient and transparent, NAR overhauled its board of directors, transferring some power from the NAR board overall to the board’s smaller Executive Committee, adding more director seats for small- and medium-sized local associations and requiring that directors, regional vice presidents and committee leaders satisfy certain qualification criteria.

The new board will grow to more than 1,000 directors, rather than being reduced in size, but will no longer have the responsibility of approving most committee recommendations as that duty will now belong to the new Executive Committee, with some exceptions.

The board of directors will still have the authority to approve the NAR annual budget, set dues and assessment levels, and approve committee recommendations that the NAR leadership team or the Executive Committee refer to the board “because of their import and impact on the industry” or that have been referred to the board by a petition signed by at least 20 percent of the directors. Anything previously decided by the EC can be reviewed afterwards by the NAR board and the board’s vote will be final, according to NAR.

The composition of the Executive Committee, which is a subset of the board of directors, will grow from 52 members to 71 members, largely due to the addition of 12 “competency-based members” appointed by the NAR leadership team based on their skills and expertise.

The new EC will meet a minimum of four times per year — either in person or virtually — and more at the request of NAR’s president, the board of directors, or any 11 EC members. The EC has to give at least 15 days notice to the NAR board in advance of each meeting. Contrary to current practice, the EC meetings would be open to any interested NAR members.

This means that fewer Realtors will be making most policy decisions, but those Realtors will make those decisions faster and in view of other NAR members. How the changes will impact the dynamics between the new EC and the new board remain to be seen, but it will be awhile before the changes fully kick in: not until 2024.

For the first time ever, most of NAR’s top leaders are female

Two-thirds of NAR’s membership is female and only seven women have ever been president of the trade group since its founding in 1908. The seventh is Leslie Rouda Smith, who was installed as 2022 president at the conference. She leads a team that is majority-female for the first time in NAR’s history. NAR’s seven-member leadership team for 2022 consists of Rouda Smith, President-Elect Kenny Parcell, First Vice President Tracy Kasper, Treasurer Nancy Lane, Vice President of Association Affairs Shannon King, Vice President of Advocacy Kaki Lybbert and Immediate Past President Charlie Oppler.

“Observing my dad in his leadership roles inspired me to get involved and to give back to the profession that means so much to me,” Rouda Smith said in a statement. “I think we should all strive to leave it better than we found it.” 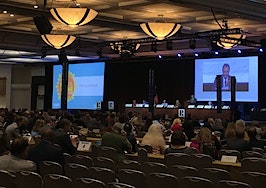 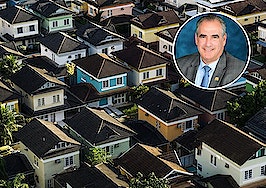 NAR's Oppler: The changes we agreed to with DOJ will take effect